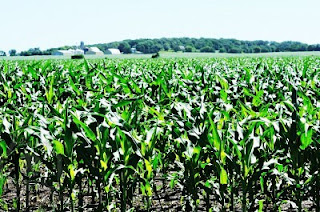 Monsanto has been quite happy to engage in continent wide experiments in biological manipulation with a merry ‘we will be all right Jack’ attitude.  The longer term effects can only be guessed at in the early stages and when they emerge actual retreat may simply be impossible.  This has always made me uncomfortable.

We drag our feet on experimental cancer cures for decades when those affected will be passing and not affecting others sooner than later even if it works.  Yet we run experiments on millions of acres and discover today that the rootworm is making a miraculous comeback.  The word stupid does not even begin to describe this level of willful negligence.  Perhaps Monsanto needs to be sued into bankruptcy to establish common sense.

That means that corn is going back to a biennial cycle in order to kill off the root worms.  Conservative practice would have mandated just that from the beginning.  Now we have freshly evolved root worms much more able to annoy us.

This is agricultural practice been modified by an optimistic seed salesman.  That has never been a good plan.

Rootworms defy Monsanto and eat away at GMO Corn in U.S. Midwest

(NaturalNews) Farmers in the big corn states watch in dismay as their "bug proofed" corn once again is being eaten by rootworms. As evolution would have it, the Western rootworm beetle, one of the most serious threats to corn, has developed resistance to the bioengineered "Roundup ready" crop, and is picnicking once again on corn roots.


Currently, three fourth's of our nation's corn crop are genetically modified, but thousands of farmers in the United States are wondering if they should switch back to older methods of pest control, like changing back and forth from corn to soy each year, because these rootworm beetles feed solely on corn. If the worms hatch in soybean fields they quickly die.


Farmer's options, unfortunately, are becoming more limited than in recent years. One major contention for farmers is that they face lawsuits if they try to save and replant genetically modified seed because they don't "own" the technology, yet most don't complain when they reap in the profits from the Roundup Ready crops.


In the , current estimates show that 30 of the 80 million acres of corn are infested with these corn rootworms. The United States Department of Agriculture estimates this infestation can cause a billion dollars in lost revenue each year. The Western corn rootworm was also brought to in the early 1990's. Most European countries now require labeling of imported GMO foods, but there's no such labeling in the . GMO veggies are sometimes referred to as a Trojan horse, and there's virtually no way to recall them should they "breed" their own crisis.


Over the past 15 years, Monsanto has built up its seed empire by focusing its technology on widely planted crops like corn, soy, and cotton. Large scale farmers of these commodities, operating on very thin profit margins, jumped at the chance to streamline their operations by farming out their pest management to Monsanto, but now the this is wearing thin. Dumping one kind of herbicide onto millions of acres of farmland has also given rise to "super weeds" that are resistant to that herbicide. Farmers are now resorting to highly toxic herbicide and pesticide concoctions, and some are even hand-weeding.

In case you're not in the know, Monsanto corn is a wicked, laboratory created combination of toxic pesticide and seedlings, and the end result is what many organic consumers nicknamed Franken-corn. According to the Journal of Pesticide Reform , Roundup's active ingredient glyphosate can cause eye and skin irritation, dizziness, heart palpitations, salivary lesions, and stomach lining irritation.


A 1998 study on mice concluded that Roundup is able to cause genetic damage. A 2011 report by Earth Open Source asserts that glyphosate has caused birth defects in laboratory animals. So, should humans really be eating fruits and vegetables that genetically contain this pesticide?


In addition to unwanted vegetation, glyphosate inhibits growth and development of mycorrhizal fungi, the microbe that fixes nitrogen in the soil and makes it available to plants, so this soil is now tainted for years. Glyphosate has also been linked to genetic damage, cancer, and negative reproductive effects, like miscarriage and reduced sperm count.

The latest "solution" is to genetically modify crops to resist the weed killer 2,4-D, which has exponentially more toxicity to mammals than Roundup. Initially formulated for weed control in 1947, 2,4-D is comprised of 50% of the ingredients in Agent Orange, which is infamous for its massive destructiveness in .


For now, it seems as though nature herself is pulling in the reigns. Just as Roundup-resistant super weeds rapidly bloomed into a major problem over the past ten years, the new super insects may be just getting started.

Attack of the Monsanto Superinsects\

Over the past decade and a half, as Monsanto built up its globe-spanning, multi-billion-dollar genetically modified seed empire, it made two major pitches to farmers.

The first involved weeds. Leave the weed management to us, Monsanto insisted. We've engineered plants that can survive our very own herbicide. Just pay up for our patented, premium-priced seeds, spray your fields with our Roundup herbicide whenever the fancy strikes, and—voilà!—no more weeds.

The second involved crop-eating insects. We've isolated the toxic gene of a commonly used bacterial pesticide called Bt, Monsanto announced, and spliced it directly into crops. Along with corn and soy, you will literally be growing the pesticide that protects them. Plant our seeds, and watch your crops thrive while their pests shrivel and die.

Monsanto focused its technology on three widely planted, highly subsidized crops: corn, soy, and cotton. Large-scale farmers of these commodities, always operating on razor-thin profit margins, lunged at the chance to streamline their operations by essentially outsourcing their pest management to Monsanto. And so Monsanto's high-tech crops essentially took over the corn/soy- and cotton-growing regions of the country.

But now the pitches are wearing thin. Dumping a single herbicide onto millions of acres of farmland has, predictably enough, given rise to weeds resistant to that herbicide. Such "superweeds" are now galloping through cotton and corn country, forcing farmers to resort to highly toxic herbicide cocktails and even hand-weeding. More than 11 million acres are infested with Roundup-resistant weeds, up from 2.4 million acres in 2007, reckons  weed expert David Mortensen.

And now insects are developing resistance to Monsanto's insecticide-infused crops, reports the Wall Street Journal. Fields planted in Monsanto's Bt corn in some areas of the Midwest are showing damage from the corn rootworm—the very species targeted by Monsanto's engineered trait. An scientist has conclusively identified Bt-resistant root worms in four fields, the Journal reports.

The findings are not likely isolated to those fields—just like spotting a cockroach on your kitchen floor probably signals an infestation, not that a lone cockroach randomly stumbled in for a visit. Sure enough, farmers in are also seeing severe rootworm damage in fields planted in Monsanto's Bt corn. And it's not just in the : In 2010, Monsanto itself acknowledged that in industrial-agriculture regions of , where Monsanto's Bt cotton is a dominant crop, a cotton-attacking pest called the bollworm had developed resistance.

Just as Roundup-resistant superweeds rapidly bloomed into a major problem after first appearing in the mid-2000s, Bt-resistant superinsects may be just getting started. Colleen Scherer, managing editor of the industrial-ag trade magazine Ag Professional, put it like this: "There is no 'putting the genie back in the bottle,' and resistance in these areas is a problem that won't go away."

So what does all of this mean for Monsanto? If its main attraction for farmers—the promise of easy pest management—is turning to dust in a quite public way, should we expect the company be on the verge of getting crushed under the weight of its failures?

To get a glimpse of how the publicly traded company is faring, I looked at how its stock has been performing over the past year, compared to the broader stock market. Early Monday afternoon, Monsanto's shares were trading at about $71—a more than 25 percent gain over the past 12 months. Over the same period, the S&P 500—a broad gauge of US stocks—is up just over 10 percent. That means investors have high hopes for Monsanto going forward, despite the high-profile failures. Like weeds and bugs in farm fields, Monsanto shares have developed resistance to toxic tidings.

What gives? The Wall Street Journal article provides a clue:

The [Bt-resistance] finding adds fuel to the race among crop biotechnology rivals to locate the next generation of genes that can protect plants from insects. Scientists at Monsanto and Syngenta AG of Basel, Switzerland, are already researching how to use a medical breakthrough called RNA interference to, among other things, make crops deadly for insects to eat. If this works, a bug munching on such a plant could ingest genetic code that turns off one of its essential genes.

In other words, Monsanto claims it has the answer to the trouble it's cooking up on corn, soy, and cotton fields: more patent-protected GM technology. It has managed to shove US farmers on a kind of accelerating treadmill: the need to apply ever more, and ever more novel, high-tech responses to keep up with ever-evolving pests. And while farmers run ever faster to stay in place, Monsanto just keeps coming up with highly profitable "solutions" to the problems it has generated.

Investors have embraced Monsanto's pitch. Large-scale farmers, battered and desperate for relief, probably will too. But the broader citizenry, in the form of the regulatory agencies thatostensibly guard the public interest, should start asking hard questions.