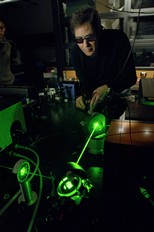 This design concept appears to plausibly solve the roadside bomb detection problem.  Link that bit of detection with a computer driven dynamic search program and the weapon may end up put out of business.

Inasmuch as the IED has been the only creditable response available to the Islamic insurgent along with the suicide bomber, we may have the system that stops them cold.  Recall that the only reason these methods are deployed at all is because all conventional methods fail miserably.

I recall a heads up knock down confrontation in Kandahar during the initial deployment of NATO forces there in which I suspect that the Taliban were suckered into and in which they took over five hundred casualties in a tactical box against minimal casualties for NATO.  That was effectively the one and only instance of conventional methods attempted by the Taliban.

Now we can expect to remove their remaining weapon of any significance with this new protocol.  It will certainly take some time to develop and deploy but I hope it gets the priority it deserves.

Approximately sixty percent of coalition soldier deaths in and are due to improvised explosive devices (IEDs), placed along the roads. Because these bombs are often planted in public areas, it is important to detect them in a way that doesn't harm the surrounding infrastructure, or unnecessarily require civilians to evacuate nearby buildings. Researchers from believe that a laser-based system that they developed could fit the bill.

The laser itself is similar in output to a simple presentation pointer. Used in conjunction with a camera, it would direct both short and long pulses of light at suspicious objects or areas. The short molecules cause the molecules of explosive substances to vibrate, while the longer pulses are used to "read" those vibrations, which are unique to each explosive substance.

One of the challenges of field detection of explosives is the fact that there are so many similar chemical compounds present in the environment, and they can mask the sought-after molecules. Using the laser system, however, even a billionth of a gram of explosives can reportedly be detected.

The Michigan State technology is now being developed by spin-off companyBioPhotonic Solutions. A similar system is currently being researched at Princeton University.

, — A research team at has developed a laser that could detect roadside bombs – the deadliest enemy weapon encountered in and .

The laser, which has comparable output to a simple presentation pointer, potentially has the sensitivity and selectivity to canvas large areas and detect improvised explosive devices – weapons that account for around 60 percent of coalition soldiers’ deaths. Marcos Dantus, chemistry professor and founder of BioPhotonic Solutions, led the team and has published the results in the current issue of Applied Physics Letters.

The detection of IEDs in the field is extremely important and challenging because the environment introduces a large number of chemical compounds that mask the select few molecules that one is trying to detect, Dantus said.

“Having molecular structure sensitivity is critical for identifying explosives and avoiding unnecessary evacuation of buildings and closing roads due to false alarms,” he said

Since IEDs can be found in populated areas, the methods to detect these weapons must be nondestructive. They also must be able to distinguish explosives from vast arrays of similar compounds that can be found in urban environments. Dantus’ latest laser can make these distinctions even for quantities as small as a fraction of a billionth of a gram.

The laser beam combines short pulses that kick the molecules and make them vibrate, as well as long pulses that are used to “listen” and identify the different “chords.” The chords include different vibrational frequencies that uniquely identify every molecule, much like a fingerprint. The high-sensitivity laser can work in tandem with cameras and allows users to scan questionable areas from a safe distance.

“The laser and the method we’ve developed were originally intended for microscopes, but we were able to adapt and broaden its use to demonstrate its effectiveness for standoff detection of explosives,” said Dantus, who hopes to net additional funding to take this laser from the lab and into the field.

This research is funded in part by the Department of Homeland Security. BioPhotonic Solutions is a high-tech company Dantus launched in 2003 to commercialize technology invented in a spinoff from his research group at MSU.
Posted by arclein at 12:01 AM