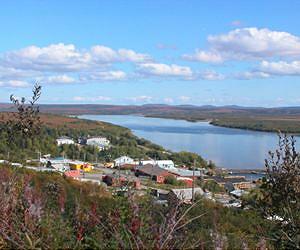 There is one thing that is correct about the past two decades in the science of climate change and it is that the is presently out of the deep freeze.  Multi year sea ice has been eliminated allowing a somewhat moderated Arctic climate.  It still is not fully implemented but this report from the Alaska Interior informs us that conditions have actually improved and if sustained we can expect an improvement in the biomass.

While many wish to cast this all as a problem it is not.  A problem will be the return of historic conditions as prey populations collapse.

We do not know why the is warmer and it would be really nice to confirm that present conditions compare to those of the medieval optimum.  Then we could be certain that what is been experienced is not unique at all.

It is curious that the legendary that was known from medieval folk sources and inspired exploration two centuries ago is now wide open and quite usable for the past five years or so.

The where USGSscientists conducted interviews with hunters and elders to document their observations of climate change. The village lies in the on the banks of the , a tributary of the . Photo Credit: School District of

Personal interviews with Natives in the provide unique insights on climate change and its impacts, helping develop adaptation strategies for these local communities.

The USGS coordinated interviews with Yup'ik hunters and elders in the villages of St. Mary's and Pitka's Point, , to document their observations of climate change.

They expressed concerns ranging from safety, such as unpredictable weather patterns and dangerous ice conditions, to changes in plants and animals as well as decreased availability of firewood.

"Many climate change studies are conducted on a large scale, and there is a great deal of uncertainty regarding how climate change will impact specific regions," said USGS social scientist Nicole Herman-Mercer. "This study helps address that uncertainty and really understand climate change as a socioeconomic issue by talking directly to those with traditional and personal environmental knowledge."

By integrating scientific studies with indigenous observation, these multiple forms of knowledge allow for a more comprehensive understanding of the complex challenges posed by climate change.

The indigenous knowledge encompasses observations, lessons and stories about the environment that have been handed down for generations, providing a long history of environmental knowledge. These observations can also help uncover new areas for scientists to study.

The and Subarctic are of particular interest because these high latitudes are among the world's first locations to begin experiencing climate change.

The most common statement by interview participants was about warmer temperature in recent years. It was observed to be warmer in all seasons, though most notably in the winter months.

The considerable thinning of ice on the and in recent years was the topic of several interviews. Thin river ice is a significant issue because winter travel is mainly achieved by using the frozen rivers as a transportation route via snow machines or sled dogs.

Thinning ice shortens the winter travel season, making it more difficult to trade goods between villages, visit friends and relatives, or reach traditional hunting grounds. One interview participant also discussed how the Andreafsky River, on whose banks their village lies, no longer freezes in certain spots, and several people have drowned after falling through the resulting holes in the ice.

The unpredictability of weather conditions was another issue of concern, especially since these communities rely on activities such as hunting, fishing and gathering wild foods for their way of life. One does not want to "get caught out in the country" when the weather suddenly changes.

Vegetation patterns were also observed to be shifting due to the changes in seasonal weather patterns, and this leads to increased difficulty in subsistence activities. Interviews showed the unpredictability from year to year on whether vegetation, particularly salmonberries, could be relied upon.

Those interviewed spoke of a change in the range of species of mammals (moose and beaver) as well as a decrease in the number of some bird species (ptarmigan). This is of special concern because of the important role these animals play in the subsistence diets of Natives. Many also rely on hunting or trapping for their livelihoods.

Participants also discussed lower spring snowmelt flows on the Andreafsky and Yukon Rivers, meaning less logs are flowing down the river. This hampers people's ability to collect logs for firewood and building materials, placing a strain on an already economically depressed region through increased heating costs and reliance on expensive fossil fuels.

An article on this topic was published in the journal, Human Organization. The full article with additional quotes and observations from indigenous people is available online.
Posted by arclein at 12:01 AM