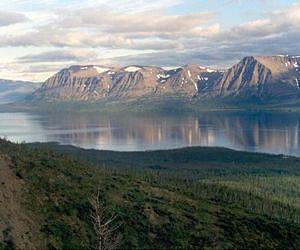 The impact of the Siberian traps through CO2 release is well established and appears to be the largest such event impacting on ancient climates.

A smaller comparable is .  Little ash is put into the atmosphere but plenty of nasty gases are.  Thus it is reasonable to expect the same from these mega flows.

I suppose that the good news is that these flows work themselves out in geological time allowing life to normally get out of the way.  That is not so true for the super volcanoes that flood the atmosphere with ash that is picked up globally.  Even those have turned out to be survivable.

The take home is that massive geologic CO2 release and large asteroids are the two prime culprits for mass extinctions that do not entail the rejoining of two continents or mankind’s own folly.

Fortunately both are rare enough to effectively show up once each in enough strength.

The cause of Earth's largest environmental catastrophe

The eruption of giant masses of magma in 250 million years ago led to the Permo-Triassic mass extinction when more than 90 % of all species becameextinct.

An international team including geodynamic modelers from the GFZ German Research Centre for Geosciences together with geochemists from the J. Fourier University of Grenoble, the Max Plank Institute in Mainz, and Vernadsky-, Schmidt- and Sobolev-Institutes of the Russian Academy of Sciences report on a new idea with respect to the origin of the Siberian eruptions and their relation to the mass extinction in the recent issue of Nature (15.09.2011, vol. 477, p. 312-316).

Large Igneous Provinces (LIPs) are huge accumulations of volcanic rock at the Earth's surface. Within short geological time spans of often less than one million years their eruptions cover areas of several hundred thousand square kilometres with up to 4 kilometers thick lava flows. The Siberian Traps are considered the largest continental LIP.

A widely accepted idea is that LIPs originate through melting within thermal mantle plumes, a term applied to giant mushroom-shaped volumes of plastic mantle material that rise from the base of the mantle to the lithosphere, the Earth's rigid outer shell.

The high buoyancy of purely thermal mantle plumes, however, should cause kilometer-scale uplift of the lithosphere above the plume head, but such uplift is not always present. Moreover, estimates of magmatic degassing from many LIPs are considered insufficient to trigger climatic crises. The team of scientists presents a numerical model and new geochemical data with which unresolved questions can now be answered.

They suggest that the Siberian mantle plume contained a large fraction of about 15 percent of recycled oceanic crust; i.e. the crust that had long before been subducted into the deep mantle and then, through the hot mantle plume, brought back to the Earth's lithosphere.

This recycled oceanic crust was present in the plume as eclogite, a very dense rock which made the hot mantle plume less buoyant. For this reason the impingement of the plume caused negligible uplift of the lithosphere.

The recycled crustal material melts at much lower temperatures than the normal mantle material peridotite, and therefore the plume generated exceptionally large amounts of magmas and was able to destroy the thick Siberian lithosphere thermally, chemically and mechanically during a very short period of only a few hundred thousand years.

During this process, the recycled crust, being exceptionally rich in volatiles such as CO2 and halogens, degassed and liberated gases that passed through the Earth crust into the atmosphere to trigger the mass extinction. The model predicts that the mass extinction should have occurred before the main magmatic eruptions. Though based on sparse available data, this prediction seems to be valid for many LIPs.