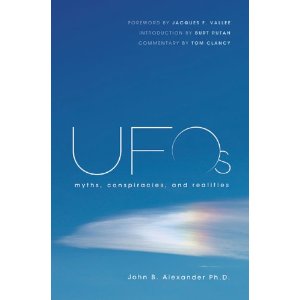 The UFO crowd has been alleging a cover up by agencies of the government from the very beginnings in the early fifties.  As this informant shows us, there is scant evidence of such.  The problem is that we have ample evidence of UFOs and scant evidence of any governmental agency accomplishing anything at all while maintaining an astonishing cloak of secrecy.  His conclusion is that the government is not involved consciously at all and that certainly fits the data.

The UFO presence is well able to take care of its own laundry.  Assuming their own operatives and we have all we need to explain known encounters without ever recruiting a government employee.    We already understand that the UFO presence has a huge and active investment on this planet once we cross the threshold of accepting their reality.  In fact it appears to be steadily increasing in preparation for our emergence as a space traveling civilization.

This may be disturbing but I see little cause for concern.  Information sharing through the internet is nearly complete with all of humanity and the toxins of natural human aggression are been slowly eased as the greater reality becomes more apparent.

Some noteworthy data is provided here and confirmed with this investigator’s efforts.  Note my underlined passages.

My own review of the established data supports active large underground bases on earth that are typically accessed through underwater entrants.  That is the obvious way to prevent accidental intrusion from us.  This also explains the actual traffic substantially beyond the demands of simple surveillance.

Establishing a physical agency throughout our population is a natural operation also and the men in black scenario is natural step.  In the past, I have posted my curiosity on why this was not been done.  If we can cleanly eliminate the government, then our answer is an ET presence.

He also makes the comment that this all may not be extraterrestrial at all.  This loudly echoes my own conjecture that the whole ET – UFO phenomena is terran sourced from the first human scientific emergent era dating from 40,000 BC to 15,000 BC when the Pleistocene Nonconformity was triggered.  Google this site for details.

I suspect that we either will produce a UFO in three decades at most and go knock on their doors and be welcomed or they will actually decide to let us know.  Let us hope that it is sooner than later.

-- It's been more than 20 years since a Las Vegan made a splash in the strange world of UFO's. Back in the late 80's, a man named Bob Lazar told wild stories about weird craft being tested at Area 51, and his story is still reverberating around the world.

Now, another local man has caused a furor among those who follow the UFO subject. He's a former Army intelligence officer, well known to 8 News NOW viewers, who used his contacts in government to track down saucer rumors.

"They are very real phenomena. I think we need to understand this will lead to a different understanding of how the universe is built," said Dr. John Alexander.

Dr. Alexander is skeptical by nature, but not about UFO's. After many years of stalking the topic through the corridors of power in Washington and the far-flung nooks and crannies of the military industrial complex, the former military intelligence officer is convinced that some of the objects seen in the skies are alien in origin and deserve to be studied.

"UFO's are real and I'm talking about physical reality. There are craft that are seen, balls of light flitting around, to craft -- some of them a mile and a half across. They show up on radar and are really here," he said.

But despite his acceptance of the basic UFO story, Alexander is viewed with suspicion and scorn by the pro-UFO crowd, "a real life man in black" someone called him. His frequent trips to UFO conferences are often met with overt hostility and tough questions.
"The true believers are even more hostile than the skeptics. If you don't believe their particular brand, whatever that is, you become the enemy. You've got to buy every bit of it otherwise you are part of the cover up, and blah, blah, blah," he said.

Alexander's blasphemy is that he doubts there is an active cover up by the government. In his new book,UFO's: Myths, Conspiracies and Realities, he describes his lengthy search for the keepers of the secrets.

While still on active duty with the Army, Colonel Alexander got the green light to create the military's only UFO working group, tasked with finding where the reports all go and who might be holding material from crashed saucers. He met with the CIA, DIA, NSA, Pentagon, as well as civilian heavyweights like Edward Teller, father of the hydrogen bomb, and Ben Rich of Lockheed's Skunkwords.

"Our supposition was there's got to be a back program someplace, someone minding the store, and over time, a series of meetings, everyone was interested but no one said they were doing it. It was always someone else," said Alexander. "I talked to the head or deputy of all the lettered agencies you know, some that you don't, and it was consistent across the board."

Contrary to the government's public position, Alexander says he found broad interest in UFO's within intelligence agencies and the military, including many top officials who have had their own experiences. But if there's a warehouse filled with UFO secrets, he never found it, and his conclusion that there is no active cover up has led to accusations that he is part of the conspiracy.

"My premise is we're not even to the point of asking the right questions. But the UFO community has decided what the answers should be," he said.

To extend his blasphemy even further, Alexander thinks UFO's are not necessarily extraterrestrial. The ultimate truth, he says, could be much more complicated. At a minimum, Alexander argues, people should be allowed to study this without fear of ridicule.

"We need to make it permissible for a look at the very real phenomena, but to do so without risking your career or livelihood. This is a tar baby, if you get associated with it, and I can show you the scars," he said.
Posted by arclein at 12:01 AM