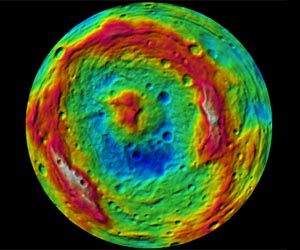 We should learn after all these years.  Every time we get to inspect a new object in space we discover our assumptions and opinions to be utterly useless.  We get awed instead.

Vesta is no exception and Ceres promises to be even more unusual.

Check out the video and the images.

Vesta an asteroid full of surprises

Varied impact craters, valleys, canyons and mountains among the highest in the Solar System - the 3D images and videos of the asteroid Vesta created byscientists at the German Aerospace Center (Deutsches Zentrum fur Luft- und Raumfahrt; DLR) reveal a most unusual celestial body. The Dawn spacecraft, carrying a German camera system on board, has been orbiting the asteroid since July 2011.

Here is a video of the surface of vesta as it rotates in front of the camera.

"Vesta has totally surprised us," says Ralf Jaumann, Head of the Planetary Geology Department at the DLR Institute of Planetary Research in Berlin-Adlershof. The topographical maps are necessary to study the asteroid, whose orbit lies between those of Mars and Jupiter.

The latest 3D images, which show the whole asteroid, make something very clear - Vesta holds quite a number of challenges for the scientists on the Dawn team. "For example, we can see a very large impact crater in the south polar region, the likes of which we have never seen before," emphasises Jaumann. The shape and structure of the crater differ from every other impact crater in the Solar System. "We are unable to find similar craters on other bodies, and cannot yet explain exactly what has caused it."

Another critical question faced by the planetary scientists is whether or not there has been volcanism on Vesta. The numerous impact craters are not making this easy for scientists. "Any evidence of volcanic activity has been covered by impact ejecta and our current challenge is to find traces of volcanic deposits," explains Jaumann.

Dark material associated with craters that appears in some of the 3D images might provide the scientists with information on potential volcanic activity. But it could also be the remnants of the impacting body, in which case, the search for signs of volcanism must continue.

Anaglyph: landscape with craters If an explanation could be found for the features that appear on the images and video obtained from orbit at an altitude of 2420 kilometres, the scientists would be considerably closer to fulfilling the aim of the Dawn mission.

The asteroid could provide information about the birth of the Solar System. When the planets were forming, about 4.56 billion years ago, Jupiter's gravitational field ensured that no large bodies could form in a 200 million kilometre wide corridor.

The result was the Main Asteroid Belt with its unfinished planets - including Vesta, which is thought to have melted briefly after its formation but has not changed chemically since its early cooling. The Dawn spacecraft is therefore visiting a celestial body that will provide an insight into the SolarSystem's past for the very first time.

"On the dynamic Earth, all traces of the early days of the Solar System have disappeared, the Moon is younger, and Mars is too weathered to draw any conclusions," explains Jaumann. "But Vesta offers us the key to obtaining this knowledge."
Valleys, canyons, craters

An initial step to learning about the past of the Solar System lies in the 3D models computed by DLR planetary geologists from the camera images. The third dimension - that is, taking altitude into consideration - is allowing researchers to study the asteroid with greater precision and is causing great surprise among the scientists: "We had not expected such a complex geology.

The topography alone, with differences in altitude of up to 20 kilometres, suggests a powerfully dynamic surface formation process, as does the diversity and large number of impact craters, valleys and canyons that cover Vesta, and the great differences in the brightness of the surface materials," says Jaumann.

"It will take time and effort to decipher Vesta's secrets, but thanks to the excellent data obtained with Dawn, we have already succeeded in creating the cartographical basis for the continuing investigation of Vesta."

At present, scientists have,not only determined the asteroid's axis of rotation, but have also defined a prime meridian. This has enabled the establishment of a consistent system of coordinates, whereby Vesta - like Earth - is divided into a network of longitudes and latitudes. The new data acquired by Dawn as it orbits is permanently being incorporated into the existing cartography.

"An excellent camera system is essential for mapping Vesta, and it was developed in Germany under the leadership of the Max Planck Institute for Solar System Research (Max-Planck-Institut fur Sonnensystemforschung; MPS). The camera system has not only enabled the Dawn spacecraft to navigate to Vesta and safely enter orbit, but also to capture images of the surface with exceptional precision," explains Andreas Nathues, head of the camera team at MPS.

"To understand the origin and evolution of Vesta, it is necessary to investigate the pronounced colour variations on its surface, which will enable us to draw conclusions regarding its composition. We have only just begun to carry out this complex research."

In July 2012, the Dawn spacecraft and its German camera system will continue their journey to a new target, Ceres, which they will reach in February 2015. Whereas Vesta is a 'dry' asteroid whose lighter constituents have been vapourised as a result of its volcanic past and proximity to the Sun, Ceres is the exact opposite. It is thought to have a water content of between 15 and 25 percent and is therefore considered to be a 'wet' asteroid. The camera will again image the surface of the asteroid and create an atlas.

"Asteroids are witnesses to the formation of the Solar System, so they are of particular interest for researchers. Vesta and the asteroid Ceres, considered one of the minor planets, are the largest bodies in the Asteroid Belt and are the links between the small building blocks of the Solar System and the Earth-like planets. Dawn will enable us to study two asteroids in detail and at very close quarters for the first time," says Tilman Spohn, Director of the DLR Institute of Planetary Research.

"At DLR, Dawn is one of the most important elements in our asteroid research programme and one of the most significant collaborations with NASA and our research colleagues in the . The initial results confirm what we see again and again - things are never as we thought they would be before actually getting there."

For the scientists on the international Dawn mission, the data acquired so far indicates one thing above all: "The task now is to understand what we are seeing on Vesta," says Ralf Jaumann.

NASA's Jet Propulsion Laboratory (JPL), which is a division of the California Institute of Technology based in Pasadena, California, manages the Dawn mission to Vesta and Ceres for NASA's Science Mission Directorate in . The of , , is responsible for overall Dawn mission science.

The camera systems on the spacecraft have been developed and built under the leadership of the Max Planck Institute for Solar System Research, Katlenburg-Lindau, Germany, with significant contributions by the DLR Institute of Planetary Research, Berlin, and the Institute of Computer and Communication Network Engineering, Braunschweig. The Framing Camera project is funded by the Max Planck Society, DLR and NASA/JPL.
Posted by arclein at 12:01 AM