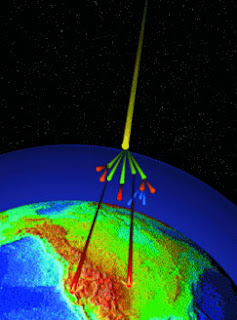 We have already reported on this story, but goes a bit into the history of it all.  We now have a compelling model for abrupt global cooling that fits the data and requires little in terms of earthly contribution which is wonderful news.`  Please note that I am not calling this a model for global warming.  Left on its own and maintaining the output experienced over the past two decades, the earth will warm up to a degree warmer than the present over the next few years.

The problem only begins when the solar activity drops of as usually expressed in a collapse in sunspot activity and a reduction in the strength of the solar magnetic field allowing a jump in cosmic rays.  That is when the Rhine and the and the freeze over.  As I have posted in the past, this cycle seems to be a thousand years long  and appears to be repeated in the scant records available over five thousand years.

What we can now be comfortable with is that we have a first class driver that is now proven to work on our atmosphere in a manner that dwarfs CO2 guesses. The 20-year-long global warming debate is in its final stages, the controversy having been settled over whether manmade causes such as carbon dioxide or natural causes such as the Sun dominate climate change on Earth.

First, the global warming doomsayers lost the argument in the court of public opinion — barely one-third of the public, for example, now believes that human activity can lead to dangerous warming.

Then, the doomsayers lost the economic argument when attempts to develop renewable energy proved utterly futile. The world is instead rapidly developing its fossil fuels, recently discovered to be so plentiful that they can meet mankind’s needs for centuries to come.

And now, the global warming doomsayers have lost their pretended monopoly on the official science. Their long-standing claim that only a scientific fringe denies the dominant role of humans — a claim that was never true — has ended. One of the world’s largest and most prestigious scientific organizations — more on that later — now formally opposes the IPCC’s official position that the Sun and other natural phenomena are all-but irrelevant to climate change.

To understand the nature of the IPCC’s just-ended scientific “monopoly,” place yourself in a meeting in in 1992, shortly after the IPCC was created, involving 130 delegates from 47 countries. In comes the Danish delegation with exciting findings from Danish scientists published just weeks earlier in the prestigious journal Science, showing a blockbuster correlation between solar activity and temperature on Earth. Not only did Science publish the findings, to make sure no one could miss their significance, Science trumpeted the findings in an accompanying article.

“Take a good look at the graph on this page, reproduced from a report that appears on page 698. It’s giving climatologists goose bumps,” Science’s accompanying article began. This “is the most striking correlation ever found between climate and small variations in solar activity — and the strongest suggestion ever of a casual link.” The article, entitled Could the Sun Be Warming the Climate?, suggested that the tables had now turned in the global-warming debate by including this assertion from a prominent scientist: “The burden of proof that something’s wrong [with the Danish correlation] almost rests with the detractors.”

What does the IPCC decide at that meeting when faced with this emphatic evidence that the Sun could be driving climate? The IPCC outright refuses to consider the Danish findings, saying it only has a mandate to investigate manmade causes of climate change. The IPCC and its followers then spent some $80-billion over the next two decades trying to establish that carbon dioxide and human activities explained climate change.

They came up empty-handed — they found not a scintilla of compelling evidence, absolutely nothing, that could pin more than a dollop or two of warming on human activities. All that the IPCC scientists have to show for their efforts are endless computer models that don’t work — the models have not only failed to predict the climate over the last 20 years, they can’t model the past climate when they are run backwards.

While this 20-year dead-end research was turning up failure after failure, the Danish science went from success to success. Geophysicist Eigil Friis-Christensen, a co-author of the startling Science study, continued his work with Henrik Svensmark and other Danish colleagues, making more and more progress and hypothesizing the mechanism through which the Sun heats and cools the planet. The answer could lie in the cosmic rays from beyond the solar system that continually bombard Earth, they surmised.

“You’ll never prove cosmic rays can seed clouds,” the IPCC establishment retorted, and embarked on a smear campaign to discredit the Danes. The Danes were accused, falsely, of having made arithmetic errors, of having mishandling data, even of having fabricated data.

But the Danes persevered. In 2006 they built a reaction chamber at the Danish National Space Centre, filled it with gases that approximated the composition of the lower atmosphere, added ultraviolet rays to mimic the rays of the Sun, and presto — the chamber soon filled with a vast number of floating microscopic droplets! These were ultra-small clusters of sulphuric acid and water molecules — the building blocks for cloud condensation nuclei — that had been catalyzed by the electrons released by the cosmic rays. “We were amazed by the speed and efficiency with which the electrons do their work,” Svensmark remarked of his breakthrough.

The scientists inside the IPCC bubble again discredited and discounted the Danes’ findings, using the authority of the IPCC, a United Nations agency with representation from the nations of the world, to trump the findings from tiny . But to their dismay, the IPCC — less a scientific body than a lobbying organization — was itself soon trumped by the European Organization for Nuclear Research, or CERN, a true scientific agency involving 60 countries and 8,000 scientists at more than 600 universities and national laboratories. CERN, which is best known for having built the Large Hadron Collider — a multi-billion-dollar instrument that collides subatomic particles head-on at very high energy to recreate the conditions just after the Big Bang — decided to build a Cadillac version of the Danish chamber. It did, releasing the results last week and validating Danish findings that point to the role of cosmic rays in seeding clouds. In doing so, it also buried future talk of carbon dioxide as a significant driver of climate change. For good measure, CERN also notes that independent satellite evidence points to the effect of cosmic rays on clouds.

Because of these and other discoveries, “climate models will need to be substantially revised,” CERN says, in its study and supplementary materials that mention various avenues worth exploring but carbon dioxide not once. Much more work will need to be done — CERN is now hot on the trail for what it believes is a missing ingredient in its recipe for the lower atmosphere, for example, and the Danes and others are also looking to the heavens, rather than to our coal plants and SUVs, in their quest to unlock the mysteries of climate change. As the lead author of the CERN study puts it, there is “strong evidence” that the Sun affects the climate through some mechanism, and “a cosmic ray influence on clouds is a leading candidate.” CO2 is not.

Lawrence Solomon is executive director of Energy Probe and Urban Renaissance Institute and author of The Deniers.

For CERN’s one-page description of the significance of its project, click here.
Posted by arclein at 12:01 AM

If this article is not a lie, then it is actually very close to it.

Here is what the scientists who did the cloud (NON) seeding experiment said:

Early results seem to indicate that cosmic rays do cause a change. The high-energy protons seemed to enhance the production of nanometre-sized particles from the gaseous atmosphere by more than a factor of ten. But, Kirkby adds, those particles are far too small to serve as seeds for clouds. "At the moment, it actually says nothing about a possible cosmic-ray effect on clouds and climate, but it's a very important first step," he says.