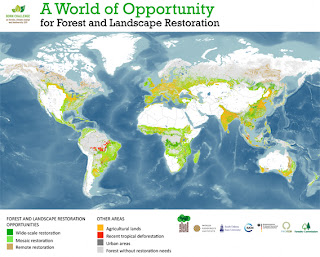 I never hesitate to support any initiative that pushes vigorous reforestation and even more importantly progressive forest management.  Proper forest management includes removing surplus production on an ongoing basis and that is the real challenge.

The Eastern USA and has seen a massive recovery of forests but generally minimal effort at management by private land holders.  The same will hold true everywhere else as the populations join the global middle class and subsistence lifeways are completely abandoned.

In short all our forests will be recovering sooner than later.  This is good news of course.

Yet a managed forests employs people and produces large tonnages of cellulose and a wide range of recognized forest products while providing a habitat not actually occupied by humanity.

My argument has been that the whole issue of forest tenure has to be rethought and made over into a proprietor and local government joint venture to provide the financial time frames that work for both parties.  In short, a township does benefit on the basis of century long time frames, while the local proprietor is limited to his career.  It has to be sorted out to optimize and retain value.

This applies everywhere.  It is utterly pointless to reforest a hillside in the tropics and not ensure local ownership and participation, particularly when the locals use firewood.  Yet international projects have been that stupid.

In the event, the numbers here are ambitious and for once the cause is excellent.  Even without been clever about it all, a lot can be done.

Conservationists and politicians meeting in on Friday launched a new initiative to restore 150 million hectares (580,000 square miles) of deforested and degraded forests, reports the World Resources Institute (WRI), an NGO that is involved in the effort.


" restoration is a big idea that carries many benefits. It will improve food security, enhance biodiversity, protect our climate, and generate jobs,” added Manish Bapna, interim President for WRI, in a statement. "With this new 150 million hectare target... we have a great opportunity to take action that will enhance the resilience of people and nature." 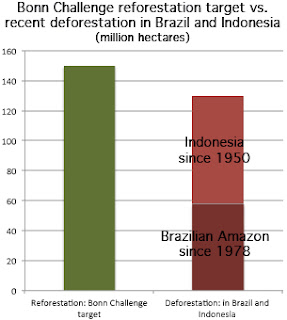 The Challenge reforestation target in comparison to recent deforestation in and . Data sources include INPE for and Forest Watch for .

WRI says the Bonn Challenge would help meet 2020 targets under the Convention on Biological Diversity (CBD) and the U.N. REDD+ program, which aims to reduce greenhouse gas emissions from deforestation and forest degradation.

Some 30 percent of global forest cover has been cleared in recent centuries, while another 20 percent has been degraded. Roughly one billion hectares of former forest lands are presently occupied by croplands and densely populated rural areas.

The new initiative won't seek to take current agriculture lands out of production, but WRI says some of these lands "would benefit from having trees planted in strategic places to protect and enhance agricultural productivity and other ecosystem functions."

The initiative's supporters hope it will be adopted as an official target by the U.N., governments, and other institutions.