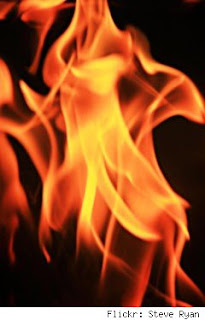 The only good thing that one can say about this type of phenomena is that it is incredibly rare.  This report pretty well brings this into the mainstream for everyone to look at.  For some reason the body burned out at a very high temperature that was sufficient to consume all volatiles immediately without causing them to set other objects on fire.  This is a pretty difficult trick to emulate in a lab setting, yet should be attempted.

Treating the human body as a large mass of fuel is alone problematic but not impossible.  The first difficulty comes from the water content which must consume enough heat to turn into vapor.  Yet we see little evidence of an immense release of steam in either this example or in other reports.  What has happened to the water itself?

Most combustion events first burn long enough to drive of the moisture and that then allows the volatiles to free up and burn.  This provides the necessary heat to complete the removal of everything except the carbon.  In the case cited, it appears that the temperature stayed low enough to prevent the carbon itself from burning significantly.  Yet in most other cases, the bulk of the carbon is itself consumed.

More curious is that collateral damage in all these events is minor or almost non existent.

The fact remains that anything that we know about combustion conflicts directly with the evidence presented.  On top of that, I do not know if this could be replicated in a lab kiln properly.

The combustion scenario that appears to describe what we see is that a high temperature ignition begins somewhere in the body.  This ignition point is so hot that it drives water of and begins to consume the dehydrated material in front of it.  We have an expanding fire front that steadily consumes the body mass.  In most cases the whole body is completely consumed as the temperature is high enough.  In some cases, as the last of the body is consumed, the temperature drops and combustion ends.  In the case cited, the temperature was never high enough to burn much of the carbon and we were left with a charred body mass.

This is all wonderful, except that somehow oxygen is supplied to make this all work.  Heat alone would simply produce a room full of volatiles and a nasty explosion.  The gallons of steam produced would also leave a pretty clear signature I would reasonably assume and I never hear any evidence of that at all.

It is almost as if somehow the water itself were giving up its oxygen to burn the other fuel.  Such a catalytic reaction would need to produce enough energy from the burning of the fuel to break out the oxygen and the hydrogen thus produced would also have to do something.  Thus the hypothetical reaction needs to be extracting the hydrogen preferentially to drive the oxygen liberation.  Since this is clearly all impossible in terms of our knowledge, it is hard to see where to go with it.  Yet that appears to be were the available evidence is taking us here.

By Benjamin Radford | LiveScience.com – 17 hours ago

Can people suddenly and inexplicably explode into a ball of fire?

It sounds like something in a horror film, but some people believe it happens. It's also what an Irish coroner recently concluded about the death of Michael Faherty, a 76-year-old Irishman who burned to death in his home in December 2010. There were scorch marks above and below the body, but no evidence of any gasoline, kerosene, or other accelerant. The coroner, Ciaran McLoughlin, reported: "This fire was thoroughly investigated and I'm left with the conclusion that this fits into the category of spontaneous human combustion, for which there is no adequate explanation."

Usually, of course, fires do not start on their own. When investigators are searching for the cause of forest fires they don't assume that the flame ignited itself, but instead that it was probably caused by a careless camper or a lightning strike. Though rare, spontaneous combustion has long been known to occur. Under the right circumstances many things can self-ignite on a hot day, including used rags containing oil or gasoline and piles of compost. Coal dust can also spontaneously ignite, one of many dangers that miners face.

But the claim that people can suddenly burst into flames for no apparent reason is a whole different matter. The best-known case of spontaneous human combustion (SHC) is actually fictional: in Charles Dickens's 1853 novel "Bleak House" a character explodes into fire. The phenomenon has also appeared in movies and on TV shows like "The X-Files."

But are there any confirmed real-life cases?

This is where things get trickier. Though some writers suggest that there are hundreds (or even thousands) of SHC cases throughout history, only about a dozen have been investigated in any detail. Researcher Joe Nickell examined many "unexplainable" cases in his book "Real-Life X-Files" and found that all of them were far less mysterious than often suggested. Most of the victims were, like the Irishman Faherty, elderly, alone, and near flames (cigarettes, candles, fires, etc.) when they died. Several were last seen drinking alcohol and smoking.

How could a body burn once it has ignited? If the person is asleep, intoxicated, unconscious, too weak, or otherwise unable to move or put the flames out, then the victim's clothes can act as a candle wick, drawing on the body's fat (which, because it is an oil, is flammable, and very near the skin's surface) to fuel the fire. Once a body starts to burn, it will continue to burn until the fuel (clothing, chairs, paper, body fat, etc.) is used up.

Michael Faherty's case may not be as mysterious as it looks. There was, after all, an open fire close to his burned body. It seems likely that a spark or ember might have popped from the fire onto his clothing, and caught his clothing on fire. It's not clear why the coroner conclusively ruled this explanation out.

If SHC is a real phenomenon (and not the result of an elderly or infirm person being too close to a flame source), why doesn't it happen more often? There are 5 billion people in the world, and yet we don't see reports of people bursting into flame while walking down the street, attending football games, or sipping a coffee at a local Starbucks. If spontaneous human combustion is a real — but very rare — phenomenon, statistically we should see far more cases. As it is, the only time when SHC is even suspected is in a very specific set of circumstances—usually ones that suggest a more logical explanation.

This story was provided by Life's Little Mysteries, a sister site to LiveScience.
Posted by arclein at 12:01 AM

I really don't understand why people are disturbed by using dead bodies as fuel. In my area a local crematorium has allowed a nearby swimming pool to use heat it generates. It seems like a very sensible idea to me

Over the years I've heard of these incidents. I have yet to read of how this might be possible through the spontaneous development that happens in Kundalini yoga. For example, in his autobiography "Kindalini"(?), the Pandit Gopi Krishna experienced a painful degree of intense heat which he tried to cool by pouring water over himself. East Indian scriptures say this happens when too much energy goes through one side (I forget which but either the Ida or Pingala subtle nerves - the"sun" or the "moon"). Could this phenomenon of spontaneous combustion be explained by the development of this "Kundalini" energy? To me it sounds plausible and worth considering.

we really have no way of explaining what is causing this to happen. Ignition is important obviously as is a high temperature.

Yet there is no evidence that it has ever happened accidentally or independently with a dog.

I pointed out that looking at the hydrogen may be a better starting point because binding hydrogen could free oxygen to fuel a high temperature burn. however we we are all left stretching and guessing.

It is of course impossible to test esoteric sources.