Here are two reports from two highly trained Naval professionals on UFOs far out to sea were the possibility of land based phenomena is zero.  Both reports are effectively unimpeachable.  This also makes them special and rare when compared to similar reports.

We learn two important facts that were in fact outright confirmed on these ships.  The first is that the craft produce strong gamma radiation and that when powering up to leave, the induced glow also strengthens.  The second is that an observer was able to put a laser range finder on the second craft and establish that it was a mere 200 meters away and that the size of the craft was one half of a mile across.

It then skedaddled at a likely acceleration approaching one g which fits in nicely with the fifteen second time frame observed although it was raining and that could make the acceleration quite a bit slower.  Maybe they did not wish to fry the ship.

Please observe that both witnesses would survive a protracted cross examination and be supported by equally effective witnesses.  These men were never alone and had witnesses to hand.  We have dozens if not hundreds of comparable observations but usually or even always lack the inherent capacity to corroborate with hardware and comparable witnesses.  These are the exceptions.

I reported one comparable in the from a personal friend who saw such a craft enter the sea.

It is becoming progressively clear that substantial UFO traffic exists between underground Earth habitats and Space that is generally well cloaked.  However, in the right conditions, that fails.  One such condition is simply been close enough.

UFO Seen From US Navy Ship

While in the Navy in the summer of 1986, I was standing lookout aboard the USS Edenton ATS 1 (currently decommissioned).

The lookout watch, stood outside on top the bridge of the ship, and was responsible for reporting all contacts seen both in the water and sky. It was around eleven p.m. one clear night at sea, located about fifty miles off the coast of Cape Hatteras, NC.


During one of my scans of the night sky, out of nowhere, four red circular lights appeared. The lights where hundreds of yards apart from each other and formed a square. At first, I thought it was four separate air craft, such as, military helicopters because the lights were stationary; however, due to the distance from the ship, the lights where too large to be aircraft running lights.  [please note that he is trained to get this right]


There were also no other normal running lights like green and white, which make-up the normal outline of an aircraft seen at night. The lights where located about twenty degrees above the horizon and about a mile away from the ship. Again, these four red lights were each about the size of a small plane, which were very bright and visible in the night sky. The night sky was also clear, moon lit, and a moderate amount of stars were visible, which also aided in calculating the distance and size of these lights.


As stated, when I first saw these lights they were all stationary in the sky and appeared out of nowhere. Once I noticed that these were not normal lights, grouped in a square and not moving, I called down to the bridge over a salt and pepper line informing the conning officer of a possible UFO sighting. This brought laughter across the wire at first, but I relayed the contact again in a stern but excited voice, which succeeded in getting the bridge officer’s attention. After relaying the contact information a second time, the four lights, in a flash, darted towards the horizon amazingly fast. The lower two lights in the square went first, with the top two lights following directly behind them in a curved swooshing motion and there was no sound.


Then all four shot straight up into outer-space and out of sight, all within a split second. At this point, I felt very excited and shocked, and was personally praying someone on the bridge had seen what I just saw. Having been an avid watcher of the night sky, seen shooting stars and a believer in that life has to exist somewhere out there, I become even more excited because I knew, I just saw my first unidentified flying object(s).


To my amazement, when I returned to the bridge after my watch, I was very pleased to learn that the conning officer and everyone else on the bridge had seen this sighting and logged it into the ship’s log as a UFO sighting.


Next, after a half hour had passed since the sighting, the radiation detection system (gamma roentgen meter) on the bridge started making a loud clicking sound. At first, no one seemed to know what was making this sound then a very loud bell went off notifying us as to what was going on, we were being radiated.


When the instrument stopped clicking, it indicated we had taken a hit of 385 roentgens in the period of about one minute. At thispoint, the captain of the ship was awoken and called to the bridge, as well as the chief in charge of the radiation metering equipment onboard ship.[No kidding!!]

The captain was not impressed with an entry of a UFO sighting being placed in the ship’s log, and at first, took the roentgen meter as being defective. However, the chief informed the captain that the meter had been serviced and calibrated the day before and that other like meters throughout the ship had just gone off indicating the same amount of roentgens received as the bridge.


The captain stated not to log the instance concerning the radiation exposure and left the bridge. During the rest of my watch duty that night, no officer or enlisted person spoke of what happened, and also acted liked nothing happened. This experience, however, was etched into my memory as if it happened yesterday and I have told this story to only a few people, people who I thought would believe me. This is also the first time I have documented the events of this night.


In conclusion, as an indication of the strength of gamma radiation, I and others received that night; all the personnel during the Project Trinity experiments conducted in 1945 at ground zero, only received between 1 and 6 total roentgens of gamma radiation. This leads me to believe, we traveled through the wake of radiation produced by the UFOs seen thirty minutes earlier. - MUFON CMS 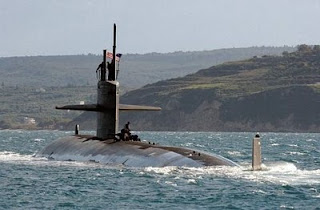 A sailor reports about the UFO sighting he had while in the Navy. "I was assigned to USS Memphis (SSN-698), Homeport - , FL. (.) Our mission was Special Assignments which meant we protected the Space Program. We would go to sea and patrol while the shuttle was on the pad. Nine years ago, on October 24 and 25, my ship was on patrol about 150 miles of the coast. We were cruising at about 500 feet when the submarine started experiencing electronics problems. The ship was malfunctioning, our tanks were blowing out of control, we were losing navigation ability and the communications area was totally lost. We went to all stop and tried to access what was happening. The controls in the reactor area started to malfunction. This presented a serious danger to our safety, so the captain ordered us to shut down the reactor, surface and go to diesel motors. When the ship surfaced I went to my watch station. The ship was still experiencing electronic difficulties but the mechanical devices such as diesel engines, cook stoves, and turbines were fine. It was raining and the entire sky was red like a red neon sign. I saw a large inverted V-shaped UFO off the port side. The executive officer told me to stand fast and he would speak to the captain. In a minute, the captain appeared on the tower and asked me for a distance to the craft. The laser range finder determined the closest point was 200 meters and the farthest point was 1,000 meters off the port. The UFO was not perpendicular to our ship but at about a 45' angle. This huge vessel was over a half mile across. The UFO made a half circle around our ship then passed across the stern causing our electronics systems to go crazy. We had permanent damage in communications and the sonar room. As the craft flew over the stern, I could see the rain stop under its red glow. The water seemed to rise almost a foot as the UFO passed over silently. When the UFO finished its swing across the stern it paused - the sky got brighter red and it simply moved off at tremendous speed inside 15 seconds. When the UFO left our boat returned to normal with the exception of the radio and sonar. We did a quick system check and the captain ordered us to return to reactor power and get underway.


The captain took two petty officers, the executive officer, and myself into the wardroom. He told us to not spread any rumors until we had a chance to talk to Commander Submarine Fleet - . We reached port in about 7 hours where I was taken into "protective custody." Two enlisted men and myself agreed we had witnessed a real UFO. I was the one who shot it with a laser range finder so I was the only one that had its exact sizes. I shot that vessel as it hovered and I got solid readings not spotty like I would on debris. We were in holding for about three hours when an officer from the Air Force arrived and gave us a line of bull about an exploding weather satellite. The Navy then transferred virtually everyone on the crew to new assignments. This included the her captain, the executive officer and the entire crew. They were split up which almost never happens unless one of them gets a promotion or a new command, neither of which happened. The military just split up a 4 year team. I was watching a program tonight that gave me the courage to share it. - MUFON CMS -Strange Secrets: Real Government Files on the Unknown

Does anybody fact check this. A quick search turns up the information that 450 roentgens is lethal for 1/2 of those exposed. So we are looking at 385 roentgens, which is about 85% of the dose necessary to kill 1/2 of those exposed. One would think that if this officers tale was accurate that some of those on the ship would have had some rather dramatic symptoms of radiation sickness.

Ooooooo... Maybe it was special alien radiation that does not make humans sick. Or maybe they sprayed the ship with a wellness ray. Ooooooooo...

Or maybe the man just has a bad memory or lies a lot.