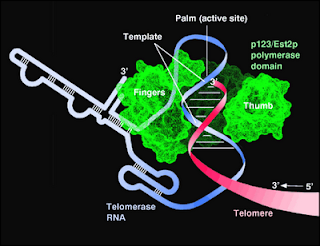 Here are a couple of snippets on the development of telomere based protocols. My sense on it all is that while many folks are presently jumping the gun, and if you can then why not? the underlying science is early days and it all may bite us.  These two items makes it pretty clear the effects are difficult to monitor and measure and one size may not fit all.

Yet when a healthy individual experiences a general increase in overall health and performance and he is an extreme athlete quite able to observe fine variances at the same time, one is inclined to jump on the bandwagon.

It appears that while direct therapies will cost thousands for some time yet, selective nutraceuticals are been sought and packaged to reach the mass markets rather soon.

I suspect we will have a straight forward treatment protocol inside of five years that will do its job over a few months to be repeated every five years or so.  Its effect will be to slow aging as we know it but it remains to be seen if it will actually carry one much beyond the normal lifespan.

It has always been a reasonable objective for the human being to live a full life in its prime until it reaches its complete life span.  Most wild animals achieve that much at which point they abruptly deteriorate and expire.

Our own natural span is one hundred years at least.  After that we are truly in new territory about which we have scant data.

Presentation from the SENS5 conference

Telomere shortening is thought to play a role in cellular aging contributing to human aging and longevity. Critical telomere shortening affects different genes, as the human genome varies, which is why the cascades differ, hence the different effects and organ failures. For years telomere length maintenance has been targeted. However there was no one treatment to keep the length within the normal limits. Variations of telomere shortening occur within same type of tissue, as well as different tissue types, from same and different individuals. Also very little is known about ratios comparing old cells with short telomeres to new cells with normal telomeres, among same and different tissues and individuals. Many telomere shortening factors have been considered, including the t-loop deletion factor and 5'-(TTAGGG)n-3' oligos, in order to find treatment that works.

However it still takes trial and error to adapt the dose levels and administrating the treatment frequencies, according to the individual genes and their interaction with the environment. Additional difficulties arose when the treatment was to be cheap, as well as testing it.

Treating human skin cells with 5'-(TTAGGG)1-50-3' oligos overcomes senescence and the t-loop deletion factor. The difficult part is the dose and administration frequencies.

Overall as expected the longer the oligomer, the lower the administration frequencies.

Doses are according to transfection efficiencies, in this experiment of DEAE-Dextran. Additional immortality control is required to take cells into a new culture and stop their treatment to see if they will immortalise, which will indicate too higher dose and/or too frequent. The opposite will be if the cells live as long as the non treated cells control, which would indicate lower dose and/or lower frequency of treatments. Cheap, easy, effective and sufficient test was simply cell counting. Different cell dyes were also tested.

Culturing is efficient with both CO2 incubator and/or electric blanket. However the electric blanket after you manage to maintain the correct temperature in the dish requires also pH regulation every 3 hours. Cell counting is easier with TESCO-food-colours. Every little helps. Every microscope with eyepiece x10 and objective x20 is sufficient, OPAX-1108 was used in this experiment. Photos were obtained with 3.2MP mobile-phone-cam. Future experiments will gather more cell-lines data, target tissues, whole organs and eventually extending whole human life spans. Prediction is that telomere length maintenance is tissue independent, but ratios of old cells with short telomeres to new cells with normal telomeres remains tissue dependent. This would suggest that even tissue such as blood cannot be used as parameter predictions for relative telomere length in other tissues.

I would like to introduce you to something I came recently in knowledge of that intrigued me immensely and made me feel morally obligated to share with you. Many may know that I’m very passionate about environment and health. All my life I have been searching for answers and more understandings in these subjects.

How the body works and the process of aging is among this exploration, how environment and pollution does have an effect on all this and how you can live a better life despite all of this. Environment is only one piece of the puzzle.

Recently I have attended a lecture with Dr. Bill Andrews, PhD and cell biologist, who has been on a quest to find answers on the aging process all his life. He has been researching how the process of aging occurs and how you can slow this process down or even reverse it. So far Dr Bill has been featured on the front page of the popular science magazine Elle and others as well as given live lectures and interviews on many news channels and universities around the globe.

This is an interview with Dr. Andrews from 2009 on BBC TV on “Don’t grow old”

He is recognized among many other scientists and doctors in the field, such as the very know Dr. Mercola:

Dr. Bill Andrews presented how our  DNA, the key element of our cells contain at the end of the string something called TELOMERES. The aging process is actually caused by the shortening of these telomeres every time the cells replicate themselves which is happening all the time. Every 7 years we have a brand new body with 100 trillion new cells. When we are born, we have around 10.000 units of these telomeres and when we get to around 5.000 units, the body starts to grow old and die. In his 40 years of studying the subject, he has found that one particular gene called TELOMERASE, is responsible for this shortening as it is deactivated. This gene is not deactivated in our reproduction cells. This explains why our children are born with the full 10.000 telomeres and are full of vitality.

Dr. Andrews reached a breakthrough where he found nutrients that stimulate the activation of the telomerase gene that causes the slowing down of the shortening of the telomeres. After having tested over 300.000 different chemicals and drugs and finding only few that stimulated activation of TELOMERASE he was divinely put in touch with master formulator John Anderson who asked him why he was not searching for botanicals or natural substances and test them. Bill was skeptical and thought that if there were any botanicals out there that someone would already have discovered them. However, thanks to his open mind and driving desire to cure aging he was and is willing to try and test anything. To his surprise out of the first 30 botanicals John gave him to test he had found strong "hits", meaning activation of telomerase. Thrilled about this he realized he was dealing with a truly most knowledgeable man who knows more than anyone about the botanicals on our planet. Together they now form a very dynamic duo and are supported by many other scientists forming a master mind.

With their combined forces they have been able to formulate a product that supports the health of telomeres and is available only through one channel of distribution, John Anderson’s company Isagenix. Clinical studies are on the way and will certainly be published soon.

Several thousand people including the scientists himself are now using these nutrients and they have all experienced an increase in health and other benefits such as more energy, endurance, better memory, better mental clarity, better eyesight and healthier skin and hair. The scientist, who is at the same time a runner  who runs ultra marathons several times a month recently ran a 100 mile race where he  finished 7th. All people in the top 10 were below the age of 40 with him being 60.

All of this convinced me to try it out and share this knowledge with you as I think it is a very important breakthrough.

Of course this product is only one piece of a larger picture to slow and reverse the aging process and in my research, I as well as Dr Bill found that aside from the environmental issues, most of the aging factors are being address by this company I spoke about earlier.

Their nutrition and cleansing systems combined with their ageless essential vitamins with Telomere Product B is the most powerful and effective action plan on the planet for anyone that wants to stay young and live a healthy and long live. After all living long is great but if you are not in great health and suffering from disease and pain, what is it worth.

Also note, memon® in combination with healthy nutrition is a most wonderful combination as EMF will cause oxidative stress to the cells leading to the closing down of the cell membrane. When memon® is installed, the cell membrane is not disturbed, it allows the free flow of oxygen/nutrition to the cell, the detoxing of pollutions from the cell and the cell energy is not affected.


You find a nice link to a short presentation of Dr. Andrews on ‘telomeres and aging’ and so much more.

I received all of this information through Mitja, a friend of mine that I trust very much. He studied naturopathic medicine in . He is also a worldwide inspirational speaker and he chose Isagenix as his vehicle to help others transform their life physically, financially and personally. He offered to help answer any questions or help people to get started on their journey to better health as a free service. Together we are now sharing this info with our communities and you are some of the first to hear about this.