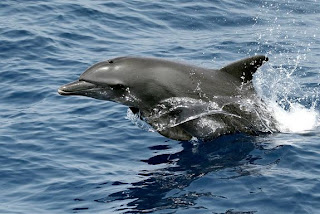 What this item means is that dolphins can actually speak to each other at any depth and probably do even though the sound made is whistle like to our ears.

It becomes plausible that we can design a sound conversion algorithm that will take the whistles and change them into something our own ears can accept and possibly repeat with our own rich voice.

The mere fact that the capacity survived in the transition to the sea supports a robust interpretation.

It is time we figured out how to directly communicate with the dolphins without exhausting their patience.  In the end we will be able to speak into a microphone and carry on a conversation.

Dolphins "talk" to each other, using the same process to make their high-pitched sounds as humans, according to a new analysis of results from a 1970s experiment.

The findings mean dolphins don't actually whistle as has been long thought, but instead rely on vibrations of tissues in their nasal cavities that are analogous to our vocal cords.

Scientists are only now figuring this out, "because it certainly sounds like a whistle," said study researcher Peter Madsen of the Institute of Bioscience at in , adding that the term was coined in a paper published in 1949 in the journal Science. "And it has stuck since."

The finding clears up a question that has long puzzled scientists: How can dolphins make their signature identifying whistles at the water's surface and during deep dives where compression causes sound waves to travel

faster and would thus change the frequency of those calls.

To answer that question, Madsen and his colleagues analyzed recently digitized recordings of a 12-year-old male bottlenose dolphin (Tursiops truncatus) from 1977. At the time, the researchers had the dolphin breathe a mixture of helium and oxygen called heliox. (Used by humans, heliox makes one sound like Donald Duck.)

The heliox was meant to mimic conditions during a deep dive since it causes a shift up in frequency. When breathing air or heliox, the male dolphin, however, continued to make the same whistles, with the same frequency.

Rather than vocal cords, the dolphins likely use tissue vibrations in their nasal cavities to produce their "whistles," which aren't true whistles after all. The researchers suggest structures in the nasal cavity, called phonic lips, are responsible for the sound.

The dolphins aren't actually talking, though.

"It does not mean that they talk like humans, only that they communicate with sound made in the same way," Madsen told LiveScience.

"Cetean ancestors lived on land some 40 million years ago and made sounds with vocal folds in their larynx," Madsen said, referring to the group of mammals to which dolphins belong. "They lost that during the adaptations to a fully aquatic lifestyle, but evolved sound production in the nose that functions like that of vocal folds."

"Because the frequency is changed by changing the airflow and the tension of the connective tissue lips in the nose, the dolphin can change frequency much faster than if it had to do it by changing air sac volumes," Madsen said. "That means that there is a much bigger potential for making a broader range of sounds and hence increase information transfer."

The research is detailed this week in the journal Biology Letters.