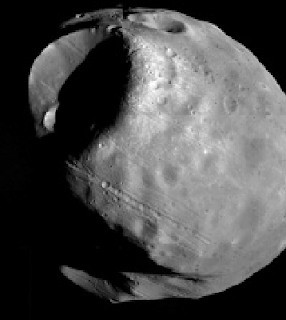 This is a remarkable revelation made first in 1958 that has not been pushed that much in recent years.  I do not understand why this is true.  The density implied is far too low and a hollow shell is the best explanation.  In the meantime this problem like manuy is simply been ignored.

I also note that the size is sufficient for a space habitat.  The outer shell of rock would provide a natural protection against the space environment itself.  The space habitat itself would form a spinning globe perhaps a full couple of miles in diameter that can be accessed through the so called impact crater.  The spinning of the globe provides the necessary artificial acceleration.  The outer shell would be bonded and formed by some not yet understood technique able to do so.  It does not spin because it is not strong enough to do so and its purpose is simple protection.

Yet it must stand up to occasional acceleration to offset the orbital deterioration if these reports are in fact correct.  Yet this orbit is able to stand up for millions of years before it becomes a problem for habitants and replacement is also a viable option then.

So the question is why do we avoid debate on this subject?  The out of place monolith alone deserves a visit.  Besides this is in a good position to establish a working base for the exploration of Mars.

I find the use of a protective shell noteworthy because this same piece of datum came from another source that was unrelated to the scientific world but bore other creditable data on space habitats.  We do not know today if this is necessary in order to live in space but it is implied from this example.

Recall that I have predicted the existence of such habitats as a human generated artifact produced in order to evacuate Earth 15,000 years ago in order to trigger the Pleistocene crustal shift. 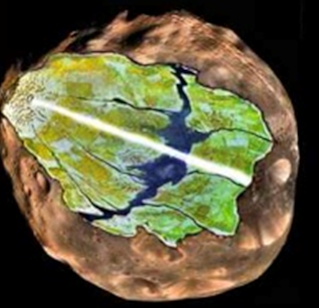 Dirk Vander Ploeg writes, " Astrophysicist Dr. Iosif Samuilovich Shklovsky calculated the orbital motion of Martian satellite Phobos and came to the jaw-dropping conclusion that the moon is artificial, hollow, and basically a titanic spaceship. [1958 my insert!]

The scientist is world-renown for penning the classic science book, "Intelligent Life in the Universe with famous  professor, the late Carl Sagan of PBS and Voyager space probe fame.

Mars' two moons, Phobos and Deimos, translate into "fear and "horror, as Mars is named after the god of war. Both satellites were discovered in 1877 by astronomer Asaph Hall.

Both moons are extremely odd, especially the tumbling moon of fear: Phobos. Two facts deeply troubled Shklovsky. First, both moons are too small. No other planet in the solar system has moons as tiny as the Martian moons. Second, their origin bothered him. Were they captured asteroids as others assumed? No, they could not be! Their orbital plane was all wrong. And they're much too close to Mars. Even more amazing"Phobos changes its speed from time to time.

After lengthy study of the tidal, gravitic, and magnetic forces, Shklovsky came to the inescapable conclusion that no natural causes could account for the origins of the two odd moons or their bizarre behavior, particularly that exhibited by Phobos.

The orbit of that fantastic moon was so peculiar, so bizarre, that Phobos had to be a gigantic spaceship. Every other possible cause was carefully considered and resignedly rejected. Either alternate explanations had no supporting proof or the math was wildly off.

Phobos had to be accelerating as it lost altitude, yet could the outer fringes of the thin Martian atmosphere cause a braking action? During an interview about the peculiarities surrounding Phobos, Shklovsky said, "In order to make this braking action so significant, and taking into account the extremely rarefied Martian atmosphere at this altitude, Phobos should have very small mass, that is, very low average density, approximately one thousand times smaller than the density of water.

A density that low, less than an Earth cloud, would have dispersed Phobos eons ago. That could not be the solution. "But can a continuous solid have such low density, probably smaller than that of air? Of course not! There's only one way in which the requirements of coherence, constancy of shape of Phobos, and it's extremely small average density can be reconciled. We must assume that Phobos is a hollow, empty body, resembling an empty tin can.
Like a spaceship is a tin can in the cosmos. For all intents and purposes, the Apollo Lunar Excursion Module was a tin can exceedingly smaller than Phobos, of course."Well, can a natural celestial body be hollow? Never! Therefore, Phobos must have an artificial origin and be an artificial Martian satellite. The peculiar properties of Deimos, though less pronounced than those of Phobos, also point toward an artificial origin.

Are alien spaceships the size of small moons orbiting Mars? That makes the so-called "Face on Mars look ridiculously feeble by comparison! Yet, no less than the Naval Observatory stated: "Dr. Shklovsky quite correctly calculated that if the acceleration of Phobos is true, the Martian moon must be hollow, since it cannot have the weight of a natural body and behave in the prescribed manner.

Thus, even that august American institution conceded that mysterious alien ships might be orbiting Mars 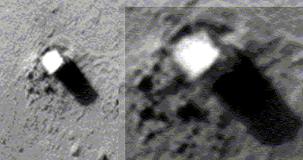 Strange monolith on surface of Phobos

Apollo 11 astronaut Buzz Aldrin revealed during an interview on CSPAN's Washington Journal, "We should go boldly where man has not gone before. Fly by the comets, visit asteroids, visit the moon of Mars. There's a monolith there. A very unusual structure on this potato shaped object that goes around Mars once in seven hours. When people find out about that they're going to say who put that there?' The universe put it there. If you choose, God put it there Speculations over what the giant artificial spaceships might be have ranged from massive Martian space observatories, to half-completed generational interstellar spaceships. NASA/JPL image. Thanks to http://www.ufocasebook.com/

watch alex colliers videos, the original 2000 hydrogen-breathing greys in habit these moons. they breathe hydrogen so no water would be present also telling why Phobos is so lite bieng filled with hydrogen and all. the moon is also the same-hollow made by orion humans towed here by a "comet" really a space ship and put into battle with the war going on at the time the moon was brought. now it sits orbiting earth soon it may be towed to jupiters orbitbecause of conflicts with bad ETs. so if it is desrtoyed shrapnel doesnt destroy earth, the whole reason for the conflict.