Facing Reality in the Middle East 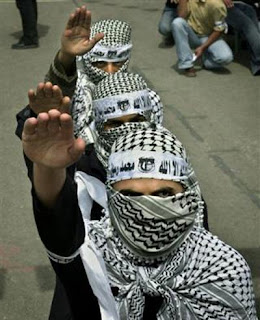 I doubt if it is ever time to face reality in the .  Too many interests have been and continue to be served by the sustaining of a perpetual state of war on behalf of the Palestinian people.  Note that this has little to do with those people only so far as they can be continuously persuaded to actually support that state of war.

The dissolution of and has thrown the Arab front in this war into disarray and it is presently impossible to predict the future shape of things to come.  There exists both a palette of both serious threats and opportunities.  My own prognosis is possibly too optimistic and it certainly can be hijacked by another self made dictator although the emergence of a rioting population as a political player makes that a lot less likely.

In it is certain that a new constitution will be needed as well as an election to sort out the government.  NATO assistance is already on the ground and the expertise to create a new government.  The previous regime never favored an institution able to now influence things and oil revenues will pay for it all.

The Egyptians get to do it all by themselves under the guiding authority of the army, however that works out.  Yet the army leadership is not likely to want to launch a war anytime soon.  The peace treaty worked out for them and lets them have privilege without cost.  After the political system sorts itself out and trusted folks are in charge, we can expect the Sinai situation to be restabilized.  The military is not politicized and its loyalties have now suffered a disconnect.  A new elected government will need to prove itself to the military and the population both by promoting a growing economy.  Success there or even failure will capture their energies and naturally lower the risk of any military adventurism however shrill the hate mongers.

So though scary scenarios can certainly be written, the risk of war on the Sinai front may have actually diminished and may well be on the way to been no risk at all.  In time a democratic can become an economic ally of an that permanently guards ’s front door.  It is forgotten in the noise that this is their mutual interest.

Then we have .  The majority is trying to rid themselves of the Assad regime.  I do not think that they can do it on their own.  They will hugely weaken the regime though and in the process weaken Hamas and Hezbollah.  This civil conflict diverts Iranian cash to shoring up Assad from their proxies.  The question now is just how long the unrest will be maintained?  Recall that riots in the have already been abandoned in the face on Saudi action.

I do not expect any radical moves until the above is settled.  As I have posted in the past, the end game for this conflict will be to engineer the removal of all Palestinians from Southern Lebanon, and the West Bank to in which they are accepted immediately as full citizens.  Intransigence on the part of the Palestinians plays into this scenario and radical Israelis know how to push it through by simply applying pressure year after year on the land front. A successful revolt in against the present regime would open that door immediately.

What I have just said is that the pressure is already applied and the long term Israeli calculation is that sooner or later the Eastern door will open for the Palestinians.

Time to Face Reality in the

The idea that conflicts between peoples can be resolved by diplomatic negotiation has frequently been a dangerous delusion. Duplicitous states bargain in bad faith, using the process to buy time and mask their aggression. States unwilling or unable to use force will make diplomacy an excuse to substitute words for deeds. Too often, as historian Robert Conquest wrote about Cold War diplomacy with the Soviet Union, “since diplomats’ forte is negotiation, they believe negotiation to be good in itself . . . But the Soviets did what their interests required when the alternative seemed less acceptable, and negotiation was merely a technical adjunct.”

The 60-year-long conflict between and the Palestinian Arabs is the textbook example of the dangers of insincere diplomatic negotiation. The latest phase of that struggle is the threat of the Palestinians to ask the U.N. Assembly to change their status from non-voting observer “entity” to non-voting observer state. “The change,” The New York Times writes, “would pave the way for the Palestinians to join dozens of United Nations bodies and conventions, and it could strengthen their ability to pursue cases against at the International Criminal Court.” The has threatened to veto such a move if it comes before the Security Council, which unlike the Assembly can grant full U.N. membership as a state. Thus the U.S. is furiously lobbying other states in order to head off a move that could, according to the director of the American Task Force on Palestine, “inflame emotions [in the Middle East] and bring anti-American sentiments to the forefront across the region” already roiling with revolution. A veto, former ambassador to Martin S. Indyk agrees, “will provoke a Palestinian awakening” and incite “new violence” for which “we will be blamed.”

One has to wonder what world these diplomats live in. They seem to think that the conflict is one merely of achieving Palestinian statehood, and that negotiating to that end will resolve the dispute and bring peace to the region. They’re worried about the Palestinian move in the U.N. because it will end negotiations with Israel, negotiations that have been fruitless for decades, and that have done nothing to stem the terrorist violence perpetrated by Palestinians who want to destroy Israel, as the charter of Hamas makes explicit. Nor has the allegedly “moderate” Palestinian Authority negotiated in good faith over the years, turning down numerous opportunities to achieve a state because of an “all or nothing” attitude. Moreover, agreements that have been negotiated have merely encouraged the P.A. to demand more and more concessions from .

Barry Rubin outlines this dismal history of the wages of bad-faith negotiation: “Since 1993, the Palestinian Authority has made several agreements with . In exchange for being handed control over the Gaza Strip and much of the West Bank; billions of dollars in aid; the supply of weapons; the return of tens of thousands of Palestinians to these territories; and many other benefits, the PA promised to do various things in return.
These include an end to incitement to kill Israelis; stopping terrorism; and negotiating in good faith for a comprehensive agreement.” Yet the P.A. has not fulfilled any of these promises for which it received such concessions. Indeed, as Rubin continues, “Since Hamas attacked with rockets and mortars setting off a war in December 2008, the PA has refused to negotiate with . When President Barack Obama in September 2009, announced he wanted to hold direct talks in , the PA refused. In 2010, when , at the request of President Barack Obama, froze all construction on settlements for nine months, the PA again wouldn’t talk.” Clearly, negotiation is a tactic to be used depending on circumstances, and the P.A. believes at this moment that the U.N. is a better avenue for achieving its aims than is engaging in talks with .

As for that famous “peace treaty” with Egypt often touted as proof of the possibilities of a negotiated settlement, the fall of Mubarak is making it increasingly clear that it was merely a 30-year cold truce purchased with the Sinai’s oil fields and the $2 billion a year in U.S. aid. Now with Mubarak gone, the border with is open to weapons, and the Sinai is a launching pad for terrorist attacks like the one a few weeks ago that killed eight Israelis.

The historical experience of negotiation to end the Israeli-Arab conflict is clear: concessions negotiated by Israel are met with violence and intransigence, just as the Oslo Agreement of 1993, which handed over control of the West Bank to the Palestinian Authority, was followed the rest of the decade by attacks that killed 256 Israeli citizens and soldiers. For those with eyes to see beyond the false promise of a negotiated “two-state” settlement, the explanation is obvious. The goal of most Palestinians is not two states living side-by-side in peace; rather, the goal is the same as it was in 1947, when the Palestinian state created by U.N. resolution 181 was rejected and followed by war––the destruction of Israel. The failure of that war and subsequent ones to achieve that aim did not disabuse the Arabs of their ultimate goal, but merely forced a change of tactics, one of which is the use of diplomatic negotiation as a “technical adjunct” to their long-term goal of wiping off the map.

Instead of trying to head off the U.N. vote or calling yet again for futile “peace talks,” the needs to cast off the delusions of a negotiated two-state solution, and act on the basis of reality. We could start by making it clear to the Palestinians that further intransigence will result in the cut-off of U.S. aid, which (including contributions to the U.N.’s Relief and Works Agency for Palestine) has averaged $800 million a year. As for the threats of violence and increased anti-Americanism, these are constants in the region that nothing we do will change. For all of President Obama’s efforts at outreach to the Muslim world and pressure on Israel to make even more unreciprocated concessions, public opinion there is as negative towards the United States as it was under President Bush. A veto in the U.N. will just be another pretext for indulging the same old tactic of employing violence and then blaming .

“It is easy enough,” Conquest wrote, “to fall into the trap of thinking that others think, within reason, like ourselves. But this trap is precisely the error that must be avoided in foreign affairs.” The dismal history of the gives us ample evidence that we have fallen into that trap for decades, compromising our own national interests and putting at risk the security of a valuable ally. It’s long past time that we made policy based on reality instead of on our own delusions.
Posted by arclein at 12:21 AM