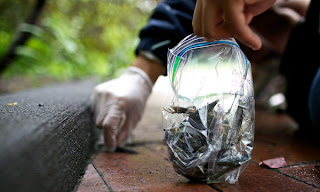 This is one of those problems for which no easy solution suggests itself.  At best we must accept some reduced level of loss or give up reflective glass sheets as a design element.  Perhaps that option will turn out to be the simplest and certainly the cheapest.

Recall also that people do walk into glass also and injure themselves.  It is no trick to apply designs that eliminate the risk. Perhaps a city competition for such design work is what is called for.  Let us employ art work to solve this problem.

The losses are unfortunate but they are also still modest in terms of actual populations.  There are plenty of other reasons birds largely avoid cities.  It is all about the trees.  The city of has a massive bird population simply because the city has an aggressive tree planting program.  Yet they are only lightly in evidence around the large buildings.

Yet it still needs to be addressed. We know how we are going to build so we may as well make sure that we cause little unwarranted bird losses.

A City of , and a Hazard for Migratory Birds

Ms. Laurel is a volunteer for New York City Audubon, and during the weeks of the fall migration, she is part of a dawn patrol that scans the sidewalks and plazas of Manhattan, searching for victims of the city’s forest of glass towers. The other morning she spied the bodies of six that had collided with the plate-glass ferry terminal at the .

“We live in an age of glass,” said Ms. Laurel, an architect. “It can be a perfect mirror in certain lights, and the larger the glass, the more dangerous it is.”

New York is a major stopover for migratory birds on the Atlantic flyway, and an estimated 90,000 birds are killed by flying into buildings in each year, the Audubon group says. Often, they strike the lower levels of glass facades after foraging for food in nearby parks. Some ornithologists and conservationists say such crashes are the second-leading cause of death for migrating birds, after habitat loss, with estimates of the national toll ranging up to a billion a year.

As glass office and condominium towers have proliferated in the last decade, so, too, have calls to make them less deadly to birds. The Planning Commission adopted bird-safety standards for new buildings in July, and this month that city’s Board of Supervisors will vote on making it law. Legislation is pending in that would require many federal buildings to incorporate bird-friendly designs.

The United States Green Building Council, a nonprofit industry group that encourages the creation of environmentally conscious buildings, will introduce a bird-safety credit this fall as part of its environmental certification process, called LEED.

There are no easy fixes, however. A few manufacturers are exploring glass designs that use ultraviolet signals visible only to birds, but they are still in their infancy. Opaque or translucent films, decals, dot patterns, shades, mesh screens — even nets — are the main options available. And they have been a tough sell in the high-design world.

New York City Audubon, the American Bird Conservancy and other groups are actively pressing for their use. “I hope there will come a time when putting up an all-glass building is like wearing a fur coat,” said Glenn Phillips, executive director of Audubon. “Not that no one will do it, but maybe they’ll think twice about it.”

A group of Audubon volunteers are gathering evidence of bird collisions this fall at a dozen buildings, including some of the city’s most prominent structures, like the of Art, the and the . Most sites were chosen because they feature glass walls next to parkland or vegetation.

Since 1997, when the collision-monitoring program began, Audubon has collected nearly 6,000 dead birds, carefully bagging and documenting them. The group has used the findings to ask for modifications to buildings that prove to be the worst offenders.

Often, only one section of a building is the culprit. “You don’t necessarily have to treat every window,” Mr. Phillips said. “It would be prohibitive to do the whole building.”

Several years ago, volunteers witnessed a slow-motion slaughter at the Morgan mail processing center in , where more than 300 dead birds were discovered in 2006 alone. (A row of plane trees, reflected in the mirror-like, south-facing facade, was luring the birds to their death.)

The building’s manager agreed to place an opaque cover over the windows; the next year, Audubon scouts found no casualties. Other buildings, like 26 Federal Plaza and even the World Trade Center, when the towers still stood, erected nets on lower floors to prevent bird crashes.

The Jacob K. Javits Convention Center, which has been undergoing renovation, is the most recent building to voluntarily correct the problem of bird collisions. After pleas from Audubon, the architects, FXFowle, designed retrofitting that included less reflective glass and a dot pattern.

Some new all-glass buildings are designed so that birds can easily detect them. Conservationists point to Frank Gehry’s IAC headquarters in as an example. Horizontal, dotted white bands control the flow of light, while the curvilinear — almost billowing — facade prevents a mirror effect.

When birds do fly into an angled wall, the result is usually a glancing blow rather than a head-on collision, conservationists theorize. That may be one reason why volunteers who survey the have found few victims outside the Sackler Wing, with its slanted glass exterior.

But volunteers have found 20 to 120 dead birds a year near the museum’s vertical expanse of glass facing west into . Audubon has suggested nets or a glass prototype that uses ultraviolet signals, but museum officials have thus far demurred.

“Frankly, the museum has not yet discovered a workable solution for those parts of the building where this has been a problem,” Harold Holzer, the senior vice president for external affairs, said in a statement. “We will continue to monitor developments in technologies.”

About 90 buildings now participate in Lights Out New York, Audubon’s initiative to get buildings to turn off lights after midnight during the spring and fall migrations. Bright lights attract and confuse birds. Cities like , and also have successful lights-out campaigns.

Exterior lighting is one of many elements in the Green Building Council’s new bird-collision deterrence credit. “I don’t know of any architects out there who want to kill birds,” said Brendan Owens, a council vice president. “To the extent that the LEED credit raises awareness, I think we’ll see more architects sensitive to these issues, which will lead to more companies developing solutions.”