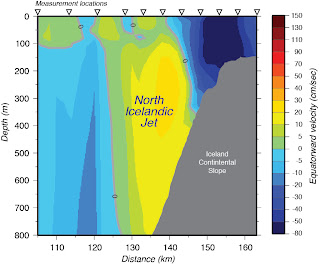 This revelation tightens our understanding of the counter flow that emerges from the , that was thought more vulnerable to surface heating.  It appears that it is not.

We know that shifts in volume or even position if possible could possibly change the heat content of the surface waters of the .  We even know that this happened during the Bronze Age for a sustained period.

The real question is how that this may be so.  The truth of it is that we need to do much more in this type of data gathering to even have a competent empirical model to experiment with properly.

Present evidence suggests that the heat input into the notched upwards perhaps three decades ago.  This has positively increased the global atmospheric heat content to provide a more uniform warm climate and increasing the CO2 content possibly at the same time.

What nags me is our lack of understanding of the significantly warmer Bronze Age.  It is plausible that this resulted from a well covered as that is the one think that changed significanly. 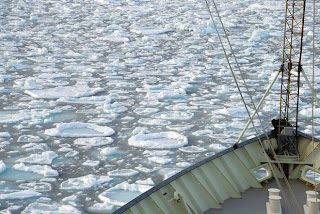 May impact response to climate change

The new current, the North Icelandic Jet, feeds the Atlantic Meridional Overturning Circulation, a giant pattern known as the "great ocean conveyor belt," or by the disconcerting acronym AMOC.

Because this pattern is critically important for regulating Earth's climate, including European and North American climates, any strong influences on it, and their response to a warming Earth, are of keen scientific and practical interest.

The "conveyor belt" current, introduced to movie-goers in the Al Gore environmental film "An Inconvenient Truth," carries warm surface water from the tropical Atlantic toward the . In the process, the water warms the air in high latitudes, then cools, sinks and returns toward the equator, flowing as a deep stream at lower ocean depths.

Climate specialists reckoned that most of the cold water that made up that deep south-flowing stream came from off the Greenland coast and was made up of fresh glacier-melt water, produced by new warmth in glacier-covered .

Because fresh water freezes at a higher temperature than salt water, these specialists suggested that this fresh water from glaciers and other warming-related phenomena would get into the , where it could freeze and prevent the water from sinking to make up the bottom of the conveyor belt.

If that happened, and the AMOC was disrupted or slowed at the place in the far north where the warm water at the surface cools and sinks -- called the overturning -- it could eventually lead to a colder Northern Hemisphere.

However, the newly confirmed North Icelandic Jet appears to contribute more to the deeper part of the AMOC than the current does, according to research published in the journal Nature Geoscience. (For a graphic, see: link.reuters.com/qev33s)

"Present thinking contends that increased fresh water delivered to the North Atlantic, due to melting ice and increased precipitation under a warming climate, will slow down or halt the overturning" of the AMOC, said study co-author Robert Pickart of Woods Hold Oceanographic Institution.

This might not be the case if the overturning occurs in the interior of the , which feeds the North Icelandic Jet, Pickart said in an email interview from .

"It is not inconceivable that this open-ocean process is less sensitive to fresh water forcing than the presently accepted mechanism ... which might lead one to speculate that the deepest part of the overturning may be less sensitive to climate change," he said.

The existence of the NIJ was suspected for decades but was only confirmed recently by Icelandic researchers using underwater velocity measurements taken from a ship. The NIJ current can't be seen by satellites or detected by its temperature or salinity, but it does move a bit faster than the surrounding water, Pickart said.

Pickart and researchers from and don't know whether the North Icelandic Jet flows year round or how it varies with time. They are beginning a research voyage this week to deploy oceanographic instruments to directly measure the NIJ over the course of a full year to try to figure out where and how this current forms. (Editing by Paul Simao)

Ocean Current Could Lead To Cooling Of Northern Hemisphere Climate

The research vessel Knorr navigates the while taking measurements of the Jet. Image WHOI

An international team of researchers has confirmed the presence of a deep-reaching ocean circulation system off that could have “important ramifications” for ocean circulation’s impact on climate in the Northern Hemisphere.

The current, called the North Icelandic Jet (NIJ), contributes to a key component of the Atlantic Meridional Overturning Circulation (AMOC), also known as the “great ocean conveyor belt,” which is critically important for regulating Earth’s climate.

Climate specialists have been concerned that the conveyor belt is slowing down due to a rise in global temperatures. They suggest that increasing amounts of fresh water from melting ice and other warming-related phenomena are making their way into the northern North Atlantic, where it could freeze, which would prevent the water from sinking and decrease the need for the loop to deliver as much warm water as it does now. Eventually, this could lead to a colder climate in the northern hemisphere.

The team, which includes physical oceanographers from the Woods Hole Oceanographic Institution (WHOI), announced their findings in a paper published in the August 21 online issue of the journal Nature Geoscience.

As part of the planet’s reciprocal relationship between ocean circulation and climate, the “great ocean conveyor belt” transports warm surface water to high latitudes where the water warms the air, then cools, sinks, and returns towards the equator as a deep flow.

Crucial to this warm-to-cold oceanographic choreography is the Overflow Water (DSOW), the largest of the deep, overflow plumes that feed the lower limb of the conveyor belt and return the dense water south through gaps in the Greenland-Scotland Ridge.

For years it has been thought that the primary source of the Overflow is a current adjacent to Greenland known as the Current. However, this view was recently called into question by two oceanographers from who discovered a deep current flowing southward along the continental slope of . They named the current the North Icelandic Jet and hypothesized that it formed a significant part of the overflow water.

Now, the team of researchers—including the two Icelanders who discovered it—has confirmed that the Icelandic Jet is not only a major contributor to the DSOW but “is the primary source of the densest overflow water.” 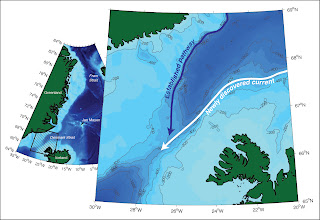 The North Icelandic Jet in cross-section, adjacent to the continental slope of . Image WHOI

“These results implicate water mass transformation and exchange near Iceland as central contributors to the deep limb of the Atlantic Meridional Overturning Circulation, and raise new questions about how global ocean circulation will respond to future climate change,” said Eric Itsweire, program director in the U.S. National Science Foundation (NSF)’s Division of Ocean Sciences, which funded the research.

“In our paper we present the first comprehensive measurements of the NIJ,” said Robert S. Pickart of WHOI, one of the authors of the study. “Our data demonstrate that the NIJ indeed carries overflow water into Denmark Strait and is distinct from the Current. We show that the NIJ constitutes approximately half of the total overflow transport and nearly all of the densest component.

The researchers used a numerical model to hypothesize where and how the NIJ is formed. “We’ve identified a new paradigm,” he said. “We’re hypothesizing a new, overturning loop” of warm water to cold.

While a subsequent cooling of  scenario is far from certain, it is critical that researchers understand the overturning process, he said, to be able to make accurate predictions about the future of climate and circulation interaction. “If a large fraction of the overflow water comes from the NIJ, then we need to re-think how quickly the warm-to-cold conversion of the AMOC occurs, as well as how this process might be altered under a warming climate,” Pickart said.

Pickart and a team of scientists from the U.S., Iceland, Norway, and the are scheduled to embark on Monday on a cruise aboard the WHOI-operated R/V Knorr to collect new information on the overturning in the .

“During our upcoming cruise on the Knorr we will, for the first time, deploy an array of year-long moorings across the entire Denmark Strait to quantify the NIJ and distinguish it from the East Greenland Current,” Pickart said. “Then we will collect shipboard measurements in the to the north of the mooring line to determine more precisely where and how the NIJ originates.”