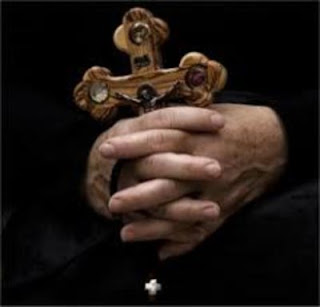 As one may expect, the dissolution of the rule of law opens the door for attacks upon minorities who are terribly vulnerable.  Yet this reports talks mostly about events completely outside the present situation in the Arab world.  Sporadic attacks on Christians are underway whenever security breaks down and there is little one can do about it.  We are all waiting for the Arab world to make its transition into the modern world of which the Arab spring will turn out to be an important step.

At the same time Christian conversions are occurring at an increasing rate in the Muslim world however unlikely that may seem.  The advent of mass media has thrown open the doors for exactly this to occur.

The Arab spring, whatever the outcome locally is about the people demanding a say in their futures through some form of representative government.  So long as the people are prepared to hit the bricks, extremist ideology as a convenient road to power will be stifled.  The mob has learned to absorb casualties as we are now watching in .  Such a power simmering and watching through social media forces those who wish to govern to do so in the interests of all.

Can mob power be turned against a sectarian target?  Of course, but it can only destroy as we have seen in .  Governing councils will naturally work to avoid just such scenarios.

The Arab Spring and Christian Persecution

While the Western media and governments have been preoccupied with the so called “Arab Spring,” little if any attention has been paid to the increased persecution of Christians in the Muslim .

Throughout the region, Christians have been targeted by Muslim mobs killing innocent bystanders, burning churches, and destroying Christian properties. Interviewed by The National on June 19, 2011, Rowan Williams, the Archbishop of Canterbury declared that the Arab Spring is posing a threat to Christian minorities throughout the Middle East.  He added that “extremists were filling vacuums left by ousting of autocratic regimes,” and “leading to Copts being targeted in .”  In , Archbishop Williams warned, “tensions between Christian communities and Muslim majorities were reaching breaking point.”  And, he added that Christians in northern had been subjected to a form of “ethnic cleansing.”  The archbishop made his comments in an interview with BBC radio on August 30, during which he said that even in , Christ’s birthplace, the once-majority Christian population had now become a “marginalized minority.”

The Voice of radio interviewed Egyptian Human Rights activist, Waukee Yakub, and when asked what happened between the Salafi Muslim groups and the Coptic-Christians he replied: “After the revolution of January 25th Salafis came to power. And the only side with which they conflict a lot with is the Coptic Orthodox Christians. They know we are peaceful people and we don’t hurt anyone and they started attacking churches, stop attacking even other Muslim people – the Sufi Muslims that they don’t like. What’s happening now is that it seems like the Military Council that rules the country right now is totally involved with them and constantly agrees them. We have videos and lots of pictures that prove that they do nothing when it comes to attacks on Christians.”

As the interview with the Voice of continued, Yakub added: “The problem is with Salafi fanatics who have al-Qaeda-styled thinking.  It’s exactly al-Qaeda thinking: ‘We are rejecting others; we want to kill the Christians; and, we want to make the Christians leave the country.’ I have witnessed an incident in Imbaba, when a house was burning, and furniture was thrown out of the windows, while water quenching vehicles and the police stood there doing nothing. It was happening right in front of them. I’ve seen my own church set on fire and burning like hell and nothing was done. No one was arrested, though we have videos that show faces of the people, who are very well-known.”

The American Coptic Association reported on August 30, 2011 that during an annual meeting in , also known as “Meeting for Friendships Among People,”
Cardinal Antonios Naguib, patriarch of the Catholic Church in , said he was concerned about minorities’ rights after the 25 January, 2011 Egyptian revolution. “Islamists will have great representation in the next parliament, which is normal. We should recognize its political force…but some fear they will assume power and impose an Islamic State.”

A brief regional survey of recent cases of religious persecution of Christians reveals a clear pattern which neither the U.N. nor the European Union has responded to.  In , a 32-year old convert to Christianity named Youcef Nadarkhani was sentenced to hang for abandoning Islam for Christianity – a State crime. Nadarkhani has been in jail since October 2010 and has, so far, refused to recant his Christian faith.  If he is hung, he would become the first Iranian to be put to death for apostasy since 1990.

Saudi Arabia, an alleged ally of the U.S., forbids any kind of non-Muslim religious ceremony – public or private. If caught with a Bible, violators are sent to prison and then deported. A story in the Washington Times (11/14/05) underscored the religious intolerance of Saudi Arabia when stating that: “A court sentenced a teacher to 40 months in prison and 750 lashes for “mocking religion” after he discussed the Bible and praised Jews, a Saudi newspaper reported yesterday.”

In , , the personal driver of Bishop Luigi Padovese, head of the Catholic Church in , was a Muslim named Murat Altun, who repeatedly stabbed and decapitated the Bishop and then proceeded to shout “I killed the great Satan. Allahu Akhbar.” The brutal murder of Bishop Luigi Padovese, on June 3, 2010, shocked the small and hard pressed Christian community in .  The 62 year-old bishop had been spearheading the ’s efforts to improve Muslim-Christian relations in .

Muslim violence against Christians in reached a new height in 2010 following the fire-bombing of churches in and elsewhere throughout the country. It resulted in the flight of more than two-thirds of the ancient Iraqi Christian community.  The Iraqi Christian leaders called off Christmas celebrations in 2010.  A December 23, 2010 news item in The Richmond Times-Dispatch reported that “Christians across Iraq have been living in fear since the assault on Our Lady of Salvation Church on Oct. 31 as members of this Catholic congregation were celebrating Sunday Mass.  Sixty-eight people were killed. Days later, Islamic insurgents bombed Christian homes and neighborhoods across the capital.  Later, al-Qaida insurgents threatened more attacks on ’s Christians, many of whom have fled their homes or the country since the church attack. A council representing Christian denominations across Iraq advised followers to cancel public celebrations of Christmas out of concern for their lives and to mourn the victims.

Chaldean Archbishop Louis Sako of Kirkuk in northern Iraq summed up the situation, “Nobody can ignore the threats of al-Qaida against Iraqi Christians. We cannot find a single source of joy that makes us celebrate. The situation of the Christians is bleak.”

Historically there were Christian dominated enclaves in countries throughout the Middle East, such as in . Today, the remaining 1.5 million Christians represent merely a third of the population and are threatened. Likewise in Bethlehem, where the Palestinian Authority now controls the city – the birthplace of Jesus – the Christians have been pushed out through intimidation and murder, resulting in a diminution from a majority to less than 15% of the city’s population.  In an ironic twist, the Muslim Palestinian Authority has banned the sale of souvenir crosses to tourists…

The Washington based Christian Post headlined its December 24, 2007 issue with “Gaza Christians observe somber Christmas after murder” and the Financial Times (FT) of April 22, 2011 reported that in a square in Nazareth, right below the Basilica of the Annunciation, a Koranic verse warns that “whoever seeks a religion other than Islam, it will never be accepted of him, and in the Hereafter he will be one of the losers.” Yet, it is the spectre of losing in the here-and-now that most haunts the dwindling number of adherents to Christianity in the land of his birthplace…

Throughout the today, Christians have become endangered species.  They are under threat from radical Islamists who have seized the opportunity, with mayhem in the Arab world, to settle the score with their Christian countrymen. With limited opportunities available to them in the Arab world, Christians now seek new lives elsewhere in Europe, as well as in North and . Those remaining are accused by Muslims of “complicity in the schemes of foreign predators.”  The FT conclusion is that “The wave of revolution ripping through the region would uncover the submerged hard-wiring of sectarianism.”

The fate of Christians in the Middle East may not be the same as that of the Jews in on the eve of World War II; they do have the option to leave while the Jews did not. However, what is rather similar is the abandonment of the Middle East Christians by the liberal/mainline Protestant churches, which have been putting their energies into divestment from campaigns rather than using their resources to support their persecuted Christian brothers and sisters in the . The lack of solidarity in the West by the churches, governments, and media to the plight of the Christian minorities is abominable.

The Arab Spring is becoming a nightmare for Christians in the Arab-Muslim world, but that is obviously not the focus of our secularized and, at times, anti-Christian mainstream western media.

Persecution has always been the fertilizer for religion: Christian, Moslem or Jewish.