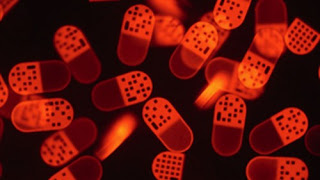 New detection technology is always welcome and this one appears able quickly pick up on cancer markers.  Obviously this is early days, but with a working tool, characterizing the markers should advance apace.

It has be come easy to envisage a future in which a cancer diagnosis is a simple blood test away to be followed up with a simple treatment consisting of an injection of nanogold combined with radio heating to eliminate gross problems and a viral attack on any remnants.

It really will and can become that easy and once all that is in place, humanity will practically forget that cancer even exists and will hold no fear of it whatsoever.  We did the same to small pox and polio.

Early disease detection can be a matter of life and death, especially if that disease is cancer. In a novel approach to this problem, researchers from MIT have engineeringed a series of ultra-microscopic particles, each designed to bind to a disease-specific type of microRNA - a genetic material which affects gene expression in the nucleus. In cancer cells, the microRNA has somehow malfunctioned, leading to rapid, unregulated cell growth that can ultimately form tumors.

"There are many challenges to detecting microRNA. There's not an accepted gold standard," says MIT team leader and professor of chemical engineering Patrick Doyle. "Everybody has their own favorite one."

First discovered in 1993, microRNAs are short pieces of non-protein-coding regulatory ribonucleic acid (RNA) averaging 20 nucleotides in length. To date, nearly 1000 have been identified in the human genome. As it turns out, different cancers produce unique microRNA strands, and numerous techniques for detecting them have been developed. Of those, most involve the lengthy process of isolating and purifying RNA from blood or tissue samples first, before the microRNA can be characterized.

"Detecting microRNA from a blood sample would be much more efficient," Doyle says. Not to mention faster, and with cancer, time is of the essence.

The MIT technology uses microscopic hydrogel particles around 200 micrometers in length, each one studded with literally millions of identical DNA snippets. (Hydrogels are cross-linked, water-absorbing polymers that have an affinity for nucleic acids, the building blocks of both RNA and DNA). Attached to every piece of DNA is a short sequence that will bind to a fluorescent probe, which is added later in the process.

To perform a blood serum assay, a mixture of particles are added to a 25 microliter droplet. If there's any microRNA present, it binds to its complementary DNA strand. The fluorescent probe is then added and the researchers employ a custom-made microfluidic scanner to measure each particle's fluorescence. Individual particles are also imprinted with a chemical "barcode" that identifies the strand of microRNA being detected. From start to finish, a sample can be assessed in less than three hours.

"This approach is 100 times more sensitive than other particle technologies for detecting microRNA," Doyle notes.

In fact, with its ability to sense as few as 10,000 strands of a specific microRNA, this new hydrogel technique yields more reliable results than other currently available procedures which utilize fluorescent probes as labels. That's good news, especially since speed and accuracy are both valuable traits in the realm of cancer detection. The company Doyle co-founded, Firefly Bioworks is working to perfect a device for commercial use.