This is a recent revelation and an important one.  There is still little hope of recovering DNA yet one can not think of a better place to look and we have had recovery from dinosaur fossils claimed.  It is a good start to recognize a dinosaur feather.

It strikes me that extensive feathered lined nests existed among the resin producing trees and that such locations were ideal for this type of fossil production.

A unique discovery has been made in southern : perfectly preserved dinosaur feathers.

The first prehistoric feathers were found perfectly preserved in amber uncovered in southern .

This marks the first time such a sample has been found -- a real change for experts who are used to studying feathers fossilized in rock.

"It's a kind of preservation that can have a lot of detail, but in amber what you have essentially is the original feathers and they're preserved in three dimensional detail," said Dr. Philip Currie, with the University of Alberta.

Currie said researchers at the University of Alberta will be able to study the feathers in more detail than before, since they are so well-preserved and can even see colour. 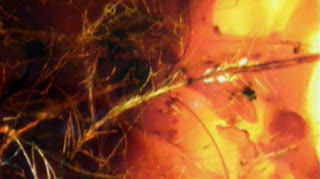 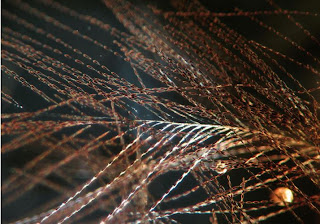 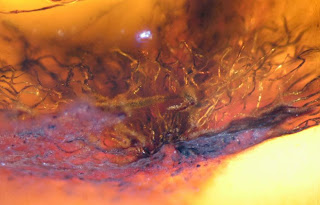 Dinosaur and bird feathers preserved in amber from a Late Cretaceous site in Canada reveal new insights into the structure, function, and color of animals that date back to about 78 million years ago.

Researchers led by paleontologist Ryan McKellar say these specimens represent distinct stages of feather evolution, from early-stage, single filament protofeathers to much more complex structures associated with modern diving birds. After analyzing the preserved pigment cells, the authors add that these feathered creatures may have also had a range of transparent, mottled, and diffused colors, similar to birds today. They can't determine which feathers belonged to birds or dinosaurs yet, but they did observe filament structures that are similar to those seen in other non-avian dinosaur fossils. Their findings appear in the current issue of the journal Science.

In the gallery below, with captions from McKellar, marvel at the beauty of these amber-preserved feathers. Then, in the Q&A that follows, learn more about how amber preservation works, the science of feather evolution, and the possibility of Jurassic Park-type experiments down the line. 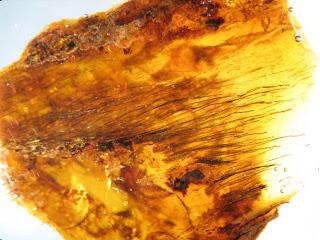 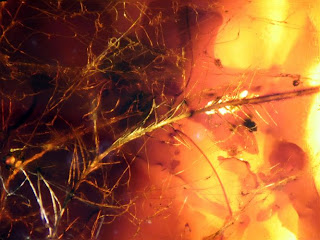 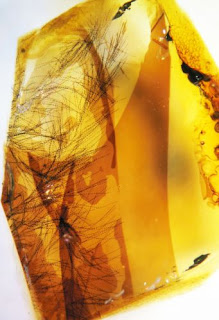 A feather barb trapped within a spider’s web in Late Cretaceous Canadian amber. This barb displays microscopic features that indicate it was once part of a vaned feather and was likely borne by a flying bird. This particular specimen began our search for additional feather inclusions in the amber deposit.

How significant is this discovery?

This discovery is a pretty significant find. It supports a model for the evolution of feathers that has previously relied on compression fossils that are difficult to interpret and have been hotly debated.

Also, the amber-entombed feathers show that some of the most primitive feather types, also known as protofeathers, were still around just before the dinosaurs went extinct. They existed alongside feathers that are nearly identical to those of modern birds. Given what we know about the animals that were alive in the area at the time, it is reasonable to suggest that the protofeather-like specimens are attributable to dinosaurs and are the first specimens of this type of feather to be recovered from amber.

How does amber preservation work exactly?

Preservation in amber can vary quite a bit among deposits. Amber tends to preserve specimens in great detail because tree resin has antibacterial and drying properties that partially mummify inclusions and slow the initial onslaught of decay. Over many years, the resin polymerizes, turning into a plastic-like substance that is quite resilient, but burial usually results in heating that can have a profound effect on the inclusions over the span of millions of years.

The Canadian amber insect inclusions are largely preserved as hollow voids in the amber, with a thin film of carbonized, coal-like material, where the outside of the insect once was. The feathers appear to have fared much better, because they are fine and are not composed of material that decay easily. That said, many of the specimens show signs of partial decay, and there is no indication of how much, if any, original material remains intact.

What's the backstory of these specimens?

What originally got me interested in this project was a single feather fragment trapped in a spider web that had been given to Dr. Brian Chatterton. For my Ph.D. project, I worked on tiny, less than three millimeter, parasitic wasps trapped within amber from the same deposit. As part of this project I was able to go through the of Palaeontology collection of 3,000 or so inclusions in great detail. After finding a lot of feather fragments in this collection, I had the good fortune of meeting the Leuck family, amateur collectors in southern , who donated a pair of additional specimens to the . Later, we learned that Dr. Philip Currie was also examining a trio of specimens from the deposit. We pooled the material, creating a surprisingly rich snapshot of feathers in the Late Cretaceous.

This project underlines the importance of maintaining museum collections as well as the role that interested amateurs can play in palaeontology. Without these, there is no way that we would have been able to observe these important specimens.

According to your paper, these feathers represent several distinct stages of feather evolution. Could you explain each stage briefly?

The evolutionary-developmental model is an attempt to explain how the transition from small hair-like feathers to modern feathers with multiple tiers of branching occurred. A quick account of modern feather anatomy would go like this: Feathers have a central shaft called the rachis. Off of this shaft branch the tufts, which in turn branch off into small structures called barbules that are segmented like bamboo shoots.

Stage 1 consists of individual filaments that are comparable to hair in terms of overall appearance. Stage 2 consists of multiple filaments that arise from a single base, forming barbs. Stage 3 is where feathers become branched structures, either by forming segmented barbules on their barbs or by forming barbs on their central shaft, the rachis, and then combining these features to make two tiers of branching. Stage 4 is where the barbules on each side of the barb were altered to connect barbs together and form a sheet or vaned feather. Stage 5 encompasses a wide range of finer alterations that actually permit powered flight and a wide range of additional uses for feathers.

The notion of dinosaur specimens preserved in amber reminds me of .

Would what happened in that movie be plausible? What can we look forward to learning?

Put simply, no. The specimens that we examined are extremely small and would not be expected to contain any DNA material. To put this into context, the only genetic material that has been recovered from amber is from lumps of mummified insect muscle tissue in much younger Dominican amber that are approximately 17 million years old and well after the age of dinosaurs.

If we are able to obtain more material, we would really like to examine the chemical makeup of the protofeather-like specimens, as well as the pigments found within these specimens and other feathers. It would then be possible to investigate how much of the original feather material remains intact and gain a better understanding of the feathers' colors.

Unfortunately, these investigations rely on being able to create small breaks within some of the specimens and examine them under very high magnifications, such as scanning electron microscopy, so they are not possible with the limited number of specimens that are currently available. A larger collection may also allow us to verify some of the other stages in feather evolution.
Posted by arclein at 12:01 AM