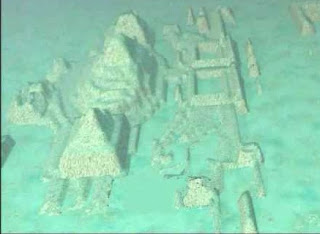 It appears that they have taken the sonar data and successfully reconstructed a 3D image of the structure lying on the ocean floor just off Cuba. This is solid and completely convincing. I got this link originally from Dale Drinnon in his recent Frontiers of Antropology.

More importantly these structures are certainly contemporaneous with the Egyptian complex whatever is been said. This means inspired by the Atlantean Bronze Age sea trade based civilization of which we have posted extensively.

Way more important in terms of my many interlinked conjectures, this confirms a major subsidence event dating around 1159 BC. I had linked it to an eruption at Hekla, but that looks like a side show. At the time uplifted portions of the Mid Atlantic Ridge subsided also including Lyonese and the home islands and land mass around the Azores. Even if that had not happened, this subsidence was amply large enough.

This would have produced an orthogonal pressure forcing subsidence to either East or West. Since the ridge between Cuba and Yucatan is the natural point of weakness between the Gulf subsidence basin and the Caribbean subsidence basin, it naturally subsided deeply. The driver for all this was the hydrostatic changes brought about by both the original crustal shift of 12900 years ago that I have called the Pleistocene Nonconformity and the slow uplift of the Hudson Bay Basin brought about by the ending of the Ice Age. I suspect that we are all pretty safe now.

Even if we only recognize the Hudson Bay Uplift the Cuban Subsidence is a natural adjustment.

I suspect that all these major subsidence events happened at the same time although that is not necessary.

Pyramids under the waters of Cuba were discovered by two scientists Paul Weinzweig and Pauline Zalitzki. They found the ruins of ancient buildings for about a mile below the sea and considered them to be Atlantis.

Paulina found elsewhere in Cuba ancient descriptions and symbols that was identical to those on the waterfront structures below.

They found sphinxes, stones that arranged like Stonehenge, and a written language engraved on the stones.

Why it was not discovered before?

The U.S. government discovered the alleged place during the Cuban missile crisis in the sixties, Nuclear submarines cruising in the Gulf (in deep sea) met pyramid structures. They immediately shut down the site and took control of him and the objects,in order that it will not come to Russians hands.

A whistleblower from the army,that used to serve in Montego Bay told they are still working on the site and recover objects and instruments (including those who still work) since the 60th.

This area in Cuba could not be over waterfront less than 10,000 years ago…

This is an update out of wikipedia. The quoted depths are much easier to account for than the original estimation or lack thereoff.

Cuban underwater city refers to a site thought by some to be a submerged granite complex structures off the coast of the Guanahacabibes peninsula in the Pinar del Río Province of Cuba.[1][2][3]
Sonar images interpreted as being symmetrical and geometric stone structures resembling an urban complex were first recorded in early 2001 covering an area of 2 square kilometres (200 ha) at depths of between 600 metres (2,000 ft) and 750 metres (2,460 ft).[1] The discovery was reported by Pauline Zalitzki, a marine engineer, and her husband Paul Weinzweig, owners of a Canadian company called Advanced Digital Communications,[4] working on an exploration and survey mission in conjunction with the Cuban government. The team returned to the site a second time with an underwater video robot that filmed sonar images interpreted as various pyramids and circular structures made out of massive, smooth blocks of stone that resembled hewn granite. Zalitzki said "It's a really wonderful structure which really looks like it could have been a large urban centre, However, it would be totally irresponsible to say what it was before we have evidence." [1]
After studying the images, National Geographic senior editor John Echave said "They are interesting anomalies, but that's as much as anyone can say right now, but I'm no expert on sonar and until we are able to actually go down there and see, it will difficult to characterize them." Professor of Oceanography Robert Ballard was quoted as saying "That's too deep, I'd be surprised if it was human. You have to ask yourself, how did it get there? I've looked at a lot of sonar images in my life, and it can be sort of like looking at an ink blot -- people can sometimes see what they want to see. I'll just wait for a bit more data."[5]
Marine Geologist Manuel Iturralde called for more samples before drawing conclusions about the site, saying "We have some figures which are extremely unusual but nature is much richer than we think." Estimating that it would have taken 50,000 years for such structures to have sunken to the depth at which they were said to be found, he said "50,000 years ago there wasn't the architectural capacity in any of the cultures we know of to build complex buildings." A specialist in underwater archaeology at Florida State University added "It would be cool if they were right, but it would be real advanced for anything we would see in the New World for that time frame. The structures are out of time and out of place."[4]

Anyone have GPS coordinates?