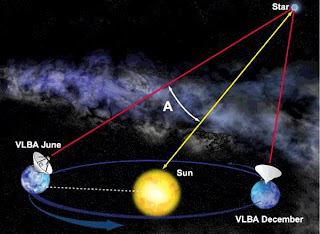 One would think that with the huge advances in imaging technology, that we would have a superior grasp of the relative positions of our stellar neighbors.  Most folks do not know we are part of a supergroup of some sort and plenty of support suggests we are orbiting around Sirius or a companion.

Now the work outlined here strongly suggests that the accepted local distances are seriously over stated by a factor of around three.

Surprisingly when I reviewed work on the likelihood of Sol orbiting Sirius, I felt disquiet because I intuited that the apparent distance was much larger than it should be for the maintenance of long term stable orbits.  That issue is eliminated if this work is correct.  In other words I have an interest in this work been right.

What is needed now is a full press analysis of the location and true apparent motion of all stars inside the sphere provided by our capacity to use parallax.  Even more we need to launch a Hubble equivalent to begin detailed mapping of near space preferably with another scope following Earth at the Lagrange point to provide simultaneous parallax to increase resolution.

We may even be able to discover some of those gas giants zooming around out there.

So what is Stellar Parallax, Annual Parallax?

How does it relate to Stellar Distance, the distance of Alpha Centauri and Sirius in particular?

What is the difference between a distance of a mere Lightyear, and that of a Parsec?

How does the Covert Institution of Astrophysics ACTUALLY determine Stellar Distance from Parallax?

And how does that compare to the fluff, disinfo, they tell the public?

Why does Aerospace & Astrophysics defraud the public?

If you google Parallax (Google will help, sugges3ing terms like Parallax Diagram, Parallax of Stars) or Stellar Parallax or Annual Parallax you will find hundreds of public disinfo illustrations and discussions.

These sites will almost always tell you, truly, that Stellar Parallax is the change in apparent position of a nearby star, the change of angle with respect to the viewer and the background stars, that we see. [In particular, a century ago, from the displacement of the star image on a photographic plate, with respect to the background stars. To the extent that the difference was measureable, we could then make a rough estimate of the distance of the nearby star.] 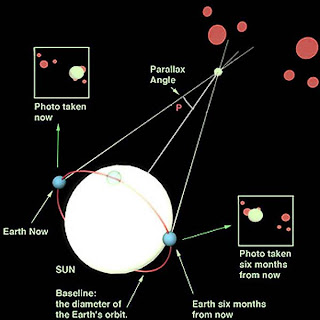 The Covert Institutional websites will then tell you, again correctly, that to get a big enough parallax angle, big enough to be accurate to 2 or 3 significant digits (99 percent to 99.9 percent accurate) -- we need a very long baseline, distance, between the two different measurements. Thus the term VLBA, Very Long Baseline Astrometry. Astrometry meaning astronomical measurement.

Thus, as these diagrams show, the concept of measuring the Parallax Angle from Earth at two different times, six months apart, at opposite ends of the Earth's orbit around the Sun. At a, seeming, distance of 2 AU, two Astronomical Units from each other. An AU is the distance from the Earth to the Sun, about 8.3 light minutes average. [1 light year = 525,949 light minutes. 1 Parsec = 3.26 light years.] 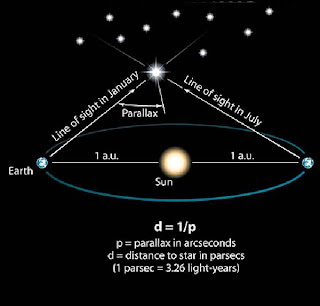 The final dumbing down, stupyfying, 'simplying', which they will relate is illustrated above.

After this, you have no Big Brother Gangster to guide you. You have only me, and your self! (If you are able to do simple ( high school level, Japanese junior high school level) math, algebra, geometry, trigonometry.

Look again at the illustrations above, and the one below. What is relevant in the measurement of the Parallax Angle: 1) from the Earth, 2) to the Target Star, 3) with respect to the Reference Star?

Only the lateral, transverse, sideways, tangential movement, displacement, due to velocity, between the Earth and Target Star and Reference Star.

And here, and everywhere, the  tells you that ONLY THE EARTH AND THE TARGET STAR MOVE!!!

What is simply, wholly, laughably, ludicrously, wrong with that statement?

Do you hear the  Scarlet Pimpernel singing, returned, again? 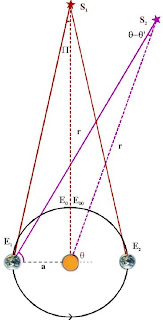 What ELSE is moving in this picture?

The absolute velocity of the Sun, however, is 220 km/sec, around the Galaxy!

And so are the (average) absolute values of the Velocities of ALL TARGET STARS, all local stars of the 'Local Fluff' or Solar Neighborhood, as well as the Sirius Supercluster, Sirius Moving Group, Sirius-UMa Stream!! 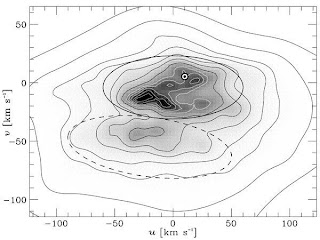 In this Hipparcos Parallax Database of 6,000 Neighbor Stars, you will notice the VELOCITIES RELATIVE TO OUR SUN range from plus-or-minus 100 km/sec, the majority being about plus-or-minus 40-50 km/sec!! 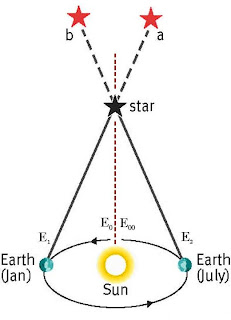 From my discussions last year, with Walter Cruttenden and our Sirius Sol discussion group, you will recall the devastating error to the Covert State pronouncements of the distances of Alpha Centauri and Sirius -- the difference in Parallax resulting from a change of Earth Velocity of 20 km/sec to Solar or Target Star velocity of 220 km/sec could result, my first guess, in D=1/P above being changed by a factor of eleven. Say from 8.6 covert lightyears for Sirius, to 99 lightyears, or to 3/4 of a lightyear, 0.75 lightyears! For Alpha Centauri the numbers could go from 4.3 lightyears to 61 lightyears, or 1/3 of a lightyear, 0.37 lightyears!! 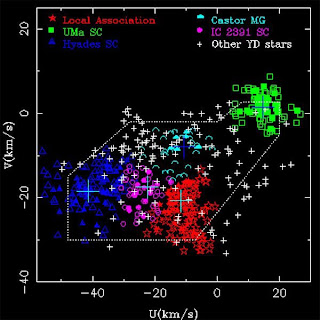 you can also see the Local Supercluster, Moving Group, Stream Velocity articles listed here on the Thunderbolts Forum: Court of the 'Knights Parallax' 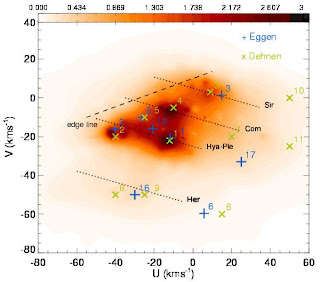 So what was left out of the Black-Ops Parallax Algebra, the Covert Parallax Calculus? Which of our Stellar Parallax Distance Determination questions is yet unanswered? Is there a Parallax Shift that you and I can derive, measure, determine ourselves? (Yes!)

All the data we want, the variables, the numbers we need are available in the Hipparcos database, and will be a thousand times more so, more accurate, with more stars, in the forthcoming GAIA database. The crux, of course, is that unless you resdie 'behind the veil', are a upper level owner/manager of the Intelligence State, the Security State, you will not know, will not be given the correct 'gauge' (fudge factor) for correcting the distance determination from Covert to Real. [Recall your history, the 'proprietary' hold that the Sumerian Kings, the Phoenicians, the Celts, all Sea-Powers maintained on their Sea Maps; the recent rise of the British 'Admiralty-based' , gave way to the 20th Century US-Aerospace World Dominion.

The algebra and numbers are simple. Just take the vector sum of the two EXTRA relevant velocities, the lateral (perpendicular) velocities of the Sun and the Target Star with respect to each other. This will give you the net correction to multiply the D=1/P result provided by the Hipparcos Science Team. That is, add the Velocity of the Earth (about 19.1 km/sec) over the six months, and do a vector add of the relative Velocity of the Sun and the Target Star. [Add the velocities if they are in the same direction, subtract the velocities if they are in opposite directions.] If the velocities ADD, then that means that the Distance Determination is too small by the factor Ve + Vst over Ve (Relative Velocity of the Sun and Target divided by the Velocity of the Earth). Which is to say that in this case the Parallax was smaller than it appeared. If the Velocities of the Earth and Sun/Target SUBTRACT, then the Parallax is greater than it appeared, and the Covert Distance Determination is too LARGE by the factor Ve over Ve + Vst. 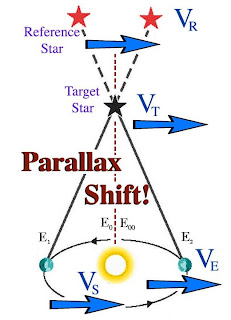 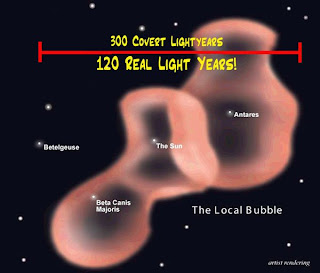 Fortunately there are dozens of ancient 'sciences', disciplines, which are as accurate, and far more accurate, than 20th century Covert physics, aerospace, astrophysics, gauge theory, etc, etc. (as the latter are 'culturally' designed to give vastly wrong results to the public.) These, sacred, older disciplines give us numbers for the periodic cycles (wavelengths and frequencies) of the trajectories of our neighbor planets, stars and moving groups -- by which we have MANY sets of distances and velocities for Alpha Centauri, for Sirius, for the Sirius-UMa Stream, for the Ursa Major Moving Group, for the Local Association. 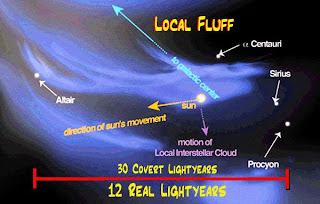 With our Sacred Data Sets we can determine the Covert Fudge Factors, and thus the corrections to the whole Sirius Sol, Sirius-UMa, '4D Filamentary Serpent Velocity Group' equations. 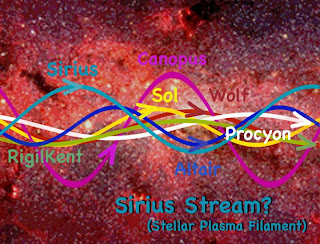 A factor of 2.5 REDUCTION TO THE COVERT DISTANCE of our Local Neighbor Serpent Stellar Deities being the convergence, as of today, of all the numbers I have brought together over the last twenty years. 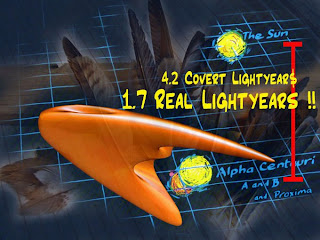 Singing the PachaMama, all our Sacred Serpent Relations, returning ...