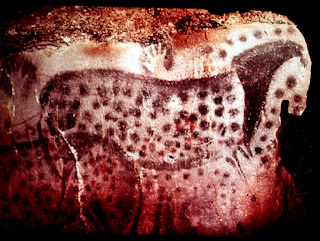 The upshot is that the funny looking horses did exist at the time that they were painted by Paleolithic man.  So much for theories of an early abstract sensibility.  Perhaps we can breed them back.

It is good to see DNA work marching fully into the world of archeology where there is plenty of interesting questions.

The next decade will be the heyday of this methodology as we test everything sitting in a museum.  We may even be able to sort out a few dinosaur fossils while we are at it.  Observe we can identify the leopard spot gene in horse DNA that is say 20,000 plus years old.

Capturing genetic information from ancient burial sites is clearly superior to attempting to interpret bone evidence which is assuredly variable.

An international team of researchers has used ancient DNA to shed new light on the realism of horses depicted in prehistoric cave paintings.

The team, which includes researchers from the , has found that all the colour variations seen in Paleolithic cave paintings -- including distinctive 'leopard' spotting - existed in pre-domestic horse populations, lending weight to the argument that the artists were reflecting their natural environment.

The study, published in Proceedings of the of Sciences (PNAS) today, is also the first to produce evidence for white spotted phenotypes in pre-domestic horses. Previous ancient DNA studies have only produced evidence for bay and black horses.

Archaeologists have long debated whether works of art from the Paleolithic period, particularly cave paintings, are reflections of the natural environment or have deeper abstract or symbolic meanings.

This is particularly true of the cave painting "The Dappled Horses of Pech-Merle" in France, which dates back more than 25,000 years and clearly depicts white horses with dark spots.

The dappled horses' spotted coat pattern bears a strong resemblance to a pattern known as 'leopard' in modern horses. However, as some researchers believed a spotted coat phenotype unlikely at this time, pre-historians have often argued for more complex explanations, suggesting the spotted pattern was in some way symbolic or abstract.

Researchers from the UK, Germany, USA, Spain, Russia and Mexico genotyped and analysed nine coat-colour loci in 31 pre-domestic horses dating back as far as 35,000 years ago from Siberia, Eastern and Western Europe and the Iberian Peninsula. This involved analysing bones and teeth specimens from 15 locations.
They found that four Pleistocene and two Copper Age samples from Western and shared a gene associated with leopard spotting, providing the first evidence that spotted horses existed at this time.

In addition, 18 horses had a bay coat colour and seven were black, meaning that all colour phenotypes distinguishable in cave paintings -- bay, black and spotted -- existed in pre-domestic horse populations.

Professor Michi Hofreiter, from the Department of Biology at the , said: "Our results suggest that, at least for wild horses, Paleolithic cave paintings, including the remarkable depictions of spotted horses, were closely rooted in the real-life appearance of animals.

"While previous DNA studies have produced evidence for bay and black horses, our study has demonstrated that the leopard complex spotting phenotype was also already present in ancient horses and was accurately depicted by their human contemporaries nearly 25,000 years ago.

"Our findings lend support to hypotheses that argue that cave paintings constitute reflections of the natural environment of humans at the time and may contain less of a symbolic or transcendental connotation than often assumed."

The data and laboratory work were led by Dr Melanie Pruvost, from the Department of Evolutionary Genetics at the Leibniz Institute for Zoo and Wildlife Research and the Department of Natural Sciences at the German Archaeological Institute, both in Berlin. The results were replicated in laboratories at the .

Dr Pruvost said: "We are just starting to have the genetic tools to access the appearance of past animals and there are still a lot of question marks and phenotypes for which the genetic process has not yet been described. However, we can already see that this kind of study will greatly improve our knowledge about the past. Knowing that leopard spotting horses were present during the Pleistocene in provides new arguments or insights for archaeologists to interpret cave arts."

Dr Arne Ludwig, from the Leibniz Institute for Zoo and Wildlife Research in Berlin, added: "Although taken as a whole, images of horses are often quite rudimentary in their execution, some detailed representations, from both Western Europe and the Ural mountains, are realistic enough to at least potentially represent the actual appearance of the animals when alive.

"In these cases, attributes of coat colours may also have been depicted with deliberate naturalism, emphasizing colours or patterns that characterised contemporary horses."

Exact numbers of Upper Paleolithic sites with animal depictions are uncertain because of ongoing debates about the taxonomic identification of some images and dating. However, art of this period has been identified in at least 40 sites in the Dordogne-P--gord region, a similar number in coastalCantabria and around a dozen sites in both the Ard--e and Ari-- regions.

Where animal species can be confidently identified, horses are depicted at the majority of these sites.

Professor Terry O'Connor from the 's Department of Archaeology was involved in the interpretation of the results. He said: "Representations of animals from the Paleolithic period have the potential to provide first-hand insights into the physical environment that humans encountered thousands of years ago. However, the motivation behind, and therefore the degree of realism in these depictions is hotly debated.

"The depictions of horses at Pech-Merle in particular have generated a great deal of debate. The spotted horses are featured in a frieze which includes hand outlines and abstract patterns of spots. The juxtaposition of elements has raised the question of whether the spotted pattern is in some way symbolic or abstract, especially since many researchers considered a spotted coat phenotype unlikely for Paleolithic horses.

"However, our research removes the need for any symbolic explanation of the horses. People drew what they saw, and that gives us greater confidence in understanding Paleolithic depictions of other species as naturalistic illustrations."

Leopard complex spotting in modern horses is characterised by white spotting patterns that range from horses having a few white spots on the rump to horses that are almost completely white. The white area of these horses can also have pigmented oval spots known as 'leopard spots'.

Dr. Monika Reissmann, from Humboldt University's Department for Crop and Animal Sciences, explained: "This phenotype was in great demand during the Baroque Age. But in the following centuries the leopard complex phenotype went out of fashion and became very rare. Today leopard complex is a popular phenotype in several horse breeds including Knabstrupper, Appaloosa and Noriker and breeding efforts have intensified again because there is a growing interest in the restoration of these horses."

The fact that four out of 10 of the Western European horses from the Pleistocene had a genotype indicative of the leopard complex phenotype, suggests that this phenotype was not rare in Western Europe during this period.