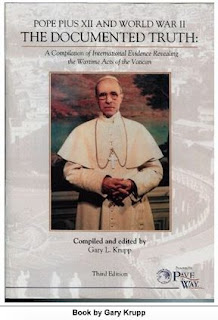 For a number of reasons, the reputation of Pope Pius XII was clouded by a series of calumnies after the WWII.  Foremost is the propensity of the uninformed to want to believe the worst in people when that worst is noised about by their enemies.  Just how do you think Hitler got away with his outrageous propaganda against the Jews?

On top of that it is claimed here and it makes such sense that I wonder why it has not been central to historical research long since, that the soviets promoted the big lie about Pope Pius XII during the post war era.  Of course they did!  They were in a fight to the death with the and its political supporters to stage a communist takeover of itself.  This did not truly end until the creation of the ECM began to restore economic vitality to .  Few recall today just how touch and go it was then in the early days of the Cold War.

During this era the defenders of the Pope were unable to overcome the attack itself in the public relations arena and because the war was still too fresh and the future uncertain, it made much sense to follow traditional Catholic practice of simply keeping quiet in case a second period of dire need was in the offing.

That the Church worked actively at counter purposes to the Nazis is both known and also a given.  The Church was always the mortal enemy of both Communism and Nazism.  It simply was not a hot war, but suppression was inevitable once either felt powerful enough.  Also never forget that it was the strongly suppressed Catholic Church that persistently undermined Communist authority in and elsewhere that ultimately triggered the sudden collapse of that ideology.  Also never forget that it was no accident.  Look instead to and observe how even utter failure can remain.

A Pope who went undercover to save Jews in the Holocaust

Author finds further evidence of the work of Pope Pius XII to save Jews during WWII.
Monday, November 07, 2011

The Jewish New Yorker who has made it his life’s work to clear the name of Pope Pius XII of being anti-Semitic says he believes the wartime pontiff actually went undercover to save the lives of Jews in .


Gary Krupp came across the evidence in a letter from a Jewish woman whose family was rescued thanks to direct intervention.


“It is an unusual letter, written by a woman who is alive today in northern Italy, who said she was with her mother, her uncle, and a few other relatives in an audience with Pius XII in 1947,” Kruppexplained. Next to Pope Pius during the meeting was his Assistant Secretary of State, Monsignor Giovanni Montini, the future Pope Paul VI.


“Her uncle immediately looks at the pope and he says, ‘You were dressed as a Franciscan,’ and looked at Montini who was standing next to him, ‘and you as a regular priest. You took me out of the ghetto into the .’ Montini immediately said, ‘Silence, do not ever repeat that story.’”


Krupp believes the claim to be true because the personality of the wartime pope was such that he “needed to see things with his owneyes.”


“He used to take the car out into bombed areas in , and he certainly wasn't afraid of that. I can see him going into the ghetto and seeing what was happening,” says Krupp.


Krupp and his wife, Meredith, founded the Pave the Way Foundation in 2002 to “identify and eliminate the non-theological obstacles between religions.” In 2006 he was asked by both Jewish and Catholic leaders to investigate the “stumbling block” of Pope Pius XII’s wartime reputation. Krupp, a very optimistic 64-year-old from , thought he had finally hit a wall.


But when he started looking at the documents from the time, Krupp said he was shocked. And “then it went from shock to anger. I was lied to,” says Krupp.
“In Judaism, one of the most important character traits one must have is gratitude, this is very important, it is part of Jewish law. Ingratitude is one of the most terrible traits, and this was ingratitude as far as I was concerned.”


Krupp says he now firmly agrees with the conclusions of Pinchas Lapide, the late Jewish historian and Israeli diplomat who said the direct actions of Pope Pius XII and the saved approximately 897,000 Jewish lives during the war. Pave the Way has over 46,000 pages of historical documentation supporting that proposition, which it has posted on its website along with numerous interviews with eyewitnesses and historians.

“I believe that it is a moral responsibility, this has nothing to do with the Roman Catholic Church,” says Krupp, “it has only to do with the Jewish responsibility to come to recognize a man who actually acted to save a huge number of Jewish lives throughout the entire world while being surrounded by hostile forces, infiltrated by spies and under the threat of death.”


Krupp explained that Pope Pius used the Holy See’s global network of embassies to help smuggle Jews out of occupied . In one such instance, the secretly asked for visas to the – 800 at a time – to aid Jewish rescue efforts. This one initiative alone is estimated to have saved over 11,000 Jewish lives between 1939 and 1945.


Closer to home, the convents and monasteries of -- neutral territory during the war -- were used as hiding places for Jews.


Krupp speculates that the wartime actions of Pope Pius XII, whose birth name was EugenioPacelli, can be further understood in the light of his own personal history. His great boyhood friend was Guido Mendes, who hailed from a well-known Jewish family in . Together they learned the Hebrew language and shared Shabbat dinners on the Jewish Sabbath.

Later, upon his election to the papacy in 1939, A.W. Klieforth, the American consul general in , sent a secret telegram to the  Department of State explaining Pope Pius’ attitude towards Nazism in .


The new pope “opposed unalterably every compromise with National Socialism,” Klieforth wrote, after a private chat with the pontiff in the . The two men had got to know each other during Archbishop Pacelli’s 12 years as nuncio in .

Pope Pius, explained Klieforth, “regarded Hitler not only as an untrustworthy scoundrel but as a fundamentally wicked person,” and “did not believe Hitler capable of moderation.” Hence he “fully supported the German bishops in their anti-Nazi stand.”


Krupp describes the reputation of the wartime pope as both glowing and intact until 1963, when German writer Rolf Hochhuth penned his play “The Deputy.” It portrayed Pope Pius as a hypocrite who remained silent about Jewish persecution.


The Pave the Way website carries evidence from a former high-ranking KGB officer, Ion MihaiPacepa, who claims that the tarnishing of the pope’s reputation was a Soviet plot.

Krupp explains how the Communists wanted to “discredit the pope after his death, to destroy the reputation of the Catholic Church and, more significantly to us, to isolate the Jews from the Catholics. It succeeded very well in all three areas.”


But he says he also firmly believes that a fundamental revision of Pope Pius’ wartime record is now well under way.


“The dam is cracking now, without question,” he says.

Ironically, perhaps, Krupp says he meets more resistance when he speaks at Catholic parishes than in Jewish synagogues. “Many Jews,” he explains, “have been extremely grateful, saying, ‘I’m very happy to hear that. I never wanted to believe this about him,’ especially those of us who knew him, who were old enough to know him.”