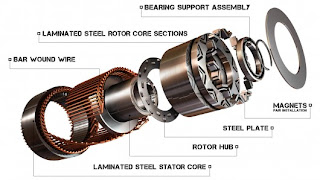 Take a look at the new power plant that GM is making for the oncoming electric car revolution.  It should be blindingly obvious that the days of the automobile mechanic are seriously numbered.  There will still be some level of maintenance but it is surely a fraction of what has been demanded historically.

With mass production underway in China for an electric with a 180 mile effective range, the foot dragging is truly over and we now begin a race for range and market share in a completely new world of consumer automobile products.

Expect to be able to buy a satisfactory product in the 2013 model and to have an excellent long range product readily available for the 2015 models.  By then, other sales will begin to seriously fall and full conversion will be reality by 2020.

General Motors will become the first American automotive manufacturer to build its own electric motors when production begins in White Marsh, , in late 2012. In promoting this capability, GM has released details of the first motor to be built there, the 85 kW (114 hp) permanent magnet motor to be used in the 2013 ChevroletSpark EV.

GM is focused on the development of permanent magnet and induction motors for a variety of applications, and the White Marsh facility will produce such motors for the Spark and other, as-yet-unnamed future vehicles.
Posted by arclein at 12:01 AM