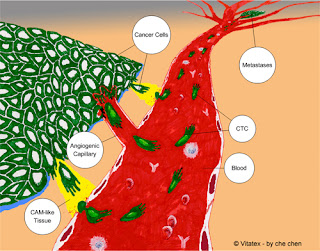 This is another promising discovery in the field of cancer research.  It will be asking way too much to actually block metastasis with a simple drug or we might have long since stumbled over it.  Yet we now understand a key element in the process that looks like it can be intercepted.

At least we now understand this process which has been inevitable but inexplicable to date.  We can eliminate the majority of cancer through surgical intervention but that has normally never stopped the process. Now we can investigate options that do just that.

Again it is early days but it is an important discovery.

Newswise — PHILADELPHIA — Scientists at Dalhousie University in Nova Scotia have identified a key mechanism of metastasis that could lead to blocking tumor growth if their findings are confirmed.

In a recent issue of Cancer Research, a journal of the American Association for Cancer Research, lead researcher David Waisman, Ph.D., professor in the Departments of Biochemistry and Molecular Biology and Pathology, and Canada Research Chair in Cancer Research at Dalhousie University, detailed the key role the macrophage cell surface protein S100A10 plays in allowing macrophages to move to the site of tumor growth – a process that is essential to tumor development.

Waisman said the findings are an example of the complicated biology of cancer.

“We used to think that the only cells that mattered in a tumor were the cancer cells, and that’s it, but now we are beginning to see that other cells must collaborate with cancer cells to drive tumor growth and permit an evolution of the cancer cells into metastatic cells. This change is what causes poor prognosis and ultimately what kills the patient,” he said.

Waisman and colleagues discovered that tumors will not grow without macrophage assistance. These macrophages must come from the blood or from other locations in the tissues. How they are able to move through the tissues or from the blood supply into the tumor had always been a mystery.

Theoretically, blocking either the macrophages or S100A10 chemically could slow, or even stop, tumor growth.

“We found that the protein, S100A10, acts like a pair of scissors on the outside of the macrophages that empowers the macrophages with the ability to chew their way through tissues and enter the tumor site where they release substances that stimulate cancer cell growth and metastatic evolution,” said Waisman.

He said the next step is to figure out exactly how S100A10 functions as a molecular scissor and also to identify pharmaceutical agents that can block the action of S100A10, thereby preventing the movement of macrophages to the tumor site. By understanding exactly how S100A10 works at the molecular level, it may even be possible to design agents which block its activity.

The study was funded by a grant from the Canadian Cancer Society Research Institute and the Canadian Institutes of Health Research.