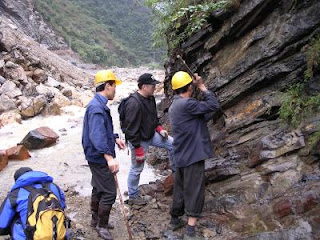 This work narrows it down pretty precisely and pretty well makes the l9inkage to the Siberian Traps bullet proof.  What caused the Traps will remain open for debate and I like to leave open the possibility of an extreme penetration by an iron nickel meteorite.  We do have nickel associated with the upwelling.

Whatever the situation, it is certain that a massive outflow of basalt ensured and the out gassing was large enough to overwhelm nature’s ability to absorb CO2.  It pretty well falls together and I think we can now assume the event itself as the causation of the Permian Extinction without any further controversy.  One really does not look for tigers when you have dead bear lying on the carcass.

It is nice to see dates tightened up like this and welcome.  It even supports a long protracted period of activity that kept things badly suppressed throughout.

It is also an excellent reminder that mankind in the long term needs to provide against any such recurrence.  The risk is not non zero and can be prepared for at least through careful study to assess actual risks.

Researchers pinpoint date and rate of Earth's most extreme extinction

Charles Henderson (middle) of the of collects material from a sedimentary layer in , Province, .

It's well known that Earth's most severe mass extinction occurred about 250 million years ago. What's not well known is the specific time when the extinctions occurred. A team of researchers from North America and have published a paper in Science this week which explicitly provides the date and rate of extinction.

"This is the first paper to provide rates of such massive extinction," says Dr. Charles Henderson, professor in the Department ofGeoscience at the and co-author of the paper: Calibrating the end-Permian mass extinction. "Our information narrows down the possibilities of what triggered the massive extinction and any potential kill mechanism must coincide with this time."

About 95 percent of marine life and 70 percent of terrestrial life became extinct during what is known as the end-Permian, a time when continents were all one land mass called Pangea. The environment ranged from desert to lush forest. Four-limbed vertebrates were becoming diverse and among them were primitive amphibians, reptiles and a group that would, one day, include mammals.

Through the analysis of various types of dating techniques on well-preserved sedimentary sections from South China to Tibet, researchers determined that the mass extinction peaked about 252.28 million years ago and lasted less than 200,000 years, with most of the extinction lasting about 20,000 years.

"These dates are important as it will allow us to understand the physical and biological changes that took place," says . "We do not discuss modern climate change, but obviously global warming is a biodiversity concern today. The geologic record tells us that 'change' happens all the time, and from this great extinction life did recover."

There is ongoing debate over whether the death of both marine and terrestrial life coincided, as well as over kill mechanisms, which may include rapid global warming, hypercapnia (a condition where there is too much CO2 in the blood stream), continental aridity and massive wildfires. The conclusion of this study says extinctions of most marine and terrestrial life took place at the same time. And the trigger, as suggested by these researchers and others, was the massive release of CO2 from volcanic flows known as the Siberian traps, now found in northern .

Henderson's conodont research was integrated with other data to establish the study's findings.Conodonts are extinct, soft-bodied eel-like creatures with numerous tiny teeth that provide critical information on hydrocarbon deposits to global extinctions.