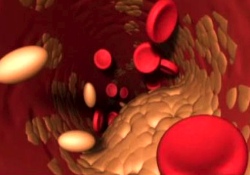 Somehow I think we are headed for an occasional shot to lower bad cholesterol or at least beginning a cholesterol lowering regimen with at least one such shot.

Everything else we use is controversial to begin with and lack convincing science as the effects earned are slow to materialize.  A shot that is clearly effrective will be welcome.

The remaining question, of course, is whether it is safe enough.  That will have to be checked carefully and over some time so it will be quite a while before this is available.

Patients unable to control their cholesterol levels with medications may someday be able to lower their “bad” cholesterol with a shot, according to research presented at the American Heart Association’s Scientific Sessions 2011.

In its first preliminary human tests, the medicine in the new shot lowered low density lipoprotein, or “bad” cholesterol, in healthy volunteers who received the highest dose an average 64 percent more than those who received an inactive placebo injection.


The injected material — targeting a recently-identified cholesterol regulator — is a monoclonal antibody that’s a laboratory-made human protein. Monoclonal antibodies are already used to treat certain cancers and other medical conditions.


In the study, scientists created the monoclonal antibody AMG145 to disable the cholesterol regulator PCSK9, which interferes with the liver’s ability to remove bad cholesterol from the blood. Therefore, turning it off improves cholesterol levels.
“PCSK9 is the first target in lipid metabolism to be inhibited using a monoclonal antibody, and it appears to be a promising way to lower bad cholesterol,” said Clapton Dias, Ph.D., lead researcher and medical sciences director of clinical pharmacology and early development at Amgen, Inc., in Thousand Oaks, Ca.


The study involved 54 men and two women, 18 to 45 years old, who were healthy and not taking other medications. Participants received a single injection that contained one of five doses of AMG145 or a placebo. Sixteen received the injections intravenously and the others got simple injections that delivered the drug just underneath the skin.


After the injections, bad cholesterol was measured frequently for 85-113 days, along with other laboratory measures related to heart disease.


Less of the active form of PCSK9;

No effect on triglycerides, high density lipoprotein (“good” cholesterol) or a protein associated with good cholesterol — all lipid measures were not influenced by the PCSK9 regulator.


The injections were tolerated well, with volunteers receiving AMG145 experiencing no more side effects than those receiving the placebo.

The study included a small number of participants, and they were healthy. So the company is conducting a similar study that gives multiple doses of AMG145 to adults who take statin medication to control their cholesterol.


If AMG145 proves safe and effective in further clinical trials, it could help people unable to control their cholesterol with current medications that work in different ways.

(HealthDay News) — A single dose of AMG145 lowers low-density lipoprotein-cholesterol (LDL-C), total cholesterol, apolipoprotein (apo)-B levels, and suppresses unbound pro-protein convertase subtilisin/kexin type 9 (PCSK9), according to a study presented at the American Heart Association's Scientific Sessions 2011, held from Nov. 12 to 16 in Orlando, Fla.
Clapton Dias, Ph.D., from Amgen Inc. in Thousand Oaks, Calif., and colleagues investigated whether AMG145 lowered circulating LDL-C levels. Healthy individuals, aged 18 to 45 years, with LDL-C ranging from 100 to 190 mg/dL, body mass index within 18 to 32 kg/m², and no co-medications 14 days before inclusion were randomized to receive either AMG145 or placebo. Five cohorts received subcutaneous doses and two cohorts received intravenous doses. The primary end point was the measurement of safety and tolerability after a single dose.
The investigators found that, compared to placebo, a single AMG145 dose lowered the mean LDL-C by up to 64 percent. The extent to which LDL-C was lowered, time to nadir, and duration of LDL-C lowering each had a dose-dependent relationship. AMG145 also lowered total cholesterol and apo-B. Serum triglycerides, high-density lipoprotein-cholesterol and apo-A1 were not affected by AMG145. Serum unbound PCSK9 was potently suppressed by AMG145, and this dose-response decrease correlated well with the decreases in LDL-C, total cholesterol, and apo-B. Treatment-emergent adverse event incidence was similar between patients treated with AMG145 or placebo, with no AMG145 dose correlation. There were no serious adverse events or study discontinuations due to an adverse event.
"AMG145 decreased unbound PCSK9 levels and lowered circulating LDL-C, total cholesterol, and apo-B," the authors write.
All of the study authors disclosed financial relationships with Amgen Inc., manufacturer of AMG145.