Ark of the Yellow Emperor 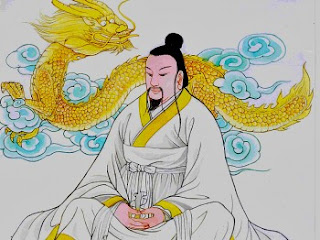 I have already posted at length on the physical reality underlying the story of Noah which appears to be a report on the establishment of Bronze Age agriculture in the .

I surmised a much earlier date but the date that fits best is around five thousand years ago.  I avoid a lot of slow plodding development by doing that.

Now I am looking here at a report on the Yellow Emperor who is suddenly informed enough to invent modern agriculture and all the baggage of a working agricultural society in his own lifetime.  No where does he actually take credit for any of it.  Even more important, he is rewarded along with a bunch of his close associates with a pleasant exit as uncanny as Noah’s landing in the

Yet the nature of Chinese writing goes a long way to preserving this text in its original sense, unlike that of Noah.  One had to have specific insight to understand the import of the Noah story while this plainly spells it out.

The Yellow emperor trained ten thousand to carry on.  That was a town and large farming district by itself.

We can safely presume that this colonizing activity was carried on in a number of locales world wide around five thousand years ago.  We know specifically of the Mesopotamian foundation and the foundation.  It is safe to presume we will eventually understand similar foundations in ,Amazonia,,, and the at least.

I had accepted early agriculture as having it origins world wide at around six specific locales around ten thousand years ago.  Plausibly it did but this did not lead to any form of significant urbanization that was any thing other than naturally stagnant.  The real global eruption came with the advent of a Bronze Age tool kit and the natural need for sea borne trade.

Having a kick start on metals would make sound sense.

Way more important, we can pinpoint the date of this global launch from the twenty sixth century BC and this also gives us a prospective live date for Noah’s life.  Observe the unusual lifespan of Yellow Emperor!  It is claimed that from the landing, that Noah and his immediate family all lived for most of five centuries.  At this point, the supply of joy juice obviously ran out and lifespans collapse.  This takes us nicely to around 2000 BC and well into the global Bronze Age.  The remaining biblical chronology does dovetail into the next thousand years rather handily until we come to the establishment of before the turn of the next millennia.

What this leaves out is the issue of whose agricultural beginnings date two thousand years earlier.  The long lives of Noah’s predecessors make short work of all that and is even supported by the amazing apparent stability of that civilization.

All this speculation is merely raising way more questions than can be answered and would need way more data than we will ever have.  It is still good fun at least.  Rewrite the Noah story by replacing the word with Yellow Dragon and we have the same story.

The Bronze Age began around five thousand years ago and swiftly opened sea transport and global trade.  The dominant power then was Atlantean civilization which was a palace organized trade factory system not unlike the early European advent in .

After Shen Nong the Yellow Emperor took responsibility for keeping stability for the whole territory. He led people to settle in the and changed their way of life from hunting to building houses, raising livestock, and planting crops.

During the Yellow Emperor’s reign, society was stable and culture was enriched. There were many inventions including boats, wagons, weapons, written language, music, the calendar, clothes, medicine, arithmetic, pottery, silk production, the compass, and royal dwellings. Chinese people regard the time of the Yellow Emperor as the foundation of Chinese civilization. The several emperors following the Yellow Emperor, such as , Shun, Yu, and Tang were all his descendants.

According to legend, after successfully achieving enlightenment, he governed his state while also practicing alchemy and meditation. In 2598 B.C., the Yellow Emperor cast a large tripod at the foot of . As soon as the tripod was cast, Heaven opened, and the Yellow Dragon came down from Heaven to welcome him. At the time, the Yellow Emperor rode on the Yellow Dragon together with more than seventy officials—they rose up to heaven in broad daylight, having successfully achieved enlightenment.

The legend was told from generation to generation and Chinese people came to believe that at the end of a successful life, a person will rise up to Heaven. In this way, they believed their ancestors also returned to Heaven and were taken good care of. That is why the Chinese worship their ancestors at special events or festivals and in some cases they build ancestral shrines to worship together. "Respectful worship" of ancestors became a major feature of Chinese culture.