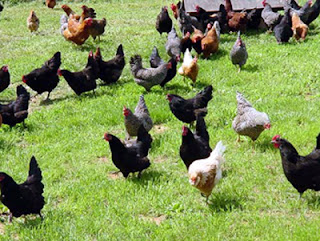 This is a report from the front lines of agriculture were it is shown that the two desired outcomes are naturally in conflict.

I actually think that raising animals on organic feed stocks to be presently impractical.  We forget that one of the purposes of animal husbandry is to convert plant surpluses unsuitable for human consumption into food.

What I do support is the steady development of range raised animals of all types.  It is simply better for the animals and product quality is far better.

In this case range raised chickens win out and I think they really should.  I really do not think they should need more effort or feed for that matter.

I also have long supported the need for grower’s combines in order to manage supply and pricing control.  This removes outright dependence on been a price taker independent of his neighbor.  This has occasionally been mandated by government but would be better handled by local groups at least.

After all the egg producers coop of the Fraser Valley can talk directly to Safeway and enter into a long term contract and know they will sell a certain tonnage every year.  Guess what?  The buyer really does not have time to deal with an individual.  Yet it never made sense to allow the selling to fall by default into a third party.

Pasture-raised or organic: Why we can’t do both

My partner and I raise chickens for meat and eggs on 55 acres -- a small farm by today's standards. Along the way, I've had to make many tough decisions, be inventive, develop relationships with our customers, and work a lot of 14-hour days to insure our farm's progress.

The work is hands-on. I spend most of the day out in the pastures collecting eggs by hand, replenishing the birds' food and water, building coops and shade houses, and managing compost piles. I'm proud of what we do -- but I can't afford to give the birds organic feed.

While certified organic feed is desirable, many chickens are fed organic grains but are still raised in confined quarters. And, when faced with the choice, I believe that treating animals well -- and giving them the freedom to walk and roam around, and enjoy their natural behaviors and habitats -- is the most important piece of the puzzle. Organic grains will not alleviate the inhumane conditions of overcrowded barns, poor housing, poor water quality, or lack of access to fresh pastures and forage (nor the diseases associated with those conditions).


Why do we have to choose? The answer -- as is often the case in farming -- is cash flow.

The cost of conventional grain has risen 30 percent since the beginning of 2011. This is a considerable increase, since we already spend over $8,000 a month on feed. By our calculations, organic feed would cost as much as 75 percent more. In short, it's financially impossible. If we passed the cost on to our customers (a step that would result in our birds retailing at over $35 apiece), we'd be priced out of the market.

My partner and I have spent considerable time discussing what to feed our chickens. And while conventionally grown feed is produced in ways that we don't agree with, small-scale pastured chicken farming is already expensive. The farm fronts all the costs of purchasing and caring for both the laying hens and meat birds -- and in the case of layers, we need to make a six-month commitment before we ever collect an egg to sell. When it comes to the meat birds, even after the 10 weeks it takes to raise them, we still have the costs of transporting them to the processor, slaughtering and packaging, and finally, transporting them to market. And because we're small, we receive no discounts on feed or slaughter costs. And because we've focused mainly on chickens, we don't sell an array of other products to offset our expenses.

By far the most daunting cost on our farm is the chickens' feed. After researching our options, we chose to buy non-organic feed and do business with a small, owner-operated mill less than an hour away in This mill buys as much grain as they can from growers; and they don't add hormones, antibiotics, or anything synthetic to the grains. What I like about the mill is that I have the opportunity to talk with the people there every time I buy the feed. And that's just as important as ensuring that our customers have the ability to visit the farm and talk directly to us as their farmers.

I don't buy grain from sources where I cannot speak to a person involved in the growing or milling process. So many of the grains that go into animal feed come from other countries ( has recently become one of the leading producers of the soy used in animal feed, for instance). And I would want to investigate the conditions of their soil, water, and work environments before I invested in markets so far from my own farm.

Although it's far from the current reality, one of the most transformative innovations -- and I believe the most ideal method for grain acquisition -- would be an independent system owned and controlled by local farmers. The grains would have to be grown far from pesticide and herbicide drift and GMO contamination. They could then be sold to a neighboring mill or cooperative. Local animal farmers could access organic grains at an affordable price; producers would have a constant and steady market year round; and communities would benefit from the rebuilding of rural economies. We'd also have transparency and traceability, straight from the field, to the mill, to the animals.

Alexis and her partner Eric run Soul Food Farm, a 55-acre chicken and egg farm in . They started the farm around 2004 with their daughters Emma and Morgan, and their son Justin. For more about their history and philosophy, see their website.

I suppose I see it more as the quandry facing monoculture and cheap food being taken for granted. Cornish crosses are raised to supply the stores with those plump chickens. They suck at foraging and are quite delicate health-wise in comparison.

There are those applying techniques to raise several different types of livestock. One farm near us goes as far as even raising all of the feedstock. They utilize to their advantage the fact that the different species prefer different forages.

Such a set up is investment heavy. They have the good fortune that the family farm already had much of the needed equipment, facilities, and space. Those just starting out.. it can be a pricetag too daunting to accomplish. (Or in order to accomplish it.. years of building up to such levels.)