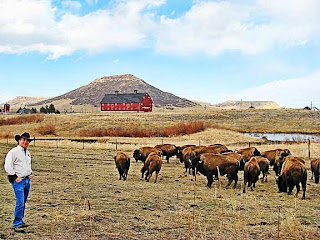 It is always good to listen to insightful, hands on operators on any agricultural protocol.

Here we get the skinny on the clear advantages of raising bison.  I would like to see the original grasslands properly restored as they were much more diverse and richer before they were put to the plow.

I would also like to see them introduced to woodlots throughout the eastern part of .  They are big enough to smash up debris on the ground and to stimulate ground cover while also clearing the lower branches of growing trees.  Deer do a lot of this, but the bison is the heavy mover.

Our Eastern woodlands have never been optimized since the collapse of the Indian populations who did keep clear sight lines open for their own protection.

The bison is well adapted to our outside conditions and in fact prefer just that.  Our cattle however have been bred to prefer winter shelter and have the lighter coats to do that.  It is time we remembered that forest management includes related animal husbandry. 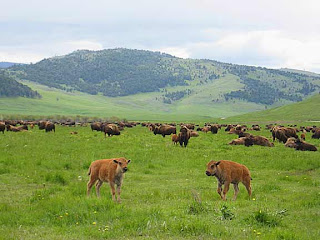 Bison: Sustainability on the Range
By Anna Soref, Contributing Editor

With his western hat, jeans, boots and belt buckle, Dave Carter exudes cowboy. This is a man who knows rodeo, ranching and campfires.

Indeed, when you talk to Carter, you quickly find out he’s all cowboy—well, actually bisonboy. Not only is he the executive director of the National Bison Association, but Carter also owns and ranches bison. His passion for the large furry ruminants runs high, and he’ll talk to anyone who’ll listen about bison’s ability to save an ecosystem and, possibly, the small agricultural farmer.

About 50 million bison once roamed and they were an integral part of the grassland ecosystem. But by the 1890s their numbers had dwindled to 2,000 as a result of slaughter by European settlers. Today, with numbers around half a million, the animals are regaining their foothold and are increasingly ranched and consumed.

Bison’s health advantages over beef are relatively well known. Bison meat contains about half the fat content of corn-fed beef and is rich in omega 3 essential fatty acids. Carnivorous foodies increasingly appreciate the meat whose flavor depends on where it was grown.

Now Carter is on a mission to increase awareness of the bison’s environmental benefits. Bison are essential for the health of the grasslands, Carter says. “The grassland ecosystem has evolved through tens of thousands of years of grazing by large ruminants, primarily bison,” he points out. “If you take those ruminants out of that ecosystem, it collapses.”

Grazing bison help promote a healthy ecosystem with roaming hooves that function as natural tractors, aerating the earth and rotating seeds. Their waste is a potent fertilizer.

“If you take bison off that land, the grass is going to produce about 30 percent more growth than it can decompose; so after a couple of years it just chokes out and dies,” says Carter.

Although bison do emit methane, their grazing helps keep the grass healthy and in turn it absorbs a lot of carbon by putting it back into the soil, according to Carter.

Some bison are grain finished, though most are left to graze until slaughter. Sometimes farmers use corn feed, but it’s usually a blend of grasses and grain, which is more suited to the bison’s digestive system. There are no regulations currently in place to track if a bison has been fed genetically modified corn. “Grass finishing vs. grain finishing will be driven by customer demand,” Carter explains. “The more that consumers demand bison be grass-finished, the more that grass finishing will grow as the predominant finishing protocol by our producers.” Look for “grass-fed” labels on bison to best avoid any GM-corn-fed bison.

Unlike cows, bison are undomesticated and genetically unaltered, which makes for low-maintenance animals. They rarely require antibiotics, and when they do, it’s usually just one animal. They require minimal, if any, winter shelter and prefer to be left alone. Federal law prohibits giving bison growth hormones.

“In their minds, there are still predators out there wanting to eat them and it creates a lot of differences [from cows] that are very positive,” Carter remarks. “Cattle will hang around the watering areas and streams, where they can contaminate water supplies; bison will go down, get a drink and get the heck out.”

In addition to the eco benefits, bison can give small agricultural farmers a chance for success, according to Carter.

“If you are in agriculture and want to raise animals, these days there are two options,” he says. “You can be part of a huge capital-intensive farm that raises a generic commodity with chemicals and genetically modified feed, and you make money by producing more and more volume

“The other path is to find something that’s more labor intensive and connects directly with consumers—natural meats, one of which is bison. You’re producing a product that’s not high volume but high quality; it’s about connecting with customers who appreciate that quality and see the value. Yes, it takes longer to produce bison and there will always be some extra cost, but there’s extra value—this is meat that tastes great, is healthy, and is healthy for the environment.”

For farmers just starting out who want an alternative to large ag outfits, bison provide one opportunity. “You don’t need combines and big tractors; you buy some land, get some animals, put up a fence and you’re good to go,” says Carter. “The last thing these animals want to do is go into a barn.”

Carter spends a lot of his time visiting rural communities and stock shows explaining to students and young farmers the benefits of farming bison and the growing market for their meat. Consumer sales for bison are in their sixth year of double-digit growth, with 2010 numbers showing 11 percent growth.

“In recent years farmers have been taking any land they can and piling it up with corn because of all the incentives for ethanol and what not. I’m explaining the incentives to young farmers about bison so that we can keep that land in pasture, and keep the animals out there that contribute to a healthy environment,” Carter concludes.
Posted by arclein at 12:01 AM