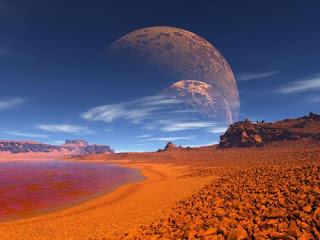 What makes even more sense is that we had two Jupiter sized planets working in similar orbits accumulating mass.  This configuration is naturally unstable, but may well persevere until Jupiter dominated by topping off in mass and began ejecting new planets into the inner solar system.  This planet was too large to fall into a stable orbit with the Jupiter Sol binary and eventually was driven out of the system allowing the remaining planets to settle into dynamically stable orbits.  This planet may well have helped Jupiter grow by disturbing mass into Jupiter’s orbit.

This work confirms the dynamic need for such an object.  It is worth observing that a natural planet formed from the dust clouds of the early solar system are all gas giants.  Rocky planets such as the handful we observe in the inner solar system are formed by outright ejection from Jupiter itself as it becomes too large to remain dynamically stable.  That Jupiter was at the dynamic edge was confirmed by theoretical work published some fifty years ago and largely ignored.

The existence of two proto Jupiters is naturally dynamically unstable as it is dominated by the third order Pythagorean metric which is divergent and would inevitably tend to send one out on a natural hypotenuse.

I have posted in the past that the inner solar system is produced by ejection from Jupiter and that Venus may well have been deliberately produced recently in order to provide a back up habitat for life in this solar system.  Conforming to that hypothesis is the high surface rock temperature on Venus and the red spot scar on Jupiter.  It would have been triggered by simply precipitating a bombardment of Jupiter with material from the Kuiper Belt by a technically capable civilization (who also ended out Ice Age with the same means).

ScienceDaily (Nov. 10, 2011) — Just as an expert chess player sacrifices a piece to protect the queen, the solar system may have given up a giant planet and spared Earth, according to an article recently published in The Astrophysical Journal Letters.

"We have all sorts of clues about the early evolution of the solar system," says author Dr. David Nesvorny of the Southwest Research Institute. "They come from the analysis of the trans-Neptunian population of small bodies known as the Kuiper Belt, and from the lunar cratering record."

These clues suggest that the orbits of giant planets were affected by a dynamical instability when the solar system was only about 600 million years old. As a result, the giant planets and smaller bodies scattered away from each other.

Some small bodies moved into the Kuiper Belt and others traveled inward, producing impacts on the terrestrial planets and the Moon. The giant planets moved as well. Jupiter, for example, scattered most small bodies outward and moved inward.

This scenario presents a problem, however. Slow changes in Jupiter's orbit, such as the ones expected from interaction with small bodies, would have conveyed too much momentum to the orbits of the terrestrial planets. Stirring up or disrupting the inner solar system and possibly causing Earth to collide with Mars or Venus.

"Colleagues suggested a clever way around this problem," says Nesvorny. "They proposed that Jupiter's orbit quickly changed when Jupiter scattered off of Uranus or Neptune during the dynamical instability in the outer solar system." The "jumping-Jupiter" theory, as it is known, is less harmful to the inner solar system, because the orbital coupling between the terrestrial planets and Jupiter is weak if Jupiter jumps.

Nesvorny conducted thousands of computer simulations of the early solar system to test the jumping-Jupiter theory. He found that, as hoped for, Jupiter did in fact jump by scattering from Uranus or Neptune. When it jumped, however, Uranus or Neptune was knocked out of the solar system. "Something was clearly wrong," he says.

Motivated by these results, Nesvorny wondered whether the early solar system could have had five giant planets instead of four. By running the simulations with an additional giant planet with mass similar to that of Uranus or Neptune, things suddenly fell in place. One planet was ejected from the solar system by Jupiter, leaving four giant planets behind, and Jupiter jumped, leaving the terrestrial planets undisturbed.

"The possibility that the solar system had more than four giant planets initially, and ejected some, appears to be conceivable in view of the recent discovery of a large number of free-floating planets in interstellar space, indicating the planet ejection process could be a common occurrence," says Nesvorny.