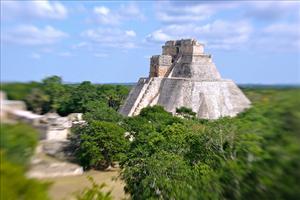 Since we are coming up on 2012 and the end of the Mayan long cycle, we are bound to be subjected to end of the world profiteers, if not prophets and other story tellers.  Of course, no such tradition actually existed in the form we understand it from our own traditions and we can discount any such claims.

In the meantime we will catch a few stories drawing our attention to the Mayan world which we have nicely rediscovered during the past three decades and as beautifully recreated in the cinema since.

A year from now, we can count on the press to feet us all sorts of stories on this topic.

BUT SOME EXPERTS SAY: DON'T WORRY ABOUT IT
By Mary Papenfuss,  Newser Staff

(NEWSER) – The bad news is that Mayan ruins make not one but two apparent references to a possible apocalypse in 2012. The good news—maybe—is that Mexican archeologists say not to worry about it. Experts have finally confirmed that a second suspected reference to 2012 was found at the Comalcalco ruin in an inscription that has been safeguarded in storage for years by . An earlier find from the nearby Tortuguero site in the Gulf coast state of named the same apparent date on a stone tablet. The Tortuguero inscription describes some kind of world-ending or world-changing event that is supposed to occur in December 2012 involving Bolon Yokte, a Mayan god linked to both war and creation.

But some experts say translating the Mayan date to 2012 is inaccurate, and officials at Mexico's Institute of Anthropology and History have long said such fears are a Westernized misinterpretation of what happens at the end of a Mayan calendar cycle. "Western messianic thought has twisted the cosmo-vision of ancient civilizations like the Maya," the institute said in a statement yesterday. But concern is running so high that a roundtable of 60 Mayan experts will meet next week at Palenque to "dispel some of the doubts about the end of one era and the beginning of another," the statement a