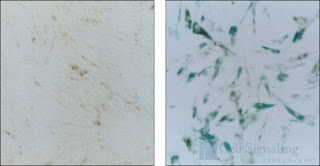 As this review makes clear, it is early days for working therapies that can be used on humans.  However, we now know that removal of senescent cells works to restore prime condition while halting and even reversing normal aging.

This proof of principal which is actually a quite clever bit of experimentation has clearly shown proficiency.  We now must figure our how to actually target the cells we want to eliminate and preferably only those particular cells.  In the meantime, have plenty of vitamin C.

This piece is worth a slow read as it does cover were we are at present and certainly identifies areas of research that will now be invigorated.  The Elixir of the Gods may well be real after all.

Aging bodies become increasingly burdened over time with dysfunctional cells resistant to apoptotic or other clearance. The most well-known of these are so-called "senescent" cells, originally characterized by Leonard Hayflick as mitotic cells that reached growth arrest after a limited replicative lifespan (later associated with telomere attrition) under unphysiological conditions in culture. Later research has revealed that few cells reach a "senescent" state through sheer replicative exhaustion: instead, senescence has emerged as a programmed response to DNA damage or oncogenic stress, and as part of the resolution of wound healing.(1) Unfortunately, the near-term benefits of these functions -- in preventing damaged cells from progressing to cancer, and in preventing fibrosis --are coupled to deleterious long-term consequences, whose effects worsen as the burden of such cells rises with aging. First, the loss of mitotic competence of stem cells denies proliferative tissues of the capacity for renewal. Secondly, the secretory and other phenotypes of such cells progressively derange local and systemic metabolism and tissue function, rendering tissues more vulnerable to metastasis, promoting systemic inflammation, and otherwise impairing tissue function.


To bypass the disruptive effects of the age-related accumulation of senescent cells, some investigators are working on possible ways to manipulate the signaling pathways involved in enforcing the senescent phenotype. This approach bears with it great risks, however, because of the very purposes of senescence to which allusion was made above: returning senescent cells to their normal differentiated function and replicative capacity could lead cells bearing oncogenic mutations to progress into metastatic disease, and aberrant resumption of the wound-healing response leading to fibrosis. The regenerative engineering solution to this dilemma is therefore the ablation of such cells, to eliminate their contribution to age-related loss of homeostasis without reactivating the more acute risks against which the senescence machinery was activated in the first place.


As widely covered in the mainstream press, a successful proof-of-principle study for this rejuvenation biotechnology has now been performed.
There are reasons to believe that the resulting arrest of multiple aspects of tissue aging by removal of p16Ink4a-expressing senescent cells would indeed translate into the tissues of genetically-intact mice -- or humans.


There is therefore good reason to expect that the profound arrest of sarcopenic (muscle wasting due to aging) phenotypes observed in p16Ink4a-senescent cell ablated BubR1H/H "premature aging" mice would translate into the human case.


While less well-known (masked as it is and placed out of focus by the overall age-related body composition shift from lean mass to adiposity), there is none the less significant age-related subcutaneous lipoatrophy in aging, most visibly in the sunken appearance of the face. Part of this is a pathological redistribution of adipose from the subcutaneous to the visceral depot, but it now emerges that the subcutaneous depot becomes qualitative as well as quantitatively abnormal in the degenerative aging process also suffers genuine age-related lipoatrophy and lipodystrophy -- and that p16Ink4a-driven cellular senescence is at the heart of it.


There is significant evidence consistent with a role of cellular senescence in age-related lipodystrophy and lipoatrophy, and for the benefits observed in treated mice in these studies to translate into aging humans. It is unfortunate that the investigators did not assess insulin secretion, insulin action, or systemic inflammation in early-aging BubR1H/H;INK-ATTAC mice, with and without ablation of senescent adipose cells, but reasonable to be optimistic that doing so would yield some normalization of age-related metabolic abnormalities.


There is only the most tentative of evidence suggesting a link between cellular senescence and cataract in "normal" aging. Absence of evidence is, however, not evidence of absence, and certainly the inflammatory secretory profile of senescent cells would, if present, likely accelerate the degenerative course of the disease.


A great deal of evidence has now been amassed that stromal cell senescence plays an important role in laying the groundwork for tumor metastasis, promoting cell proliferation with inflammatory cytokines, encouraging angiogenesis, and degrading the tumor-suppressive action of an intact extracellular matrix.


The investigators boldly, but rightly, conclude that Our proof-of-principle experiments demonstrate that therapeutic interventions to clear senescent cells or block their effects may represent an avenue for treating or delaying age-related diseases and improving healthy human lifespan.


How might the results of this intervention be translated for human rejuvenation therapies?

There is already evidence that senescent cells are targeted by the innate immune system.(24-28) Dr. Judith Campisi, in fact, has found that activating NKG2D receptors on natural killer (NK) cells engage MHC class I chain-related protein A and B (MICA/B) ligands on senescent cells, leading to their NK-induced apopotsis and subsequent clearance.(29) MICA/B ligands are also used to activate tumor cell destruction by NK cells via NKG2G binding, and tummors evolve resistance by several mechanisms to reduce cell-surface MICA abundance;(30) however, the natural selection mechanisms that drive the evolution of such defenses do not apply to growth-arrested cells. Dr. Campisi has found instead that a minority of senescent cells evade destruction by secreting high levels of matrix metalloproteinases (MMPs), which cleave MICA/B ligands and preventing NKG2D binding.(29) This has led to the hypothesis that the great majority of such cells are destroyed over the lifetime by innate immunity, and that the specific senescent cells that do accumulate with aging are precisely those who had variants that allow MMP overexpression, in a kind of "one-off" very temporally-extended kind of selection process. Potentially, a kind of intervention that could overcome this resistance to endogenous clearance mechanisms would allow for the purgation of senescent cells from aging tissues.


SENS Foundation is currently funding work by Dr. Kevin Perrot in Campisi's laboratory, screening compounds for their effectiveness in eliminating cells exhibiting the classical senescence-associated secretory phenotype (SASP)(1) following senescence induced by treatment with 10 gray of ionizing radiation. To date, a screen of the collection of FDA-approved drugs in the Library has identified 400 such agents which have demonstrated effectiveness at lowering secretion of IL-6, a component of SASP whose concentration tends to rise systemically with aging and here used as a preliminary marker of SASP as a phenotype. In particular, Dr. Perrot has recently identified some members of a class of compounds that lower the SASP in irradiated-senescent cells, without reversing growth arrest, and he is currently investigating the mechanisms of this phenomenon.

None of the compounds screened to date have exhibited selective toxicity against senescent (vs. non-irradiated, non-IL-6-secreting) cells. However, the library of compounds available for screening by Dr. Perrott is now expected to expanded substantially, thanks to a research partnership recently established between the Buck Institute and Biotica Technology Ltd to work with their specialized pipeline of novel polyketide compounds, potentially bridging the long-established focus of SENS Foundation and the Campisi lab at the Buck on the role of senescent cells in the degenerative aging process, with Biotica's focus on clinical therapeutics and the wound response and resolution process. Discussions for still other proprietary small-molecule libraries for screening are ongoing.


It is clear that there is substantial distance yet to be traveled. Multiple cell types acquire distinctive "senescent" phenotypes on a cell-type-specific basis, and will require ablation to achieve comprehensive rejuvenation. However, this important proof-of-principle from Dr. van Deursen's laboratory, and the key validation of the scope of the effects of ablation of these particular senescent cells facilitated by his collaboration with the LeBrasseur and Kirkland labs at Mayo, stands as a key landmark in moving toward the removal of their baleful influence on aging tissues. As ever, SENS Foundation is committed to making investments in critical-path research to advance this key but heretofore-neglected line of biomedical research out of the laboratory, into the clinic, and to uniting the multiple strands of rejuvenation biotechnologies into a comprehensive panel for the restoration of the health, vigor, and open futures of aging humanity.