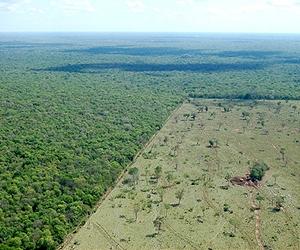 I get rather weary of perfectly good scientists running around the country waving thermometers and drawing conclusions.

Forests are engineered to absorb energy.  We need to get a real handle on the heat equation itself.  This means measuring the parameters of a cell of woodland and a cell of stripped land and even a cell of crop land or any other well defined zone.

When you think of the climate in those terms, a lot of things become easier to address.  To start with wind matters.  A forest blocks of a huge mass of air and naturally insulates the soil from wind blown desiccation.  Grass land does a much poorer job and desert does none at all.

However you cut it, deforestation allows energy to be lost and cooling results.

The worst case of this was the deforestation of the Sahara and the entire during the Bronze Age.  This led directly to a cooler Europe and other significant climatic shifts that included a cooling of the .  This has continued to the present.

Restoration of those forests and appropriate agricultural practices will lead to a warmer and more moderate Europe and a moderation of the climate in the .

Deforestation causes cooling in Northern US and Canada

The researchers calculated that north of , or above 45 degrees latitude, deforestation was associated with an average temperature decrease of 1.5 degrees Fahrenheit.

The impact of deforestation on global warming varies with latitude, according to new research from a team of scientists representing 20 institutions from around the world. The surprising finding, which researchers say calls for new climate-monitoring strategies, will be published in the Nov. 17 issue of the journal Nature.

"It depends where the deforestation is," said UC Davis atmospheric science Professor Kyaw Tha Paw U, a study co-author. "It could have some cooling effects at the regional scale, at higher latitudes, but there's no indication deforestation is cooling lower latitudes, and in fact may actually cause warming."

"Because surface station observations are made in grassy fields with biophysical properties of cleared land, they do not accurately represent the state of climate for 30 percent of the terrestrial surface covered by forests," the study says.

Paw U and his colleagues found that deforestation in the boreal region, north of 45 degrees latitude, results in a net cooling effect. While cutting down trees releases carbon into the atmosphere, it also increases an area's albedo, or reflection of sunlight.

Surface temperatures in open, non-forested, high-latitude areas were cooler because these surfaces reflected the sun's rays, while nearby forested areas absorbed the sun's heat. At night, without the albedo effect, open land continued to cool faster than forests, which force warm turbulent air from aloft to the ground.

"People are debating whether afforestation is a good idea in high latitudes," said Xuhui Lee, the study's principal investigator and professor of meteorology at the Yale School of Forestry and Environmental Studies.

Paw U emphasized that the findings should not be viewed as a "green light" to cut down forests in high latitudes. "The intent is to clarify where we can see these regional effects using actual temperature measurements," he said.

"Besides absorbing carbon dioxide, forest ecosystems have a number of other valuable qualities, even if at certain latitudes they may be warmer than open areas."

The researchers calculated that north of , or above 45 degrees latitude, deforestation was associated with an average temperature decrease of 1.5 degrees Fahrenheit.

On the other hand, deforestation south of , or below 35 degrees latitude, appeared to cause warming. Statistically insignificant cooling occurred between these two latitudes.

The researchers collected temperature data from a network of specialized weather stations in forests ranging from to and compared results with nearby stations situated in open grassy areas that were used as a proxy for deforested land.

"The cooling effect is linear with latitude, so the farther north you go, the cooler you get with deforestation," said Lee.

David Hollinger, a scientist with the USDA Forest Service and study co-author, said, "Another way to look at the results is that the climate cooling benefits of planting forests is compounded as you move toward the tropics."

The study, "Observed Increase in Local Cooling Effect of Deforestation at Higher Latitudes," was supported, in part, by grants from the U.S. Department of Energy and the Yale Climate and Energy Institute. 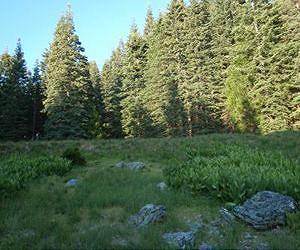 Forests cooler or warmer than open areas depending on latitude

Forests represent one of the most extensive land use types, covering approximately 30 percent of the terrestrial surface.

A study that will be published in Nature on Thursday concludes that forests influence temperature, and their influence largely depends on latitude.

David Hollinger, a plant physiologist with the U.S. Forest Service's Northern Research Station, co-authored the article with principal investigator Xuhui Lee, a professor of meteorology at the Yale School of Forestry and Environmental Studies, and a research team that included 21 scientists from universities and research organizations in the United States, Canada, and Germany.

The study was supported, in part, by grants from the U.S. Department of Energy and the Yale Climate and Energy Institute.

"Forests are complicated ecosystems with subtle climate system effects," Hollinger said. "This study underscores the need to retune climate models to reflect that complexity so we can get a better picture of the role forests play in the landscape."

Results are based on comparisons of air temperature recorded at meteorological towers located in forested areas in the and and, as a proxy for cleared land, nearby surface weather stations operated by the National Weather Service and Environment .

This is largely because year-round night time temperatures in forests remain higher than open areas due to the mixing down of warm air aloft in forests. In addition, snow-covered open areas reflect sunlight while dark forests absorb sunlight and its warmth.

South of 45 degrees, maximum daytime temperatures in forested lands were lower than over nearby open land, but forest nighttime minimum temperatures were still higher.

South of 35 degrees, approximately the southern border of Tennessee, the overall effect was reversed, with forests cooler than open land.

Forests represent one of the most extensive land use types, covering approximately 30 percent of the terrestrial surface.

"This study makes it clear that at least in southern latitudes, there are important climatic benefits for maintaining or increasing forest cover," Hollinger said
Posted by arclein at 12:01 AM