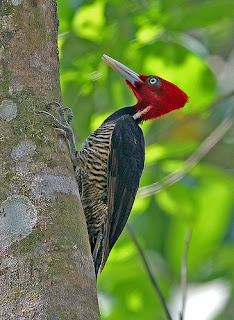 Somehow I suspect this bird is the kissing cousin to the extinct ivory billed woodpecker.  It is surely exploiting similar environments.  It will also make actual renewal very easy as it will be a matter of identifying minor differences in the DNA and having these birds raise the offspring.

The past two centuries saw the extinction of numerous small bird populations.  I anticipate that the next century will see the actual restoration of almost every one of those species in protected refugia.  It will take a lot of effort, but the science is almost there right now.

In the meantime, enjoy watching this piece and the efforts used to simulate their sound.  The device shown can obviously be used in the swamps in the southern to lure in an ivory bill also.