Why These Women and Christ? 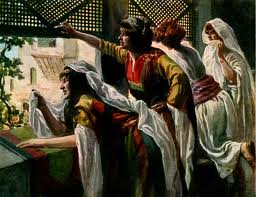 This article asks an amazing question.  Just what in hell were the names of four scandalous women doing in the lead genealogy of Matthew?

I have only leapt over that particular grind forever.  Suddenly we stop and ask just what they were thinking?

I do know however, that a belief in God’s providence can be found in history and seen in that history.

Just the actions of Pope John Paul II who surely was informed by this belief as were his electors and this led directly to the toppling of the Iron Curtain.

Today we witness a brewing turmoil in the Islamic world that we do not understand yet I see rising opportunity for Christianity there in a world which had blocked it out completely.  I just do not want to believe it is possible.  In , the arm wrestle is now between Communism and Christianity and it is deep and wide and almost invisible.  The moment it breaks the emergence will be abrupt.  It is in position to assist the people to throw off the Communist ideology outright.  Again I do not want to believe what I am seeing is true.

The Woman Problem in the Bible: Part One of Four-part series

In the beginning, there was a sex scandal. If the National Enquirerhad been sold on some newsstand in , this would have been the world’s first tabloid headline:  "Eve Tempts Adam:  Bite My Apple." Of course, the first sin had nothing to do with sex ---believe me, it didn’t ---- but that’s what sells newspapers. So as sure as the sun rises, instead of talking about all the splendid things God had just done in Genesis, we would have been talking about "Applegate."

Let’s look at the  four ladies in Matthew’s genealogy who were Jesus’ ancestors.  But I won’t handle it the way it would be handled by a supermarket tabloid.
The genealogy of Jesus found in Matthew's Gospel is often an embarrassment to Lectors. It seems so  boring, as the lector goes on and ONNNN, reciting 14 generations from Abraham to David, 14 more from David to the Babylonian Exile, and 14 more from the Exile to Christ. The names sound like a spell or incantation:

Perez,Amminadab, Rehoboam, Jehoshaphat, Hezekiah, Jechoniah,Shealtiel, Zerubbabel. It’s comical. It is as if a multitude of dwarfs, with strange curly beards and pointed caps, is joined together by their baby-making equipment to form a living Eiffel tower of humanity.

But Matthew’s genealogy is much subtler than you might think. For one thing, contrary to the patriarchal mentality of the time, Matthew has inserted four women into the long list of men— a fascinating innovation.

Matthew’s readers, who knew the Hebrew Scriptures well, must  have been unpleasantly jolted--- embarrassed, even --- at finding Tamar, Rahab, Ruth and Bathsheba on the list.

First Tamar, an apparent Canaanite and apparent prostitute, who apparently seduces her father-in-law and becomes an ancestress of Jesus--- apparently through incest.  I just said “apparently” four times.  I’ll clarify that later.

Second Rahab, who really WAS All That --- a real Canaanite and ---- a real working prostitute.

Third, Ruth, a Moabite.  This was a pagan tribal group the prophets Ezra and Nehemiah forbade the Jewish people to intermarry with because of their treachery.
Fourth, Bathsheba, who became the mistress of King David, and brought on a moral catastrophe which almost destroyed ’s most beloved king.

Instead of covering up Christ's "less acceptable" roots, Matthew highlights them by mentioning these four women --- and these four only. Did we need to know all this?

For thousands of years all human relationships, public and private, were seen in the context of pedigree: ancestors and descendants.

Mary, the mother of Jesus, sees her life this way.  She says,

His mercy is from generation unto generations,
Behold from henceforth all generations shall call me blessed.
As he spoke to our fathers,
To Abraham and to his seed for ever.

She was standing at the point of connection, between all the generations of the past, including Eve, who is the one who famously blew it, and all the generations of the future who would call her blessed.  Why is it important?  Is this going to be a Patriarchal Parable, where all the evil comes from women, starting with Eve?  Or am I going to turn it into a Feminist Folktale, where, as I’m sure you know, it always works out that Women are Nice and Men are Lice?

But if transformation is important, why is this troublesome genealogy important?  For that matter, why is ANY Scripture important?

Is it important because Scripture provides us with a systematic code of moral theology?  No.  Most of the Bible is not moral theology, and it’s anything but systematic.
Is it important because Scripture has stories we can use at to get the kids to behave? No, not even that. Parts of the Bible are not suitable for getting kids to behave: if that were the point, the stories of Tamar, Rahab, Ruth and Bathsheba would not be in there.

Scripture is important for only one reason: because it’s true.  It’s not an “authorized biography” edited by a defense attorney and distributed by a public relations firm. Scripture has not been carefully scrubbed by the Big Man’s campaign manager. It tells what actually happened.  It tells the truth about men, women, families and nations.  It’s history.

Catholic philosophy says that God’s can be found in history.  I find this difficult to believe.  Mind, you, I believe it, but I find it difficult.  It often looks to me like “History is just one damned thing after another.” But the valuable thing about Biblical history is that it’s not a cover-up.  It shows you how it happened, one damned thing after another.  And then it shows you what God did with it.

Jesus was introduced into human history with a mostly-Semitic, 40 century, more-or-less 40 book prequel. The evangelist Matthew recaps the whole 4,000 year story in super-concentrated form via his Genealogy, with its few heroes and its many humbugs, its anointed Prophets and its string of trifling piffle kings.

Surprisingly, just four women are highlighted in the Genealogy, and rather unrepresentative ones at that. If you don’t like the  rather eyebrow-raising selections, your quarrel isn’t with me,  it’s with the authors, Matthew and the Holy Spirit: the ones who decided who made the cut.

It’s that Jesus, God Incarnate, enters into this history and saves it “from within”. He is not a magician who changes things “from outside” with one swish of a magic wand, but the true Redeemer who will rescue and transform every splintered and faltering good thing in the Universe, from the inside, for those who have faith.
Those people in the Genealogies who had “faith,” who were believers, what did they believe in?  They believed in One God, and they believed that his Anointed One was coming to bring a better law, a better triumph, “something better,” as the Epistle to the Hebrews says.

Take a good look at your botched personal past and your compromised personal present, your rickety family legacy, the wince-worthy history of , and the Church, and the World.

The Gospel --- the Good News--- is not that we’re going to be airlifted out of it. It’s that He’s in the middle of it.

The point is that Jesus came in "sinful flesh" inherited from Adam and debased by 4,000 years of genetic decline as Paul states over and over. The Roman /Catholic has Jesus coming in Unsinful flesh contrary to scripture and because He is NOT therefor fully human and divine at the same time he is not linked to us and cannot save us so they have to extend the link to Mary claiming she was born and remained sinless also and then they have to extend the chain link to the saints who can save us with their "merits."
Anyone who clalms that Jesus did not come in the flesh (even if an angel comes and says so) is anathema.
The point is that Satan claims that we can not overcome sin-that God has lied and that Jesus had an unfair advantage by using His Divine nature to overcome sin. But as told in the story of His temptation in the wilderness it was on this exact temptation that Satan tried to get Jesus to fall. Jesus relied on the Same power we can have-A Plain Thus Saith The Lord and reliance on the promises of God. In becoming the Lamb slain from the beginning of the world and becoming fully human He became linked to us in a bond closer than if Adam and Eve had never sinned!

biguser, my friend, I understand your point, and would agree with it, too, if I thought you were quite accurate about the implication of the Immaculate Conception doctrine. But I think you've misinterpreted it, and I ask you to think it through from a differnt angle.
The angel's greeting to Mary (in Greek, "Chaire, Kechaitomene") shows that she was full of grace, which is the 180-degree opposite of being full of sin. Moreover these words are used as a nominative or title, a form of personal address, which is on a par with Jacob being re-named Israel or Simon being tagged Peter: it shows exactly what, in God's eyes, she IS.
This is a paradox which does not at all negate that Christ, the son of Mary, came "in the flesh" -- it shows, rather, that He came in flesh as flesh is supposed to be: flesh as it was in Eden. Real flesh, but not corrupt, sinful flesh: "You will not allow your faithful one to undergo corruption."
I ask you to generously consider the possibility that your view of he Immaculate Conception might need another look.

P.S. I am the author of the article on Jesus' Genealogy cited on this blog.