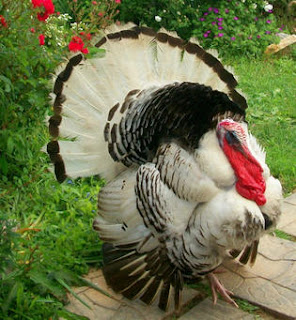 The good news is that heritage turkey breeds are been promoted back from the brink of extinction.  Even better news would be to see wild turkey culture understood and managed to provide an even better product.  The flocks need to be collected in the fall and either wintered over or seriously thinned or both.  They certainly are getting big enough to warrant management.

Perhaps it is time consumers began complaining about or better yet avoiding the super bland version of one’s favorite food.

As I have posted, the trend into industrial farming has long since peaked and the new growth trend is toward outright organic methods and toward localizing food qualities in order to drive premium pricing.  Expect it to emerge as the dominant form of agriculture.

Something to be thankful for: Real turkeys make a comeback

Royal Palm , one of eight varieties considered to be heritage breeds.Photo: Amy Martin PachayIn 1997, The American Livestock Breeds Conservancy (ALBC) took a turkey census. For about half a century, nearly every turkey farm in the had been raising a breed known as the Broad Breasted White. (This cost-efficient, big-breasted bird has a lifespan of only 18 weeks and can neither fly, nor reproduce without artificial insemination). So when the ALBC went looking for other, older breeds of turkey, what they found was startling: They counted only 1,300 turkeys not bred for industrial purposes. In the whole country.

As Emily Anne Vaughn, of Slow Food USA, puts it, the efficiency associated with the new bird “came with a great loss of diversity.”

And, if you’re not old enough to remember a time before the Broad Breasted White, you may be surprised that the ALBC’s website calls turkeys “the quintessential American bird.” Indeed, Benjamin Franklin wanted to designate the turkey—indigenous to North and —as our national symbol instead of the eagle. And for hundreds of years “turkeys were barnyard staples” in the , says Vaughn.  “They’re an easy, abundant source of meat, resilient and self-reliant. It was a no-brainer to have [them] around.”

Fast forward to today, when “they have literally bred all of the turkey out of the turkey,” says Will Harris, owner of White Oak Pastures, the largest USDA-certified organic farm in the state of . Harris raises American Standard Bronze turkeys, one of eight varieties identified by the ALBC as heritage breed turkeys—or birds descended from a continuous gene pool dating back to before the rise of the Broad Breasted White. Heritage birds can still mate naturally, and have a long outdoor lifespan and slow growth rate.  Industrial turkeys, on the other hand, said Harris, “are satisfied to sit in one place and eat and defecate.”

Most turkeys grown in this country are Broad-Breasted WhitesPhoto: Rebecca JamesAt the time of 1997 census, the farmers who still raised heritage turkeys did so because they “had a true passion for them,” said Jennifer Kendall of the ALBC, not because they were profitable; until around 2000, the concept of heritage turkeys was unfamiliar even to more conscious eaters.

So the ALBC teamed up with Slow Food to encourage the growth of the heritage turkey population, by training and supporting heritage turkey farmers, publishing breeding manuals, and raising awareness among consumers to create demand for the birds. “The way to protect these birds is for consumers to buy them and eat them, so breeders will raise more and build up the population,” said Harris. “If nobody cares about them, they’ll go the way of the dinosaur.”

When it comes to turkeys, or any kind of food, the existence of multiple, diverse varieties (i.e. biodiversity) is crucial to food security. “The analogy we like to use is a stock portfolio,” says Alison Martin, also of the ALBC. You wouldn’t want to put all your savings behind one stock, but “essentially that’s what commercial agriculture has done. In a time of global climate change and economic stress, doesn’t it make sense to have options for other production methods?”

That’s the theory behind Slow Food’s Ark of Taste project, “a catalog of over 200 delicious foods in danger of extinction.” The of Taste strives to preserve these endangered edibles (everything from American Whiskey to Amish Pie Squash) both for their unique tastes and for the sake of the biodiversity of our food system. If we don’t, said Vaughn, “we’re going to do ourselves a disservice in terms of what we have access to in the future.”

Heritage turkeys were added to the ark in 2001. And farmers like Harris are crucial to their preservation efforts. His family farmed conventionally until the 1990s, when he “grew tired and disgusted with the excesses of modern industrial farming.” Harris stopped giving his cattle corn, hormones, and antibiotics, and stopped using pesticides and chemical fertilizers. Then he added sheep and poultry to his flock of livestock, realizing it would benefit every aspect of his farm.

“Nature wants a whole smorgasbord of different things out there grazing,” he says.

For eaters, a big draw of heritage turkeys—beyond the knowledge that they’re part of a diverse food system—is their “more rich, succulent” taste, says . Because they’re bred on pasture, as opposed to in cages, heritage birds also have stronger legs, with more thigh meat.

The hard work ALBC, Slow Food , and farmers like Harris have done over the past decade or so has paid off. ALBC did another turkey census in 2006, and found that the breeding population had shot up to 10,000—or nearly ten times what it was in 1997. (ALBC plans to conduct another next census late next year). And heritage turkeys have become popular enough that many farmers sell out well in advance of Thanksgiving; Slow Food has suggestions about where to find them and how to prepare them in their Thanksgiving guide.

If a heritage bird is beyond your budget, but you still want to express your disapproval of factory-farm turkeys, you can sign a petition to boycott Butterball.

Heritage breeds are pricier than your average supermarket turkey—an eight to 12-pound American Standard Bronze from Harris’ White Oak Pastures farmgoes for $75, whereas the average price for a conventionally raised 16-pound turkey this year will be $21.57, according to the American Farm Bureau Federation. Harris acknowledges that he serves a niche, and can’t make his birds available to many of the “big-box shoppers” in his area. “The heritage breeds that I raise are appreciated by consumers who have studied the food production system and made some conscious decisions about what they’re going to eat,” he said. They may also forgo the old one-pound-per-person rule in favor of smaller portions.

“What we can do is create a culture where [foods] are valued and conserved,” Vaughn says, “until the current system, which is unsustainable, is no longer the only game in town.”
Posted by arclein at 12:01 AM

The wild turkey species are making a comeback due to intense efforts of conservation groups.

Sadly sopme do not realize the differences in the wild types.. release domestic strains and that is creating trouble.