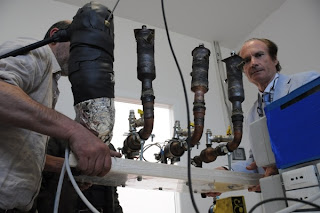 It appears we will get a clear working hypothesis to explain the emergent LENR heat engine.  This should mean a rapid improvement in efficiencies in the reactor as the implied geometries are exploited.

There is plenty of momentum around all this although the mainstream press is still afraid to stick their necks out.

Let us make one thing clear.  It is that surplus energy is been hugely produced in excess of unity.  Understanding how will allow us to properly harness it.  What is no longer in dispute is the surplus energy which is why we have devices boiling plenty of water.

The press should be all over this and they will be quite soon.

Brian Ahern received his PhD in material science from MIT, holds 26 patents and was a senior scientist for 17 years in research and development at USAF Rome Lab at Hanscom Air Force Base. Ahern was the Air Force’s expert on nano-materials. Ahern has discovered the LENR phenomenon is occurring on the nanoscale and involves a formerly misunderstood and rarely explored attribute of nano-magnetism.


Nextbigfuture has been in correspondence with Brian Ahern for a few years. I believe that his work is thorough and precise. I have a lot of unpublished background material on Brian Ahern's research. I will be able to publish part of that on December 7th as well as having full coverage of Brian Ahern's presentation.


This will not be a big reveal of a new major power system. This is a presentation of scientific work which is accumulated understanding of the processes. He has replicated Arata and earlier Piantelli/Rossi work and other systems. Plus his work at Air force research with materials and nanomaterials. Someone interviewed him about his work and a presentation he will be making. He described it and they have maximized the descriptions. I think it is important insights into the science and it is getting towards understanding the processes, but it is not something that is combined with a reveal of breakthrough in power generation at this time. So I know that he is not pulling a Rossi reveal of a power system.

Apparently, energy localization at the nano-scale circumvents the 2nd Law of Thermodynamics. Nature evolved to take advantage of these energy exchange mechanisms available only at this size scale (which is why ordered structures can be created from chaos, such as after the big bang.) This phenomenon was identified in 1996 as Oscillons in relation to Chaos Theory, but has never been clearly understood until now.

Ahern states ” In 1995 we made a major and fundamental discovery regarding nano-material properties. This almost completely unknown to most technologists. All materials processed within certain tolerances experience very different vibrational modes than all other aggregations of matter. It provides a concise explanation for the bioenergetics observed in all aspects of nature.”

Brian explained this to Akito Takahashi working to replicate the LENR experiments of Yashiaki Arata in early 2009 and he succeeded immediately. Ahern has been funded for 2.5 years to replicate Arata and then push on towards Piantelli. Ahern has also been guiding George Miley’s group at UIUC on this nanotechnology, and the group seems to be enjoying a great deal of success in the month on October.


It also appears that the phenomenon may account for and explains a persistent mystery regarding the unification of physics.


Ahern states “In the last 8 weeks I have been astounded by a superior nanotechnology that will capture the imagination of even the greatest foes of LENR. I believe all of LENR is just a new and unanticipated form of nanomagnetism.”

Call me narrow minded,m but as soon as I see the sentence "violates the 2nd law of thermodynamics", I stop reading. Faster than light neutrinos --- possible. 2nd law violated. NO.

A statement like that indicates that the author has no understanding of the subject which he is discussing. Sort of like a religious person claiming that life is evidence of a violation of the 2nd law.