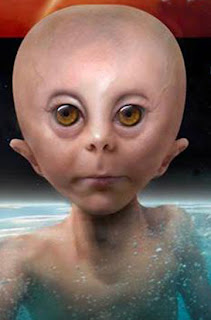 What we get in this recent snippet from Lloyd Pye (buy his recent ebook to review the evidence he trots out even if you do not agree with the conclusions) and we gain a lot of new knowledge addressing the likely rise of humanity as both a hybrid and as a genetically engineered species.  That a mainstream geneticist has chosen Lloyd to release his own conclusions and observations is no particular surprise.  Way too many scholars have way too much invested in what passes as knowledge to allow clearly speculative interpretations any room to grow.  One only has to consider the ongoing shout down around against the real existence of the Sasquatch in the face of around 10,000 first class independent observations.

We get here a primer on mule genetics and see it applied to comparable human primate mule hybrids with convincing implications.  We also see the plausibility of alien human hybridization which would certainly be artificially managed spelled out and the natural fit this makes with what we already know about the starchild skull and the far too rapid emergence of humanity.

I wonder if our non human progenitors like us very much?

At the very end of my new eBook .........is a letter written to me in 1999 from a geneticist who called himself DNA Mystery Man.

(That is not his real nom de plume, which you will see if you read the eBook. Unfortunately, iContact will not send this message with his real non-real name because it has a familiar reference that relates to the word spelled with an s and an e and an x. That word is verboten in mass emails, so you will also see some silly euphemisms for it in the text below. I apologize for this asinine solution, but I have no other way to get this message through such an absurd level of filtering.)

Many who have now read INTERVENTION THEORY ESSENTIALS have been astonished by that letter, as I assumed you would be, and now are asking to know more about that gentleman and the mainstream "secret" he was sharing with me. Let me use this Byte of Pye to make his purpose clearer to those who have read his letter, but also because in it he mentions some fascinating insights about human DNA that also relate importantly to the Starchild Skull research.

I agree with your conclusions [that humans are genetically engineered] and will give you a few hints, if you wish [speaking] as a “DNA ” First, look up the huge discontinuities between humans and the various apes for: (1) Whole mitochondrial DNA; (2) genes for the Rh Factor; (3) and human Y chromosomes, among others.

Regarding #3, I refer you to K.D. Smith’s 1987 study titled “Repeated DNA sequences of the human Y chromosome.” It says “Most human Y chromosome sequences thus far examined do not have homologues [same relative position or structure] on the Y chromosomes of other primates.” Human female X chromosomes do look somewhat apelike, but not the male’s Y.

This means that if humans are a crossbred species, the cross had to be between a female ape-like creature [i.e, “creature of Earth”] and a male being from elsewhere.

There is more to the letter, but these three paragraphs will be the focus for this Byte. The last paragraph is dealt with extensively in the eBook, and has generated much comment among readers because of the story of Zana, an type hominoid that lived in a village in  for 40 years, and which crossbred with human men to produce several dominately human offspring.

In the 1987 study Mystery Man referenced in 1999, the term "most" was used when pointing out that human Y sequences do not match with the Y sequences of higher primates (chief of which are chimps, supposedly the closest genetic relative to humans). However, since then it has been well established that in all chromosome comparisons between chimps and humans, their differences average 2% to 3%. Yet the difference between their Y chromosomes is 30%!

Obviously, something very dramatic happened to the human Y, something that can't possibly be explained by standard Darwinian evolution. The only plausible answer is, in fact, genetic engineering, but we all know mainstream science would, at all costs, avoid openly considering that as a possibility.

Now let's consider Zana. Let's assume, as I do, that she was one of four general types of hominoids, the type dominant in . Let's further assume, as I do, that her type existed with all the others throughout the Miocene Epoch, from 23 million to 5 million years ago. I cover all this in considerable detail inIntervention Theory Essentials, where I support it with ample evidence.

If those assumptions are correct, then she had to have 48 chromosomes, as do all the "higher" primates other than humans, with 24 coming from each parent. Humans have only 46, which means a mating between Zana and a human was "off" by one chromosome, her 24 to her partner's 23. Such a difference in the basic chromosome count can indeed produce hybrid offspring, and the range between chromosomes can even be more extensive, as with mules.

Horses have 64 chromosomes and donkeys have 62. Together they can produce mules, which have 63. All male mules are born sterile, but very rarely female mules will have estrus cycles and can therefore produce offspring with either donkeys or horses. Thus, mule sterility is not universal or absolute. Sometimes the chromosomal material in horses and donkeys can line up exactly "right" to produce fertile offspring.

I think this is what must have happened in the case of Zana and her human partners. In the thousands of times she might have had "candy" in the 40 years she lived in Tkhina, on eight occasions the two chromosome packages lined up exactly "right," and she produced living hybrid offspring (four of whom reached adulthood and were able to produce human families).

I don't pretend to understand how it happened because until we are able to line up an genome with a human genome to compare them, base pair by base pair, nothing about it can be established with any certainty. However, given that do exist in , and hominologists over there search for them as researchers search for bigfoot here, sooner or later one will be found and its DNA will be available to any scientists with the nerve to study them.

This is where we are with the Starchild Skull right now. We are trying hard to obtain the means to secure its entire genome so it can be fully compared with a human genome. When we can finally do that, the many differences between them will produce a percentage of difference that will establish its credentials as a full-on alien rather than the hybrid we thought it was for so long.

This is how science is done....how real science is done....  You keep pushing hard out at the cutting edge, thrashing your way through inevitable mistakes and misinterpretations, never being daunted by them, using them to your advantage, to build on and make headway. And finally you reach a point of knowledge that is incontrovertible and complete, after which you rest, and
Posted by arclein at 12:02 AM