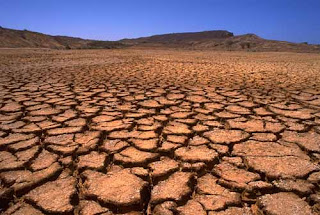 Drought conditions persist throughout the South West and it appears to be part of a decadal cycle we understand poorly.  It is the one reason I would like to see emergence of my previously described machine.  This is any device designed along minimalist lines that directly harvest water from the atmosphere and supply it directly to a drought resistant tree.

It sounds pretty simple, but many crop lands once were well timbered.  This should be restored in some manner or the other. My favorite protocol comes from in which the acacia tree is active during the off season while providing shade and fertilizer.  Something like this surely exists in and the South West.

The secret to all this is that a tree receives and re-expels a lot of water permitting an active hydraulic cycle supplying the rest of the ecosystem.  The Amazon would be largely a desert except for the trees themselves (I am over stating the case to make the point that the trees reload the atmosphere).

All dry lands need intensive tree management in order to optimize moisture availability as a matter of course, but few recognize that or pay much attention to it.

A drought coming to Mexico

’s National Weather Service (SMN) has predicted that a drought afflicting more than half the country will likely last at least three more years. And according to the SMN, the upcoming winter rainfall could range between 20 and 30 percent of normal, especially in the northern, western and central parts of the nation.

Considered by the National Water Commission to be ’s worst drought in 70 years, the dry spell is causing serious problems in the agricultural and ranching economy as well as threatening the viability of rural communities.

Reports suggest that water shortages will leave between 400-500,000 acres of corn unplanted during the fall-winter production cycle in ’s major corn-producing state and the source of about one-fourth of the national production of the crop used to make the emblematic tortilla.

“In the coming months the grain problem will be notable because reservoirs are at one-fourth of their capacity,” said Mexican Senator Francisco Labastida (PRI-Sinaloa).

Weather forecasters also tie the drought to expected hard freezes, which devastated the bulk of the Sinaloa corn crop last winter. Border walls notwithstanding, the US- Mexico borderlands share a common climate and environment, and the SMN’s predictions have special relevance to the side as well.

Adrian Vazquez Galvez, general coordinator for the SMN, cautioned that the combination of scant precipitation and cold weather could trigger a host of economic, environmental and health effects. The winter weather, Vazquez warned, could result in more respiratory, flu and asthma problems, particularly in bigger cities, as well as create favorable conditions for a new round of forest blazes in 2012.

“We have to be ready for the issue of forest fires next year, since there will be combustible material in , , and Zacatecas,” Vazquez said.

In , state government officials warn that as many as 250,000 people-mainly indigenous residents of the Sierra Tarahumara-could be in danger of hunger and starvation because of the failure of small corn plots tilled for self-consumption. On Saturday, November 19, the state government began distributing emergency food packets in the impacted communities, which officials expect will be repaid by community sweat equity in rebuilding roads, clearing fields and repairing schools.

State authorities estimate that about 30 percent of ’s population, or roughly one million people, still depend on agriculture for their livelihoods. Governor Cesar Duarte said that unless the drought-related crisis was solved, more people would migrate to cities in search of charity.

In , debate is simmering over the impacts, real or predicted, of the drought and other climate disasters on the country’s ability to feed itself for an affordable price. Some producers blame the drought for 50 percent price increases in the staple corn and bean crops since late last year. As heads into the 2012 election season, the issue will inevitably become a political one.

Simultaneously, the climate crisis is sowing the seeds for new showdowns over the introduction of genetically-modified crops that are supposed to be more drought-resistant and better yielding. Environmental groups such as Greenpeace and many advocates of sustainable agriculture oppose the transgenic crops on various environmental and health grounds, including the threat posed by genetic contamination of native crops like corn.

Felipe Torres, a researcher with the National Autonomous University’s Economic Research Institute, recently said that production of basic grains could plummet between 30-40 percent because of the pre-existing lack of productive investment aggravated by climate disasters.

In a similar vein, the Food and Agriculture Organization of the United Nations predicted earlier this month that Mexican production of basic grains could be 8.5 percent less in 2011 than last year’s total.

The Calderon administration is challenging doom-and-gloom forecasts. The Secretariat of Agriculture, Livestock, Social Development and Fisheries (SAGARPA) claimed this month that will produce 20 million tons of white corn in 2011, a harvest far greater than the 11 million tons needed for internal consumption. SAGARPA and other federal agencies are promoting various measures to resist the drought and its impacts, including enhanced corn production in wetter states; more efficient irrigation techniques; improved field conditions; insured crops; and greater yielding seeds.

However, skeptics question whether government policies will get to the root of the problem. IvanRestrepo, a seasoned newspaper columnist and prominent environmentalist, was skeptical of government assurances that production will improve and prices hold.

“In summation, it is the modern miracle of multiplying loaves in times of drought,” Restrepo wrote of the Calderon administration’s public posture.