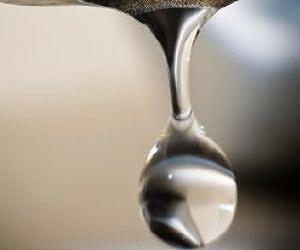 Effectively heat transfer increases at -54 degrees F.  I presume they avoided actual freezing in this experiment and this is a condition never to be seen in nature anyway.

Recall though deep ice used to test life forming models develops strange fractures with apparent liquid in the interstices.  I have never though that water would give up giving anytime soon.  It is meant to drive us crazy.

In the meantime, what I term as biological water does a neat job of slightly changing the physical characteristics of water along a predictable path and will produce fine needle like crystals within one degree of predicted freezing point and is observed in ponds.  I suggest young students make a point of collecting such ice for experimental purposes in science projects.

Weird world of water gets a little weirder

Strange, stranger, strangest! To the weird nature of one of the simplest chemical compounds - the stuff so familiar that even non-scientists know its chemical formula - add another odd twist. Scientists are reporting that good old H2O, when chilled below the freezing point, can shift into a new type of liquid. The report appears in ACS' Journal of Physical Chemistry B.

Pradeep Kumar and H. Eugene Stanley explain that water is one weird substance, exhibiting more than 80 unusual properties, by one count, including some that scientists still struggle to understand. For example, water can exist in all three states of matter (solid, liquid,gas) at the same time.

And the forces at its surface enable insects to walk on water and water to rise up from the roots into the leaves of trees and other plants.

In another strange turn, scientists have proposed that water can go from being one type of liquid into another in a so-called "liquid-liquid" phase transition, but it is impossible to test this with today's laboratory equipment because these things happen so fast.

That's why Kumar and Stanley used computer simulations to check it out.

They found that when they chilled liquid water in their simulation, its propensity to conduct heat decreases, as expected for an ordinary liquid.

But, when they lowered the temperature to about 54 degrees below zero Fahrenheit, the liquid water started to conduct heat even better in the simulation.

Their studies suggest that below this temperature, liquid water undergoes sharp but continuous structural changes whereas the local structure of liquid becomes extremely ordered - very much like ice.

These structural changes in liquid water lead to increase of heat conduction at lower temperatures.

The researchers say that this surprising result supports the idea that water has a liquid-liquid phase transition.