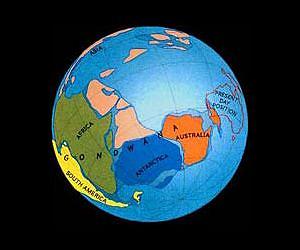 I have good reason to expect chunks of continental crust to be sitting in the and fairly large ones at that.  The region was a submergence zone on the rotational arc that I am most interested in and cultural sources speak of land losses here even if the areal extent was far from continental in size.

That such exist and that they are also deep under water conforms with my expectations.

We obviously need to do a lot more work here.

Australian scientists exploring areas of the said Thursday they had found sunken parts of the megacontinent Gondwana which could offer clues on how the current world was formed.

The two "islands" were found on the remote sea floor in international waters 1,600 kilometres (1,000 miles) west of during a surveying trip last month.

Their rocks contained fossils of creatures found in shallow waters, meaning they were once part of the continent at or above sea level rather than created by undersea volcanic activity, said Sydney University geophysicist Jo Whittaker.

She called it an exciting discovery which would hopefully shed light on how Gondwana broke into present-day , Antarctica and between 80 and 130 million years ago.

Whittaker, one of the key researchers, said she was particularly interested in exploring India's drift first northwest and then sharply north, where its northeast coast, once joined to Australia, smashed into Eurasia, forming the .

"We have a fairly good idea where those continents were but we don't exactly know, the eastern Indian Ocean is one of the more poorly explored parts of the world's oceans in terms of tectonics," she told AFP.

"So it will help us figure out the plate kinematic motions that led to moving away from and heading up off to crash into ."

Samples of sandstone and granite dredged from a steep cliff on one of the islands, about 2,000 metres (6,600 feet) below the ocean surface, are to be dated but the research team believe they are up to one billion years old.

The rocks will also be compared with samples from 's west coast to try to determine where exactly the islands broke away from.

Similar matching was not possible with because the relevant coast was now "smashed into the somewhere," said Whittaker.

's east coast was once adjacent to what is now modern-day Antarctica.

She likened the continental separation to pulling something "a bit gooey" apart and said the fragments, which are a fraction of the thickness of normal continental crust and combined about the size of , were the "little pieces that got left behind."

"These pieces are probably not as thick as (continental crust) so they sit a little bit lower in the water, like something floating in the bath essentially," she said.

Whittaker added that the fossil find was extremely lucky given the vastness of the area they were dredging.

"We're excited to actually get some really good samples and very clear cut continental rocks which show that (the islands) are little fragments of Gondwana that were left behind as India moved away from Australia," she said.

Plate tectonic theory is a relatively young science which was only recognised in the 1950s and experts were still trying to establish what made the continents move and change direction, she added.

was moving northwards at a speed of about seven centimetres (2.75 inches) a year, likely due to a subduction zone along the Indonesian coastline where two plates met that was linked to the destructive 2004 earthquake and tsunami.

Antarctica, on the other hand, was not moving at all and Whittaker said discoveries like the Gondwana islands were critical.

"It's very significant, it's not every day you discover two large continental fragments on the ocean floor," she said.

"Together with some of the other data this has the potential to change how we've been modelling that part of the world and that timeframe."
Posted by arclein at 12:01 AM