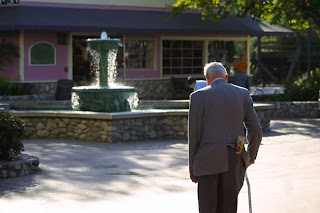 We get the usual story of how this will take years.  Try next year if folks work out the many available pathways and jump on the protocol as they are wont to do.  The huge discovery here is that age related diseases can be halted until you reach the maximum natural lifespan of one hundred.  Now I know how I am going to reach the age of one hundred.  The good news is that this artificial increase is in living one’s life in one’s prime is extended to the last days.  This actually happens in the wild for all creatures in the normal state of nature.

Once this takes hold, pension plans become irrelevant.  Thus you can avoid such schemes if you are presently in you twenties or even a lot older in most cases.  At least make sure there is a good cash out arrangement.

Whatever is said about this it is an excellent new protocol with direct therapeutic impact.  Expect to take an age related series of doses for about one year that is then followed with shorter programs every five years or so.  Also expect to be maintaining an excellent level of safe fitness hereafter.

Removal of specific cells that accumulate with age can delay or prevent the onset of age-related disorders, new research suggests. If adapted for humans, this intervention may represent an avenue for treating or delaying age-related diseases and improving healthy lifespan in humans.

The old adage "Out with the old and in with the new" could help prevent age-related diseases if applied to certain cells, new research on mice suggests.

By removing the body's worn-out cells, called senescent cells, several times during the lifetime of aging-accelerated mice, researchers were able to spare the mice of cataracts,aging skin and muscle loss.

"We started treating animals when they were really young, before they started to establish these senescent cells," study researcher Darren Baker, of the Mayo Clinic College of Medicine in Minnesota, told LiveScience. "As a cell became senescent we would remove it; we saw a really profound effect."

These cells were once important contributors to their cellular community. Eventually cells get old and start showing signs of wear and tear that could lead to cancer, so the body essentially "turns them off." When cells get turned off in mammals (including humans and mice), they can take one of two paths, either dying off or sticking around in a senescent state.

For some reason, the ones that stick around start pumping out odd proteins. These chemical signals have a strange impact on the cells around them, and researchers have speculated that these chemicals can lead to age-related diseases.

The number of senescent cells increases as tissues age; at most they will make up 15 percent of cells in mammalian tissues, the researchers said.

Still, "that small percent is enough to cause major consequences," Baker said. "They start to turn on a variety of genes that are not good and are thought to be detrimental to the overall function of the tissue."

Out with the old

In the new study, the team bred mice to age quickly, getting cataracts, weakened muscles and loss of fat deposits by the time they are 10 months old, when they die of heart disease.

At the mice's 3-week birthdays, the researchers treated them with a drug that would cause their senescent cells to commit suicide, and they repeated this treatment every three days. Compared with the untreated mice that kept all their senescent cells, these drug-treated mice had stronger muscles, fewer cataracts and less wrinkled skin (because their fat deposits in their skin were in better shape).

The researchers also let some of these mice grow up, and didn't start treating them until they were 5 months old. At this point the mice had already developed aging diseases, including cataracts, and were suffering from muscle and fat loss. The scientists weren't able to "undo" the aging that had already occurred, but after repeated treatment to remove the senescent cells, deterioration of the mouse muscles and fat cells stopped.

The mice still had other age-related signs and didn't have an extended lifetime; basically, the drug extended the proportion of "healthy time" in their lives. The researchers said they believe death (and these other aging diseases) is caused through different pathways that aren't affected by these senescent cells.

They are repeating their study on normal mice, without the accelerated aging mutation, but these studies will take years to complete, because normal mice live so much longer (to about 3 years).

Since the study was performed using mice, the researchers still have a long way to go before they reach a human therapy. The senescent cell-clearing technique couldn't be used on humans, since it would require inserting a special gene into human embryos, as was done with mice embryos.

However, Baker said the researchers could use the information they gather from these mouse studies to develop therapies for humans. Gene therapies could be used to target senescent cells, or scientists could use a vaccine to train the human immune system to attack these cells. Such therapies are far in the future, though, and still require lots of basic science to back them up.

The study was published today (Nov. 2) in the journal Nature.
Posted by arclein at 12:01 AM