Polygamy Not Protected by Religious Freedom in Canada 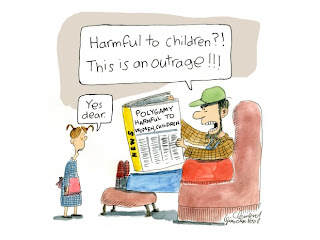 Religious freedom does not protect polygamy nor does it protect your right to kill members not of your faith as demanded by Islam.  Religious freedom is the right to believe what you wish so long as you make no effort to impose any such belief upon another.

In fact, religious freedom is all about freedom from coercion.  Polygamy is only possible when authority imposes such a doctrine on the young and ignorant as is obvious from a naïve review of the system.

Because of this case, is on the road to clarifying the law and the relationship to society of polygamy and possibly finalizing the situation.  It need to be done this way so we never have to revisit it every generation and with every fashion.

Hopefully this will open the door to a similar resolution in the and elsewhere so that this practice can be stamped out.

I have never seen a convincing argument for a benefit and I think that in cultures accepting polygamy that the women need to become the actual landowners and only ones allowed to do banking against land and homes.  Otherwise it becomes impossible to conduct creditable banking along western lines.  Anyway, that is my solution to the economic problem created by this practice.

VANCOUVER - The harms that polygamy inflicts on women and children outweigh any claims to religious freedom, a B.C. judge said Wednesday in a landmark case that is almost certainly destined for the Supreme Court of Canada.

Chief Justice Robert Bauman of the B.C. Supreme Court concluded 's 121-year-old polygamy law is valid as long as it isn't used to prosecute child brides, and he suggests it should be interpreted that way.

"This case is essentially about harm. ... This includes harm to women, to children, to society and to the institution of monogamous marriage," wrote Bauman.

"Polygamy's harm to society includes the critical fact that a great many of its individual harms are not specific to any particular religious, cultural or regional context. They can be generalized and expected to occur wherever polygamy exists."

Bauman accepted evidence that polygamy inherently leads to a long list of harms, including physical and sexual abuse, child brides, the subjugation of women, and the expulsion of young men who have no women left to marry.

Bauman's decision isn't binding, although the case is expected to end up at the Supreme Court of Canada, which would have the final say on 's polygamy law.

More than two decades of controversy surrounding the isolated religious commune of , B.C., where residents follow a fundamentalist form of Mormonism that believes polygamy is required to attain the highest level of heaven.

The failed prosecution of two leaders from the community prompted the provincial government to ask Bauman two questions.

First, does the Criminal Code section banning polygamy violate the Charter of Rights and Freedoms? And if not, does the criminal definition of polygamy require evidence of abuse?

To the first question, Bauman said the law does indeed violate the freedom-of-religion rights of residents, but he said the harms to women and children outweigh those rights.

"There can be no alternative to the outright prohibition," wrote Bauman.

"There is no such thing as so-called 'good polygamy.'"

For polygamous marriages involving men and women 18 and over, Bauman said the law covers all such marriages and prosecutors don't need to show evidence of abuse or coercion.

Winston Blackmore and James Oler, who lead separate, divided factions within Bountiful, were each charged in 2009 with one count of practising polygamy.

Those charges were later thrown out after a judge concluded the way the province chose its prosecutors violated the men's rights.

Rather than appeal, the provincial government launched the current constitutional reference case.

The subsequent trial heard from a range of academic experts, former polygamists and current plural wives, focusing almost exclusively on Bountiful and the Fundamentalist Church of Jesus Christ of Latter-Day Saints, or the FLDS, to which the community belongs.

The hearings focused an unprecedented public spotlight on the community of about 1,000 residents, who have been investigated numerous times during the past two decades but have so far avoided prosecution.

Blackmore said last week he hoped the case would conclude the law is unconstitutional and that he and his community will be left alone.

"It would be nice to not have discrimination and persecution from the government," he said in an email to The Canadian Press.

"It would certainly be nice to have the same charter protection as everyone else.''

The FLDS holds polygamy as a tenet of the faith, although the mainstream Mormon church renounced polygamy more than a century ago.

The case heard two months of testimony offering wildly diverging opinions about life in such polygamous communities and the effect of polygamy itself.

The federal and provincial governments, as well as several intervener groups who want the current law upheld, argued polygamy is always harmful.

They said allowing men to marry multiple women will inevitably harm society, as well as the women and children involved in the marriages.

Both Blackmore and Oler were accused of helping transport teen girls to the to be married and of marrying teen girls themselves.

Those allegations prompted the RCMP to launch a renewed criminal investigation, which is still ongoing.

Lawyers for residents and advocates of civil liberties argued the law violates the charter's religious guarantees and rejected the argument that polygamy is inherently bad.

The law is an outdated relic akin to 's long-abandoned ban on homosexuality, they argued, and any alleged crimes can be punished under other laws, such as those prohibiting sexual abuse and human trafficking.