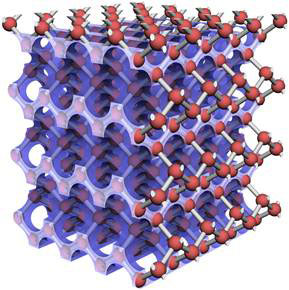 Read this item slowly.  We can now construct a three dimensional matrix in silicon and establish a photonic switching system interlinked with electronic control.  Early days but it is all there to seriously anticipate the production of a fully functional photonic processor fairly quickly and the related jump in productivity.

This is another long anticipated development that is how becoming plausible.

As we all know, in technology, once possible it soon becomes reality as the structures are figured out.  The trick has always been fabrication and this is another such leap forward.

Optical computer now a step closer Researchers from the FOM Foundation, the MESA+ Institute at the University of Twente, Philips and ASML have designed a completely new method for manufacturing 3D structures in silicon, which function as a semiconductor for light. They publish their results in two leading journals. The use of standard equipment makes the integration in silicon chips possible and that is vitally important for their application in a future optical computer.

One way of making computers far faster still is the production of three-dimensional computer chips. The technology currently used for the manufacture of computer chips is not particularly suitable for the manufacture of three-dimensional spatial structures. The structures on a chip are built up layer by layer, as a result of which the production of an extensive structure is a time-consuming and expensive job. In two recently published articles in the journals 'Advanced Functional Materials' and 'Journal of Vacuum Science and Technology' former FOM researchers Johanna van den Broek, Willem Tjerkstra, Léon Woldering and Willem Vos described with their colleagues how they could make a three-dimensional structure in crystalline silicon that consisted of an orthogonal regular pattern of pores that crossed each other perpendicularly. The pores formed a diamond structure that was found to behave as a semiconductor for light: a photonic crystal 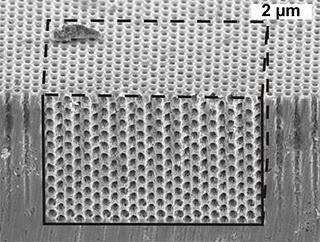 Figure 1- Electron microscope image of a three-dimensional diamond structure in silicon (encircled), consisting of identical pores in an orthogonal pattern that cross each other at an angle of 90º. The upper part of the figure shows the upper surface of the chip, in which a large quantity of pores have been etched. Top left a dust particle can be seen that ended up on the crystal after the process. In the side of the chip an orthogonal pattern of pores has been etched in a single go, perpendicular to the other pores. The scale at the top right is two micrometres, about 50 times as thin as a human hair.

An intriguing analogy exists between crystalline silicon/diamond and the new artificial diamond structure: crystalline silicon and diamond both have a forbidden energy band as a result of which electrons with these energies cannot travel through the crystal (the band gap). This forbidden energy band lies at the heart of how semiconductors work, and it is how current is switched on and off in chips. In an analogous manner the new artificial diamond structure was found to behave as a crystal for light, a 'photonic crystal', and was found to have a forbidden energy band for light. Therefore in theory, photonic crystals reflect almost 100% of light with wavelengths in the forbidden band.

The availability of three-dimensional photonic crystals with a band gap makes it possible to accurately control and even capture photons. The high reflection of the structures can be used to produce a 'cage for light' in a photonic crystal. Inside such a cage the light continues to ‘bounce’ backwards and forwards between the walls of the cage until it can once again escape from it, preferably after a 'push on the button'. This makes it possible to control optical bits instead of electronic bits, so the optical computer has now come a step closer. An optical computer can process far more data simultaneously than a conventional computer. As optical computers contain electronic components as well, it is important that the new manufacturing method is entirely compatible with the methods in the chip industry so that electronic and photonic components can be simply manufactured on a single chip.

More details about the process

The researchers made the three-dimensional nanostructures in two steps using an innovative process. First of all they made use of ASML's advanced deep-UV lithography: with the help of UV light, a gigantic camera projected the orthogonal pore structure on a layer of photoresist. This provided a mask with millions of minute pores. Then using a plasma etching process from the chip industry they etched very deep nano pores in a silicon wafer. 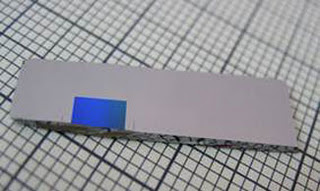 
The second step is crucial: on the thin side of the wafer the researchers applied a second mask with extreme accuracy and they then used a very unconventional method to produce the same pattern of holes in the mask as in the first step. The challenge lay in the requirement that the pattern on the mask could deviate by no more than 30 millionths of a millimetre (30 nanometres) and 0.5º from the optimum position and angle. This was necessary to ensure that the required diamond structure arose after etching. The pattern was applied using standard equipment from the chip industry. The second set of pores was etched in the same manner as the first set. By using standard equipment the electronics and the three-dimensional structures made in this new method can be integrated onto silicon chips.


The pores in the new three-dimensional structure form a diamond structure which is the same as the carbon atoms in the well-known gemstone diamond or the silicon atoms in crystalline silicon.

The new structure has been magnified about 2000 times compared to a diamond crystal. To be certain of their success, the researchers sacrificed a number of their structures by carefully opening these up so that the diamond structure could be accurately analysed for pore depth, pore diameter, pore shape and alignment. This confirmed that the structure formed in the wafer is indeed as shown by the dotted lines in Figure 1.

Optical reflecting measurements like those shown in Figure 4 confirmed that the new diamond structures behave as very good photonic crystals. The roughness of the surface and the thickness of the crystal currently limit the maximum reflectivity. The broad forbidden bands are found at infrared wavelengths which are used in the telecommunication industry (1330 and 1550 nm).

Three dimensional photonic band gap crystals with a cubic diamond-like symmetry are fabricated. These so-called inverse-woodpile nanostructures consist of two perpendicular sets of pores in single-crystal silicon wafers and are made by means of complementary metal oxide–semiconductor (CMOS)-compatible methods. Both sets of pores have high aspect ratios and are made by deep reactive-ion etching. The mask for the first set of pores is defined in chromium by means of deep UV scan-and-step technology. The mask for the second set of pores is patterned using an ion beam and carefully placed at an angle of 90° with an alignment precision of better than 30 nm. are made with pore radii between 135–186 nm with lattice parameters a = 686 and c = 488 nm such that a/c = √2; hence the structure is cubic. The crystals are characterized using scanning electron microscopy and X-ray diffraction. By milling away slices of crystal, the pores are analyzed in detail in both directions regarding depth, radius, tapering, shape, and alignment. Using optical reflectivity it is demonstrated that the crystals have broad reflectivity peaks in the near-infrared frequency range, which includes the telecommunication range. The strong reflectivity confirms the high quality of the photonic crystals. Furthermore the width of the reflectivity peaks agrees well with gaps in calculated photonic band structures.
Posted by arclein at 12:01 AM