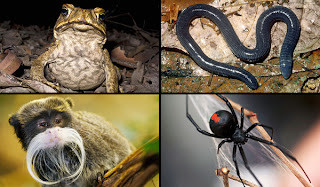 Mother Nature seems to accept just about any sort of protocol to ensure species survival and including
cannibalism as part of the tool kit makes total sense in these obscure examples.  Our preoccupation with cannibalism is more of an historical obsession with persistent ancient tales of human cannibalism that appears to exist universally throughout the human condition.

Human cannibalism as a part of the human tribal economy makes just about no sense because we are long lived and slow in reproduction.  It makes some sense as a possible victory party fare once every couple of years and that the idea may have carried over into scant occasions during the Aztec reign.  However it occurred if it ever occurred, it was a rare ritualized event able to intimidate one’s enemies.

Thus informed, it is clearly used in situations among animals that use mass production strategies or other high risk methods that make the male at least surplus and a ready source of much needed protein.

And sometimes you stumble into a completely unexpected adaptation such as the cane toad.

A Toad-Eat-Toad World,’ and Other Tales of Animal Cannibals

Midsize cane toads lure younger cane toads, which the bigger toads then swallow whole. A mother caecilian, top right, stays by her young and literally feeds them herself. Tamarin monkeys don't eat their offspring, except when they do. The female redback spider makes a meal of her mates.

When Richard Shine, a biologist at the of in , first heard the mystery of the missing eggs, he feared it was another case of what might be called invasive toadkill. He and his colleagues were studying the cane toad, Rhinella marina, a big, warty, sludge-colored Latin American amphibian that was brought to the continent years ago in an ill-fated effort at beetle control.

The researchers already knew that many large Australian carnivores like freshwater crocodiles and marsupial quolls had died after naïvely feasting on the highly toxic adult toads. Now it seemed that smaller predators were going after the toad’s equally poisonous eggs, and Dr. Shine worried that they too would be doomed.

Follow-up field studies soon revealed the identity of the caviar thieves. To the researchers’ astonishment, Dr. Shine said, it was cane toads themselves — or rather their tadpoles, which would swim over to each fresh batch of Rhinella eggs and “desperately consume” every slick black spherelet they could find.

Significantly, the tadpoles weren’t simply hungry for a generic omelette. Reporting in the journal Animal Behaviour, Dr. Shine and his co-workers showed that when given a choice between cane toad eggs and the similar-looking egg masses of other frog species, Rhinella tadpoles overwhelmingly picked the cannibal option. Oh, little cane toads lacking legs, how greedily you snack on pre-toads packed in eggs!

Rhinella’s brutal appetite is among a string of recent revelations of what might be called extreme or uncanny cannibalism, when one animal’s determination to feed on its fellows takes such a florid or subversive turn that scientists are left, as Mark Wilkinson of the Natural History Museum in London put it, “gobsmacked” by the sight.

There are males that demand to be cannibalized by their lovers and males that seek to avoid that fate by stopping midcourtship and hammily feigning rigor mortis. There are mother monkeys that act like hipster zombies, greeting unwanted offspring with a ghoulish demand for brains; and there are infant caecilians — limbless, soil-dwelling amphibians — that grow fat by repeatedly skinning their mother alive.

In the past, animal cannibalism was considered accidental or pathological: Walk in on a mother rabbit giving birth, and the shock will prod her to eat her bunnies. Now scientists realize that cannibalism can sometimes make good evolutionary sense, and for each new example they seek to trace the selective forces behind it.

Why do cane toad tadpoles cannibalize eggs? Researchers propose three motives. The practice speeds up maturation; it eliminates future rivals who, given a mother toad’s reproductive cycle, are almost certainly unrelated to you; and it means exploiting an abundant resource that others find toxic but to which you are immune.

“We’re talking about a tropical animal that was relocated to one of the driest places on earth,” Dr. Shine said. “Cannibalism is one of those clever tricks that makes it such a superb colonizer and a survival machine.”

Maydianne Andrade, a biologist at the University of Toronto Scarborough in Ontario, has studied the redback spider, a type of black widow in which males willingly fling themselves onto the fangs of their much bigger mates. Dr. Andrade has found that the self-sacrificial act is simply the grand finale of an elaborate Ringling Brothers courtship performance that can last hours.

The suitor leaps around the web to vibrate its silken strands just so. He vaults up and over the female, back to front, side to side, again and again. He somersaults tantalizingly close to her mouth and then flips himself clear.

Is she ready to mate? She allows the male to mount her and fill one of her paired sperm storage organs, but then, hold on buster, it’s time for more jitterbugging, more lordly leaping. The male dances around her jaws again, she lets him fill sperm receptacle No. 2, his genitals break off to help seal the deal, and that’s it. He somersaults toward her fangs for real, she makes a quick meal of him, and he dies in arachnirvana, his gametes well positioned to sire thousands of next-generation redbacks.

But woe to any suitor that lacks a daredevil stripe. The female will cut short his wan routine, cannibalize him prematurely and then instantly mate with a rival, as if out of spite.

Dr. Andrade said the male redback’s suicidal efforts made sense. Males are the size of rice grains and blown about by the wind, females are spottily distributed and hard to find, and a vast majority of males never encounter a single female. For the lucky few who do, there’s no time to waste: This is their one shot at legacy, and they throw their hearts and parts in her hands.

“It’s what we call a terminal investment,” Dr. Andrade said.

For males with better dating prospects than the redback, the idea of connubial cannibalism may not seem so sexy, and the males do what they can to keep peckish females at bay. Among some species of widow spiders, males are preferentially drawn to females that smell as if they’ve just finished dinner, and hence are less likely to view approaching mate as a meal.

Studying Pisaura mirabilis, a slender, half-inch-long brown garden spider found in , Trine Bilde of and her colleagues have discovered that the males sometimes resort to a particularly melodramatic anticannibalism gambit. A male woos a female with a nuptial gift, a fresh-caught insect neatly bundled in silk and held aloft in his fangs. The female latches onto the gift with her fangs, and if she starts eating it calmly, the male slowly positions himself around her and starts transferring sperm.

If, however, the female grabs the parcel a little too hungrily, the male counters the predatory threat by playing spider possum. “He’s still holding onto the gift, but he stretches himself out into a deathlike pose, completely motionless, with his legs lagging behind,” Dr. Bilde said.

The female starts running around with the gift, the limp male dangling from it. Only when she finally grows tranquil enough to treat her present with care will the male dare to rouse himself back to life and lovemaking.

“This sort of death-feigning behavior has never been observed before in a sexual context,” Dr. Bilde said. “It’s very spectacular to see.”

Another skin-tingling spectacle is the kind of living cannibalism recently identified in two species of caecilians. These limbless tropical amphibians may live in soil and look like worms, but the mothers act like saints. For some three months after her young have hatched, the mother stays by their side, and repeatedly, literally feeds them herself.

Over a three-day period, the outer layer of the female’s skin gradually swells with lipids and turns pale and glisteny. When moment and maternal epidermis are ripe, a half-dozen famished young caecilians surround her, and using rows of temporary, specialized teeth that look like slotted spoons or grappling hooks, they peel her, potato-style, from top to tail. They tug and yank. They fight over hanks.

“Within 10 minutes of fairly frenzied activity, they have peeled all the mother’s skin off,” said Dr. Wilkinson of the , who with his colleagues reported on skin-feeding behavior in the journals Nature and Biology Letters. Mother Caecilia doesn’t seem to mind. Like a lactating Madonna, “she remains placid the whole time,” Dr. Wilkinson said.

Not all mothers are martyrs, of course, and even the good ones may have their monstrous moments. Tamarin monkeys are normally famed for extravagant devotion to their offspring, but in a recent issue of the journal Primates, Laurence Culot, now of São Paulo State University in Brazil, and her colleagues described witnessing a rare case of maternal cannibalism among wild mustached tamarins of Peru.

A mother tamarin holding her infant son was foraging for fruit with her adult daughter. One moment the charming tableau looked fine, baby monkey clinging adorably to mother’s fur. The next, the researchers watched as the mother bit through the baby’s skull and ate out its brain. And once the mother had polished off the entire head, her adult daughter partook of some shoulder.

“I was really, really surprised — it was a totally unexpected thing to see among wild tamarins,” Dr. Culot said. “I couldn’t help thinking, ‘Oh, my God, I forgot my camera!’ ”

The researchers propose that, in a way, the grisly act was an expression of maternal love.

The adult daughter turned out to be pregnant at the time. Tamarin infants are so demanding that rearing them is a group affair, and if the mother’s infant survived, the daughter’s wouldn’t have a chance. Through a shared act of cannibalism, mother and daughter made their pact.
Posted by arclein at 12:01 AM