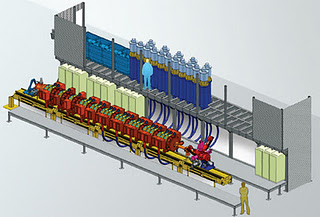 This is all about pure research but one can admire the ingenuity applied in order to provide an extremely heated layer of metal to study.  It also shows us how we inch along in research to keep pushing obvious boundaries.

Remember that we are still mucking with particle physics at masses three to six orders of magnitude greater than the likely mass of its least constituent parts, while convincing ourselves we are learning something fundamental.

This nicely explains the complex procedure used to accomplish the present results and I am sure we will see new physics here.

Berkeley Lab, a partner in the Heavy Ion Fusion Sciences Virtual National Laboratory (HIFS VNL) with Lawrence Livermore and the Princeton Plasma Physics Laboratory, has been a leader in developing a special kind of accelerator for experiments aimed at fusion power, called an induction accelerator. The induction principle is like a string of transformers with two windings, where the accelerator beam itself is the second winding. Induction accelerators can handle ions with suitable kinetic energy at higher currents (many more charged particles in the beam), much more efficiently than RF accelerators.

The NDCX-II accelerator is specifically designed to study warm dense matter. By using an induction accelerator and a neutralized drift compression system, the ion pulse can be shaped to deliver most of its energy to the target surface.

After acceleration in NDCX-II, the ion bunch enters a drift chamber where a plasma (consisting of ions plus numerous free electrons) is injected to neutralize the net charge of the pulse. A magnetic field focuses the bunch radially; meanwhile the induction accelerator has manipulated the ion velocity so that the rear end of the pulse catches up with the front end, compressing it longitudinally. In this way the pulse is shaped to deposit about three million electron volts of kinetic energy per ion, within one nanosecond duration, onto a spot just one millimeter in diameter on a thin foil target.

“A high-energy accelerator, such as RHIC or LHC, would send an particle beam through the target like a bullet through paper, with only a tiny fraction of its energy lost,” says Joe Kwan of AFRD, the principal investigator of NDCX-II. “Our ion beam is optimized to deposit most of its energy in the thin target itself, heating it instantly to warm dense matter conditions.”

Construction of the NDCX-II accelerator began in 2009 and its first phase is expected to be completed early in 2012, when experiments will begin. The field of warm dense matter is an important research discipline in itself, necessary to understand the state of matter inside giant planets like Jupiter, and a variety of other astrophysical phenomena. Although its targets are thin foils, not heavy-hydrogen capsules, NDCX-II will make advances in acceleration, compression, and focusing of an intense ion beam, which will inform driver concepts for heavy-ion fusion energy production.