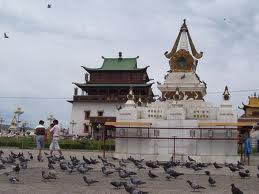 I think the idea is great except that it is surely better to lock out a lagoon that is mostly drained in the fall during low water.  What is left is then allowed to freeze solid and water is then allowed in from the river in small surges to provide another inch or so every few hours.  It will also be easier to keep a flowing pipe open than to use start and stop procedures.  At worst one creates a mountain of ice instead of a nice clear sheet.

Then as spring approaches, the same ice can be covered with a thick mat of sawdust and wood chips and then protected with canvass.  It is thus well insulated.

Recall that in the nineteenth century that winter ice was packed in sawdust and shipped to !

The ice then provides a natural coolant during the summer and can hardly be cheaper.

I cannot think of any place in Canada were it may be worth the trouble to do this ourselves as no none wants to actually haul the ice at all.  or have the river but may not have quite enough of a hard cold to do it all properly.  The prairie cities certainly could use it easily though but then the necessary infrastructure will dissuade.

However in a green field build out like this could work very well.

Mongolia is to launch one of the world's biggest ice-making experiments later this month in an attempt to combat the adverse affects of global warming and the urban heat island effect.

The geoengineering trial, that is being funded by the government, aims to "store" freezing winter temperatures in a giant block of ice that will help to cool and water the city as it slowly melts during the summer.

The scientists behind the 1 bn tugrik (£460,000) project hope the process will reduce energy demand from air conditioners and regulate drinking water and irrigation supplies. If successful, the model could be applied to other cities in the far north.

The project aims to artificially create "naleds" – ultra-thick slabs of ice that occur naturally in far northern climes when rivers or springs push through cracks in the surface to seep outwards during the day and then add an extra layer of ice during the night. Unlike regular ice formation on lakes – which only gets to a metre in thickness before it insulates the water below – naleds continue expanding for as long as there is enough water pressure to penetrate the surface. Many are more than seven metres thick, which means they melt much later than regular ice.

A Mongolian engineering firm ECOS & EMI will try to recreate this process by drilling bore holes into the ice that has started to form on the Tuul river. The water will be discharged across the surface, where it will freeze. This process – effectively adding layers of ice rinks – will be repeated at regular intervals throughout the winter.

The qualities of naleds (also known as Aufeis, German for "ice on top") have been known for hundreds of years. The North Korean military used them to build river crossings for tanks during the winter and has used them as drilling platforms. But engineers usually see them in negative terms as a threat to railways and bridges.

The Anglo–Mongolian company believe their proposed use in could set a positive example that allows northern cities around the world to save on summer air conditioning costs, regulate drinking supplies, and create cool microclimates.

"Everyone is panicking about melting glaciers and icecaps, but nobody has yet found a cheap, environmentally friendly alternative," said Robin Grayson, a Mongolian-based geologist. "If you know how to manipulate them, naled ice shields can repair permafrost and building cool parks in cities." He said the process will work in cities where the summer is intolerably hot and winters have at least a couple of months with temperatures of –5 °C to –20 °C.
Posted by arclein at 12:01 AM