The only thing lost about this not so ancient civilization was the writer’s library card. 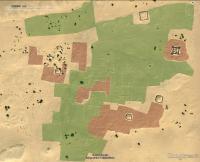 In the event it is a reminder that agriculture is a practical proposition in the the moment the water question is solved and that past societies did solve it. Their loss usually meant that they were simply burned out by marauders who they were unable to check.  These peoples were way to resilient and resourceful to fail in any other manner.

As I have posted in the past, it is time to plant a wall of acacia on the dessert edge and to slowly walk that tree cover inward to bring the humid air into the desert.  It would at least support cattle culture in the immediate term.

The original desert had tree cover and this was stripped out by man and his goats.  Even without artificial means and some neat tricks, it should be possible to at least reforest it all.

This is a photo of mudbrick and stone castle-like structure. Photo by Toby Savage

Satellite imagery has uncovered new evidence of a lost civilization of the Sahara in 's south-western desert wastes that will help re-write the history of the country.

The fall of Gaddafi has opened the way for archaeologists to explore the country's pre-Islamic heritage, so long ignored under his regime.

Using satellites and air-photographs to identify the remains in one of the most inhospitable parts of the desert, a British team has discovered more than 100 fortified farms and villages with castle-like structures and several towns, most dating between AD 1-500.

These "lost cities" were built by a little-known ancient civilization called the Garamantes, whose lifestyle and culture was far more advanced and historically significant than the ancient sources suggested.

The team from the has identified the mud brick remains of the castle-like complexes, with walls still standing up to four metres high, along with traces of dwellings, cairn cemeteries, associated field systems, wells and sophisticated irrigation systems. Follow-up ground survey earlier this year confirmed the pre-Islamic date and remarkable preservation.

This is a satellite image of area of desert with archaeological interpretation of features: fortifications are outlined in black, areas of dwellings are in red and oasis gardens are in green.

It is like someone coming to and suddenly discovering all the medieval castles. These settlements had been unremarked and unrecorded under the Gaddafi regime," says the project leader David Mattingly FBA, Professor of Roman Archaeology at the .

"Satellite imagery has given us the ability to cover a large region. The evidence suggests that the climate has not changed over the years and we can see that this inhospitable landscape with zero rainfall was once very densely built up and cultivated. These are quite exceptional ancient landscapes, both in terms of the range of features and the quality of preservation," says Dr Martin Sterry, also of the University of Leicester, who has been responsible for much of the image analysis and site interpretation.

The findings challenge a view dating back to Roman accounts that the Garamantes consisted of barbaric nomads and troublemakers on the edge of the .

"In fact, they were highly civilised, living in large-scale fortified settlements, predominantly as oasis farmers. It was an organised state with towns and villages, a written language and state of the art technologies. The Garamantes were pioneers in establishing oases and opening up Trans-Saharan trade," Professor Mattingly said.

The professor and his team were forced to evacuate in February when the anti-Gaddafi revolt started, but hope to be able to return to the field as soon as security is fully restored. The Libyan antiquities department, badly under-resourced under Gaddafi, is closely involved in the project. Funding for the research has come from the European Research Council who awarded Professor Mattingly anERC Advanced Grant of nearly 2.5m euros, the Leverhulm Trust, the Society for Libyan Studies and the GeoEyeFoundation.

"It is a new start for 's antiquities service and a chance for the Libyan people to engage with their own long-suppressed history," says Professor Mattingly.

"These represent the first towns in that weren't the colonial imposition of Mediterranean people such as the Greeks and Romans. The Garamantes should be central to what Libyan school children learn about their history and heritage."

The Garamantes were probably present as tribal people in the Fezzan by 1000 BC. They appear in the written record for the first time in the 5th century BC. According to Herodotus, they were "a very great nation" who herded cattle, farmed dates, and hunted the "Ethiopian Troglodytes", or "cave-dwellers" who lived in the desert, from four-horse chariots.[2] Roman depictions describe them as bearing ritual scars and tattoos. Tacitus wrote that they assisted the rebel Tacfarinas and raided Roman coastal settlements. According to Pliny the Elder, Romans eventually grew tired of Garamantian raiding and Lucius Cornelius Balbus captured 15 of their settlements in 19 BC.

By around 150 the Garamantian kingdom (in today's central (Fezzan), principally along the still existing Wadi al-Ajal), covered 180,000 square kilometres in modern-day southern . It lasted from about 400 BC to 600.
\
The decline of the Garamantian culture may have been connected to worsening climatic conditions, or overuse of water resources.[3] What is desert today was once fairly good agricultural land and was enhanced through the Garmantian irrigation system 1,500 years ago. As fossil water is a non-renewable resource, over the six centuries of the Garamantian kingdom, theground water level fell.[citation needed] The kingdom declined and fragmented.
Posted by arclein at 12:01 AM

A walking wall of acacias to reforest the Sahara, very effective idea. So what is the holdup?

curiously it is actually happening. Sahel farmers have woken up to the need to grow acacias among their crops and have begun encouraging their growth. If everyone practices this and i believe they will, the result will be a good tree cover to the edge of the desert and a wall of humidity encouraging rainfall and expansion north of the Sahel.

In time we add in the Eden Machine and the expansion can become rapid, but in the meantime it has already started.