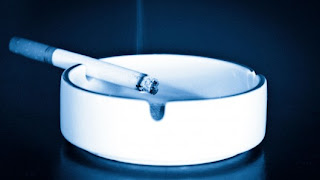 Someone is finally putting the numbers in proper perspective.  A smoker possibly pays a thousand dollars a year in cigarette taxes over the thirty years that he indulges.  He then dies a decade sooner and fails to pay his fair share of taxes for that decade. That is obviously worth a lot more on average that the thirty thousand he paid for cigarette smoking.

What this makes even clearer is that lost 3 billion in revenue in order to save 86 billion in medical charges and before counting in the extra tax revenue earned from the many new survivors.

This should put paid to any attempts by apologists for the smoking habit to claim that the habit pays its way.  It does not.  To do that it would have to be charged out at four times present cost and all smokers would have to be denied medical care.  Hmm. If they did that, smoking could even become unpopular.

I am fortunate in that I have never even tried a cigarette in my life and thus avoided the whole subject.  That was inspired by my father been told that if he wanted to see his sons grow up, he had to quit.  He was fifty six.  He threw his pack into the bushes as he left the doctors office (This was 1957) and came home and threw my mother’s pack also into the stove.  My mother fought to hang onto her pack.  That was the dramatic end of cigarettes in my home and it ended my curiosity and my brothers also.

Just about everyone else decides to actually try the damn things and inevitably gets hooked.

During the first 15 years of the Tobacco Control Program in , which cost in the region of US$1.5 billion, the savings made in direct health-care costs amounted to US$86 billion

In the past decade a line has been drawn in the sand in most major cities. Tax revenues from cigarettes are higher than ever, and most bars and restaurants no longer allow smoking within their confines. The days of smoking being the social norm are quickly turning into times when those lighting-up are viewed as an outcast minority, and when it comes to quitting, the evidence is clear that it's not just the smokers themselves who stand to benefit.

I gave up smoking three years ago - cold turkey. I don't say that to gloat, only to assure you that it is possible. That being said, giving up smoking is one of the hardest things I have ever had to do. Many people try, and fail, every year and those who do succeed in kicking the habit only manage to do so with much help and support. Don't worry, just because I am a quitter does not mean that I will turn instantly into the anti-smoking freak that I so opposed while I smoked. I would however like to touch on one or two more serious issues.

One: "Smoking is the #1 cause of preventable death, with more than 400,000 people in the every year dying of illnesses directly related to tobacco use and even secondhand smoke." (Source - CDC)

Two: "Tobacco-related illness saps the country of more than US$193 billion in health-care costs and lost productivity each year." (Source - American Lung Association/health.com)

You know this already: smoking kills. You don't need to be told that tobacco is responsible for about a sixth of the non-communicable diseases per annum. "Yeah, yeah", I would have said in my days as a smoker, "but it is my choice ... and just think of all the money I contribute in additional taxes!" You have heard that smokers argument before, no doubt.

So here is where it starts to get real. Quitting smoking has immediate benefits to your health, and the health of those around you. There is indeed a huge amount of evidence to suggest that after just one year of being smoke free your risk of heart attack is cut in half. In approximately five years you will be on a par with non smokers.

But, as the title of this article suggests, this is not just about why you should stop smoking. This is about why more should be done to help you do so. The good news is that smoking rates are falling. State data shows has had success in limiting tobacco use. The Statewide smoking rate dropped from 23.5-percent in 1992, the year before state anti-tobacco programs began, to 14.1-percent in 2010, according to the Department of Public Health. But is enough being done?

Another survey, published by the American Lung Association in January of 2011, suggests we could do more. While it gives the U.S. government good scores for the treatment of people with tobacco-related illnesses, it suggest that as many as 40 States are failing when it comes to anti-smoking programs (40 States Get An F In Tobacco Prevention, 2011).

As is rightly being suggested in many articles on this subject, it is time to put health before trade.

Consider this. During the first 15 years of the Tobacco Control Program in , which cost in the region of US$1.5 billion, the savings made in direct health-care costs amounted to US$86 billion. Read that sentence again. The $1.5 billion spent on tobacco control in has resulted in savings in excess of 60 times that sum. If you wish to make the argument that your smoking is doing good by way of taxes, then think again. During those 15-years roughly 3.6 billion packets of cigarettes that would otherwise have been smoked were not. The loss in tax revenue amounted to little over US$3 billion, less than 3-percent of the total health-care savings.

In addition, just because I am no longer a smoker does not mean I do not contribute to taxes. I just do it in other, more healthy, ways. As it happens, the US$2,500+ that I have saved by not smoking has been put to very good use.

I'm not trying to persuade you to give up smoking. Truth be told I never met a smoker who truly did not want to stop smoking, so I really don't need to. All I ask is that you consider both sides before you start up with the inevitable arguments to justify the habit. The bottom line is that, while not only is it fantastically good for your health, smoking cessation has a direct impact on reducing the cost of health care. Your health care (that you no doubt complain about the price of) is not cheaper thanks to all the smokers in your State, it is more expensive.
Posted by arclein at 12:01 AM